Here's our ongoing post with Wizards-centric reactions to Jason Collins announcing that he is gay.

Jason Collins announced that he is gay in this Sports Illustrated story, becoming the first active male athlete in the four major American sports to come out. Here are the reactions of his Wizards' teammates and other co-workers:

"We are extremely proud of Jason and support his decision to live his life proudly and openly. He has been a leader on and off the court and an outstanding teammate throughout his NBA career. Those qualities will continue to serve him both as a player and as a positive role model for others of all sexual orientation."

Bradley Beal on Jason Collins. "His sexual orientation has nothing do with the game of basketball. I’m supportive of him." #wizards

Beal: "I only see him as a great player first & a great asset to our team & guy who really helped us out. It’s not up to us to judge him."

Much respect to my teammate @jasoncollins34 for being #real

Garrett Temple on Jason Collins coming out as gay: "I had no idea. Me & Jason, we’re...right next to each other in the locker room."

Temple: "A lot of ignorant people are going to say some things but..to be the player to do it, much respect to him. I’m real proud of him."

@jasoncillins34 you have made sports what it should be and that's "OPEN" proud of you for being you. That's jump shot is still weak lol. 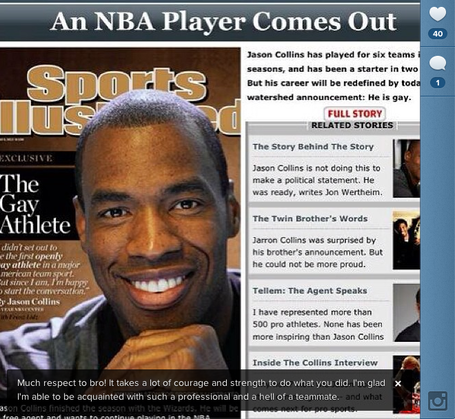 @jasoncollins34 much respect to you.It takes a strong dude to be the first. Your a hell of a professional and a hell of a teammate.

I appretiate you for coming out. I am sure it takes a lot of courage to do so. I am proud of you. Great teammate! Take care @jasoncollins34

Randy Wittman on Jason Collins: "My thoughts & everything are the same... He’s a quality individual as well as a quality player."

Emeka Okafor said Jason Collins called this morning to tell him that he was going to come out as gay in an article. "I didn’t expect it."

All the support I have received today is truly inspirational. I knew that I was choosing the road less traveled but I'm not walking it alone

Thank you to everyone who has reached out to me thru email, texts, calls, tweets, letters, and every other form of communication. #support

Extended comments from Okafor, Temple, Beal and Wittman are here, via Michael Lee.

I am proud of my brother @jasoncollins34. Great teammate and mentor!