Martell Webster emerged as the Wizards' starting small forward in 2012-13. We remember his season in our player evaluation series.

Our 2012-13 player evaluations continue. This time, we profile Martell Webster.

Contract status: Webster is an unrestricted free agent, and the Wizards have Non-Bird Rights on him because he only signed a one-year contract last summer. If the Wizards use those rights, they could sign him to a contract starting at 120 percent of his current salary (about $1.75 million). That means his first year could start at $2.1 million. With 7.5-percent raises, such a contract would look as follows:

If that does not meet Webster's asking price -- and it seems unlikely that is will -- the Wizards will have to use part of their mid-level exception to keep him. In the unlikely event that Webster gets an offer north of the MLE from another team, Washington would have a hard time keeping him.

Preseason expections: Webster was signed to be insurance off the bench, providing outside shooting if needed in a bench role. Given his back issues, it wasn't clear if he'd be a part of the regular rotation, but the Wizards were on a tight budget and Webster fit their price. He quickly showed in training camp that he was as healthy as he had been in years, seizing a spot as one of the team's top bench players before eventually moving into the starting lineup.

Offense: Webster fit his role to a T, becoming one of the league's feared outside shooters, particularly from the corners. A late slump bumped Webster down from his perch a bit, but he still finished sixth in the NBA in corner three-point percentage among players that attempted at least 50 shots. Webster was no slouch from the wings either -- he was 65th in the league in above-the-break three-point percentage among those with at least 50 shots attempted.

Webster's three-point proficiency was good enough for the Wizards to incorporate a new play into their playbook to take advantage of his shooting and John Wall's cross-court passing.

The play starts on one side with Wall running a standard angled pick and roll. Webster will stand on the opposite wing rather than the corner. 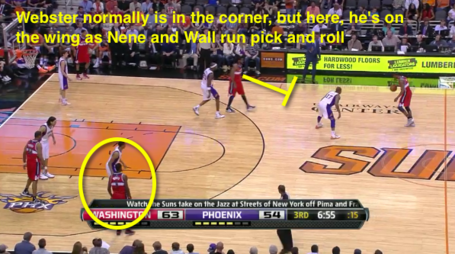 The speed pick and roll on the right side draws everyone's attention. Meanwhile, Webster will sneak to the corner. 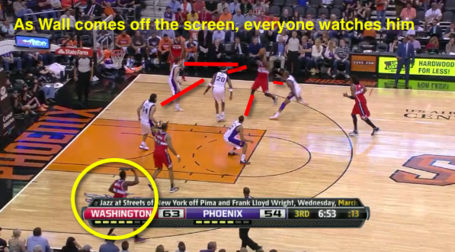 As Webster goes to the corner, Wall will throw a cross-court pass. Meanwhile, the other big man -- Jason Collins, in this case -- will set a flare screen on Webster's man, preventing him from recovering. 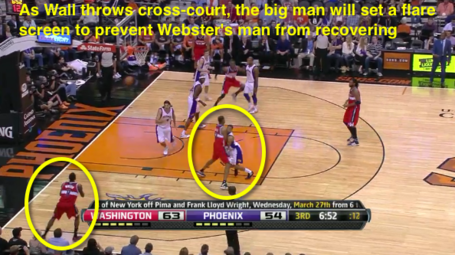 The end result is a wide-open three if executed correctly. 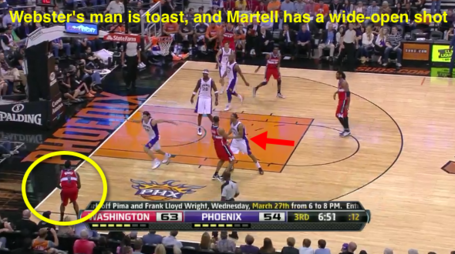 All in all, Webster's shooting was essential to an offense that didn't have much of it from the big positions. There were games where Webster didn't make much of an impact, but he was enough of a threat to open up opportunities for others, especially after Wall's return from injury.

Defense: Webster was not a stopper by any means, but he generally worked hard and was in the right spots. The key is that he didn't do anything to mitigate the offensive advantage that playing him gives you. The Wizards were only 1.1 points worse per 100 possessions with him out, despite the presence of Trevor Ariza.

Other stuff: Webster emerged as a strong locker-room voice, a passionate defender of Randy Wittman and Wall when things were not going well and a particularly amusing interview. The final personality trait probably doesn't matter too much for team success, but it was fun to cover.

Did he meet, exceed or fall short of expectations? He dramatically exceeded mine. I didn't know what to make of him when he signed over the summer, so for him to become one of the team's most indispensable players is a major surprise indeed.

Overall: The big questions for Webster now: can he repeat this performance, is he still as valuable to the organization as a whole with a bigger salary and was his success due to his play specifically or the team's desperate need for any three-point shooter that was passable defensively? The answers to those questions will determine fair value for his next contract.

How would you rate Martell Webster's season on a scale of 1 - 10?