We begin our look back at the 2012-13 season with our individual player evaluations. We'll start with Emeka Okafor.

Our look back at the 2012-13 season begins with our player evaluations. We're going in no particular order here, so let's start with Emeka Okafor.

CONTRACT STATUS: Okafor will make $14.5 million next year on the final year of his contract. He has an early-termination option, but has indicated he will not use it.

PRESEASON EXPECTATIONS: Okafor was brought in to provide some stability along the frontline, especially given Nene's slow recovery from injury. It wasn't clear whether he would start with Nene or play with someone else off the bench, but he quickly was installed as the starter once Nene went down. Given their hopes of being an up-tempo team, the Wizards hoped that Okafor's excellent defensive rebounding would help trigger transition opportunities. The Wizards also hoped his professionalism would rub off on young players in the locker room.

OFFENSE: Okafor spent a lot more time on the perimeter due to Washington's spacing issues, which explains why he posted the lowest true-shooting percentage since his second year in the league. Here is his shooting chart this season, via Basketball Reference: 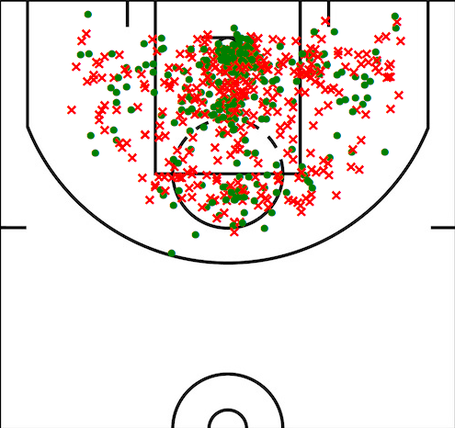 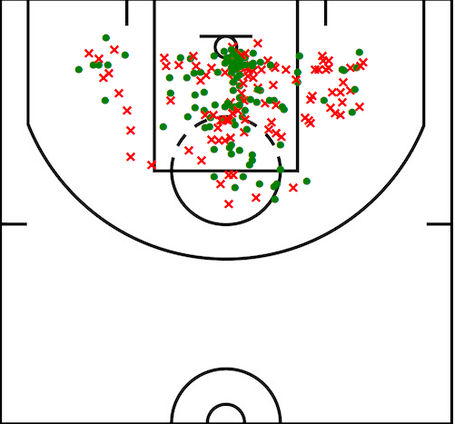 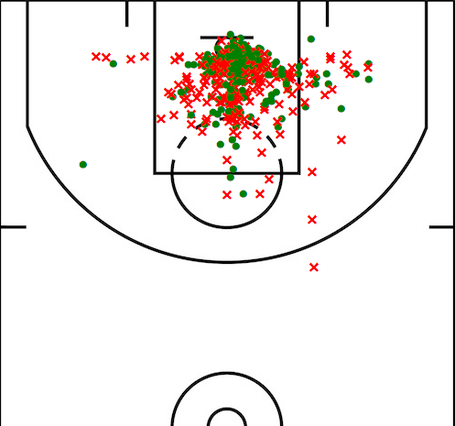 Okafor wasn't exactly effective on his additional mid-range attempts either. He shot just under 35 percent from outside of 15 feet, per NBA.com, and that was on 129 attempts. In 2011-12, he took just 13 attempts outside of 15 feet all season. In a vacuum, it made no sense for Okafor to fling so many mid-range jumpers, but because he played so often with Nene, a similarly-ineffective shooter that prefers to operate closer to the basket, Okafor had to be put there for spacing purposes. When he was left alone, he didn't hesitate, because that's the only way he could be a threat.

Okafor's low-post scoring was decent, if mechanical, and he gobbled up a number of points off John Wall's dribble penetration and the offensive glass. But ultimately, he wasn't an effective offensive asset this season.

DEFENSE: This is where Okafor held his most on-court value. He teamed with Nene to provide an excellent backline and was one of the key reasons why Washington finished with the league's fifth-best defensive efficiency. In contrast to their overlapping offensive games, Okafor and Nene proved to be a complementary defensive combination. Nene's ability to guard smaller players and play low-post offensive players allowed Okafor to act as a rim protector, which is what he does best. The Wizards held teams to just 97.1 points per 100 possessions when the two were in the game.

Okafor was occasionally prone to breakdowns when dealing with misdirection, and he had an annoying knack for missing the most needed defensive rebounds despite his obvious strength there. But overall, he was a major asset on this end.

OTHER STUFF: Many point to Okafor's verbal confrontation with Wall after a late-February game against the Pistons as the turning point in Wall's season. For that, he should be commended.

DID HE MEET, EXCEED OR FALL SHORT OF EXPECTATIONS? I'd say he firmly met them. He was brought in to be a solid veteran rebounder and defensive presence, and he did just that.

OVERALL: Given Nene's durability issues and Kevin Seraphin's lack of development, it was nice to have Okafor around this season. I wish there was some way to preserve the defensive brilliance of the Nene/Okafor combination without giving up so much on the other end, but I'm not sure that exists. In the meantime, Okafor will at least be a good role player in the final year of his contract.

HOW WOULD YOU RATE OKAFOR'S SEASON ON A SCALE OF 1-10? Vote below.