Nene trade: Will the future bring as much happiness as the present?

While the Nene trade has mostly worked out well for the Wizards in the present, it's still unclear whether the future will bring the same kind of joy. We look at Nene's injury woes and wonder if his game will age well.

Share All sharing options for: Nene trade: Will the future bring as much happiness as the present?

This is Part V of a six-part series noting the impact of last March's stunning deal for Nene. In this section, we note concerns that Nene's game may not age particularly well.

MORE: INTRODUCTION | ON THE COURT | THE OTHER SIDE | THE SALARY IMPLICATIONS | THE LOCKER ROOM | THE VERDICT

By now, you've read largely happy reviews about Nene's on-court impact and his locker-room presence. You've also read that while his contract is long, it's easy to argue paying him for four more years is preferable to paying JaVale McGee a little less for the same amount of time. So far, a lot has worked out for the Wizards.

But even as we analyze this deal at this point in history, we have to remember that the book isn't close to being finished. In this specific case, we have three more years left to see what happens. Three years is a long time, particularly when we're talking about a veteran with a huge contract like Nene.

Remember this: the Nuggets, at least reportedly, claimed they had "buyers remorse" when unloading Nene last year.

League source says Nuggets had experienced some "buyer's remorse" after signing often-injured Nene to a five-year, $67M deal in Dec. '11.

What could that mean? Any number of things. Maybe they loved McGee and didn't care if Nene was the bait. Maybe they decided they didn't need Nene with Kenneth Faried's emergence. Maybe they just made a bad decision. 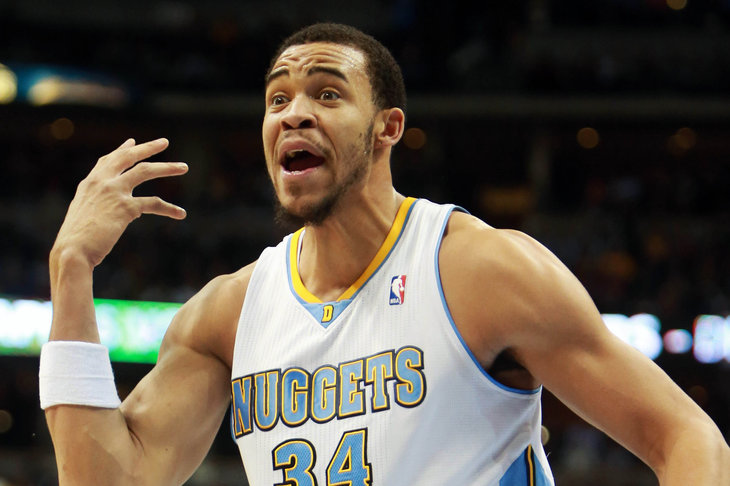 But the largely-accepted view at the time was that they were annoyed by Nene's nagging injuries that season and didn't think his game would age particularly well. Nene had been healthy in the years prior to 2011-12, but he played in just 28 games with Denver that season due to a variety of ailments. Since coming to D.C., he's played in just 55 of a possible 71 games (including several where he was on a minutes limit) with ... a variety of ailments.

This is a small sample size, to be sure, and it doesn't measure the importance of Nene's defense or his ability to be an outlet for a half-court offense that has no other options. But it does make you wonder if his body can hold up to playing major minutes going forward.

Hopefully, he gets over these and is perfectly healthy for the final three years of his deal. But still, we have to account for the possibility that the Nuggets were on to something and realized these nagging injuries would only pile up as Nene got older. If that's indeed the case, the Wizards are going to be forced to bear the brunt of a huge contract for a declining player.

This was the risk the Wizards knew they were taking when they made the trade. So far, the influx of professionalism and on-court reliability has been beneficial. Just know that the grade for this trade could easily be flipped based on what happens going forward.