The other side of the Nene trade: Nuggets fans enjoying JaVale McGee

How have Denver Nuggets fans coped with the stunning Nene-for-JaVale McGee trade? Pretty well, in fact.

Share All sharing options for: The other side of the Nene trade: Nuggets fans enjoying JaVale McGee

This is Part III of a six-part series noting the impact of last March's stunning deal for Nene. In this section, we touch base with two lead writers of SB Nation's Nuggets blog Denver Stiffs to see how the trade has affected their team. As it turns out, both are happy with having JaVale McGee.

MORE: INTRODUCTION | ON THE COURT | THE SALARY IMPLICATIONS | THE LOCKER ROOM | THE FUTURE | THE VERDICT

I can't believe it has already been a year since the big trade. JaVale still feels so new to the Nuggets and he's still finding his place with the team that it feels like he just got here.

At the time, the trade was said to be a money-saving deal by the Nuggets. Then, they turned around and handed McGee a big contract in the offseason, and he makes just $3 million less than Nene this season.

Am I happy with the deal? Yes. I'd make the trade 10 times out of 10 just based on McGee's potential and the fact that I think Nene hit his ceiling in Denver.

We've seen discussion on Denver Stiffs centering around Nene. He easily could have played center in Denver with Kenneth Faried at power forward and a solid backup big in Kosta Koufos, but I like that Masai Ujiri swung for the fences with McGee. Even if Nene is the better player right now, he wasn't bringing a championship to Denver. Can McGee be that guy? That's the question we're waiting to find out. 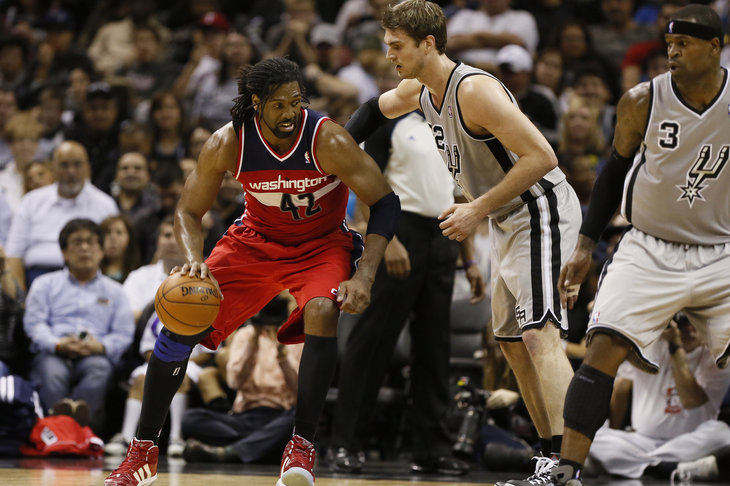 How Nene has changed the Wizards' philosophy.

McGee's development has been slow -- look no further than George Karl refusing to start him and his minutes being down to his 2009-10 levels at just 18.7 per game. It's as if Karl is trying to break McGee down and then rebuild him. We've seen McGee get pulled quickly from games where he takes a bad jumper, doesn't get back on defense or is out of position on either end of the floor.

On the flip side, we've seen Karl trust McGee to close out games, and McGee has put up big games against top teams. Of McGee's 27 games of double-digit scoring, 16 of those are against current playoff teams and the Lakers. Add in that he's a fantastic teammate -- always getting up off the bench after big dunks, shots and blocks -- and you have perhaps the most intriguing player in the league.

We've seen McGee trying out different moves on the floor this season. In addition to his hook shot, he's been working on his jumper and various post moves. On defense, he has been more disciplined as of late with staying down on blocks and focusing on rebounding. It's a process and one where the coaching staff has to decide how much they want to let McGee work on his game in games versus trying to just win. At the beginning of the season, it looked like Karl was far more concerned about winning games than he was developing McGee, but I think both player and coach have been working better together lately. You see that with Karl playing him in key situations.

I love watching McGee play and I hate how things like "Shaqtin a Fool" try to make a caricature out of him.

His asthma is still a concern, and I don't know if anyone is certain if he can physically be a 30-minute-per-game guy. I've also been debating if McGee is a guy who may coast at times during an 82 game season, but will show up for big games and the playoffs. He'll be making his second playoff appearance this season and I am excited to see how he performs. I love watching McGee play and I hate how things like "Shaqtin a Fool" try to make a caricature out of him.

I am glad he's a member of the Denver Nuggets and I'm excited for his future. I also miss a lot of what Nene brought to a team and I'll continue wishing him success with the Wizards.

JaVale is an enigma, wrapped in a riddle, wrapped in a 7' freakishly athletic player, wrapped in a Twinkie. I can say without a doubt that he had grown in some respects, I can also say that he still hasn't progressed the way you would like for a player of his relative talent.

Where JaVale has improved: His desire to work and improve his game seems to be exponentially larger than when he first came to Denver last season. He definitely looks like he is trying to improve those aspects of his game where he struggles the most (team defense, boxing out, not trying to dunk everything). The effort is there. The desire is there. There are some nights where he can single-handedly turn a game for you with amazing dunks and spectacular blocks. JaVale has improved somewhat on his block anticipation, as well as not going after every single shot. He has varied up his offensive game and has incorporated a long hook shot that will make him even more dangerous once he polishes the move. All in all, I appreciate JaVale's desire and his effort night in night out.

Where JaVale has not improved: Unfortunately, team defense and blocking out are areas that JaVale still struggles with mightily. He is often left out of position and will give up many offensive rebounds. His lack of knowledge on defensive rotations can sometimes kill the defensive flow of the team ... often leading to wide open layups in the interior of the defense. JaVale is also a space eater on offense and tends to "camp out" close to the lane when he should be looking for more flow in the mid-circle. If it's not one of his go-to moves, he seems lost a bit, almost like his body is two steps ahead of where his mind is. He still needs to slow down and breathe, not get so excited to do something and make a series of mistakes.

All in all, I'd say that JaVale has improved mightily. His approach to the game has matured just enough to make him more dangerous. However, he still needs to slow it down and let the game come to him. Maturity will be his next step and I'm relatively confident he can get there.