He's back: How John Wall won the 76ers game

John Wall's recent slump came to a head last week with a particularly dispiriting performance and postgame interview. But all that seems like a distant memory following a clutch showing Sunday night against the Sixers.

Share All sharing options for: He's back: How John Wall won the 76ers game

WASHINGTON -- Somewhat lost amid the brief hysteria that was Ankle-mageddon-gate-pocalypse following the Washington Wizards 90-87 victory Sunday night over the Philadelphia 76ers was the encouraging, clutch performance of John Wall during the game's closing minutes.

Following Bradley Beal's nerve-racking ankle roll with 2:08 to play in the fourth quarter, Wall found himself the lone franchise savior on the floor with the Wizards trailing 87-84 and in need of some heroics.

Wall didn't display them coming out of the ensuing timeout - within five seconds he had turned the ball over, conjuring up memories of Friday's 96-88 loss to the New York Knicks, in which Wall had a couple turnovers down the stretch that stalled a potential comeback and helped New York hold on for the win.

But Wall recovered quickly this time, and would go on to score the game's final six points. Thirty seconds after committing the turnover, he buried a long jump shot to pull the Wizards to within one with 1:33 to play. Then after Jrue Holiday missed a jumper, Wall corralled the rebound and five seconds later drew a foul on one of his patented hellfire-sprints to the basket.

Recapping Sunday's win over the Sixers 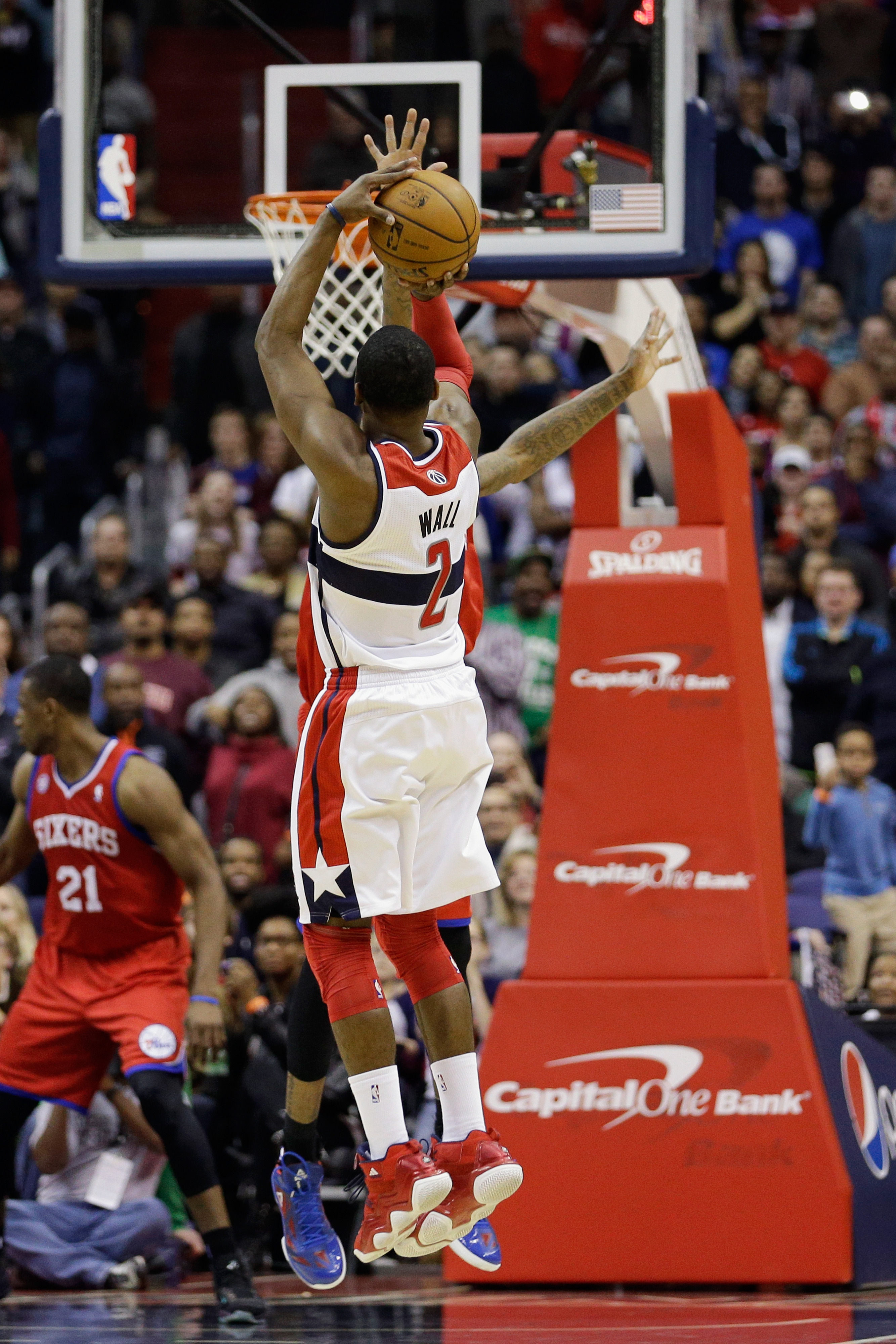 A summary of the Wizards' win over Philly

Wall sank both free throws to put Washington up 88-87 with just over a minute left, and seconds later blocked Evan Turner's layup attempt. Nene -- who played Robin to Wall's Batman -- corralled the rebound and later came up with a huge offensive board off a missed three-pointer from Martell Webster, giving the Wizards a fresh possession with 27.6 seconds to go.

Without Beal to help stretch the floor or serve as an outlet, Wall ran down the clock, dribbled to just inside the three-point arc and, with Holiday giving him space, rose up for the shot.

Wizards fans have become all too accustomed to seeing Wall brick this kind of shot, but this one hit nothing but net (while also going through the hoop). Wall looked calm, collected and confident as he flicked his wrist, quickly began his victory-backpedal and, according to several tweeports, stared ice daggers through David Falk's eyeballs.

The Sixers still had a chance with 4.4 seconds to play, but when Dorell Wright's desperation, fall-away three-pointer from the corner clanged off the rim, not only had the Wizards ended their two-game losing streak, but Wall had put an end to recent concerns over his mindset.

Boy, that Pistons game seems like it was ages ago, doesn't it? After going 3-for-9 from the field and committing seven turnovers in a 96-95 loss to Detroit last Wednesday, it didn't take divination to hear Wall's terse postgame comments and Wittman's thinly-veiled critique and conclude that Wall was sulking amid a tough five-game stretch that saw him shooting just 29.6 percent and averaging 4.6 turnovers per contest.

Wall put some of those worries to rest following the Knicks game, when after committing five turnovers -- including the two late in the fourth quarter -- he took responsibility for the loss, despite an otherwise decent line of 16 points and six assists.

"I like the ball at the end of games. When it's those types of plays, you want to be the hero. You want to have the pressure." -John Wall, on coming through in the clutch

And then came his performance Sunday, highlighted by perhaps his most-breathtaking play of the year, a midair, 360-spinning layup towards the end of the first half.

As for those final jump shots, "I've been more comfortable taking them," Wall said. "I just got to keep having confidence and just try to knock it down. I know defenses are going to play off me and give it to me, so I just got to take it with confidence."

"He's got great confidence, and that's what you have to have obviously at this level, and you know, it came through tonight," Wittman said of his third-year point guard. "It's a stepping stone. I think New York was better [than Detroit]. He's making the strides now."

Wittman continued on with something of an extension to his radio interview last week, which served as a defense of Wall in the face of outside criticism.

"I don't know how hard it is to tell you how hard it is to do what he had to do this year, in terms of sitting out three-and-half months without any activity of any kind on his feet, and then for me to thrust him in as soon as he's able to do something, and then to expect him to have his rhythm and legs and all that," Wittman said. "So it's been frustrating for him. He wants to win as bad as anybody, and when he's not playing the way he's capable, he gets frustrated a little bit. But I thought the last couple games he's calmed down and fought through it. He's got to stay patient still. I think as we move along, his legs and all that stability stuff that he doesn't have will eventually come back."

And just in case anyone forgot, Wall's teammates still have his back.

"That's what he's been working on the whole season, and that's the answer for the critical guys who have been talking bad about him." -Nene, on John Wall's game-clinching jumper

"I think the last few games I've been doing better, but my teammates have built my confidence back up, telling me to keep playing and trust in my abilities," Wall said. "I just want the ball down the stretch and luckily I made a shot today."

"John made some really big plays tonight," Trevor Ariza said. "When he got the ball, went down the court, drew a foul, got to the free throw line and then come back and hit a jumper, I think was big, especially because a couple weeks before he probably would have tried to get to the basket [rather] than shooting. That just shows how he's still growing up throughout the year and the steps that he's taking to become a better player."

I asked Nene what he thought that last jumper could do for Wall's confidence.

"That's what he's been working on the whole season," Nene said, pausing briefly before continuing, "and that's the answer for the critical guys who have been talking bad about him."

In the middle of Wall's postgame interview, Webster walked up behind the scrum of reporters and shouted a couple questions, proving that the bit applies to vets as well as rookies.

Smiling, Wall tipped back his head and sheepishly asked, "Would you sit down, please?"

At least on this night, he could have asked the same of his critics.