John Wall's jump shot has been completely different over the last few weeks, and it was especially on point in Wall's 47-point outburst against the Grizzlies. But what has really changed with Wall's shooting motion? We break down film to find out.

I missed John Wall's 47-point game against the Memphis Grizzlies live. Thanks, Passover, you good-for-nothing holiday. That eliminated some of the thrill of experiencing the game up close at Verizon Center. I'm very happy for Amin and Satchel for what they got to work through last night.

But, of course, I wasn't going to wait too long to watch the dang thing. So, I sat down on my laptop and watched every play on MySynergySports.com. (Pretty great service, that is). While watching, I noticed some significant mechanical changes to Wall's jump shot that bode well for the future.

Join me as we break down each of Wall's 13 made field goals. 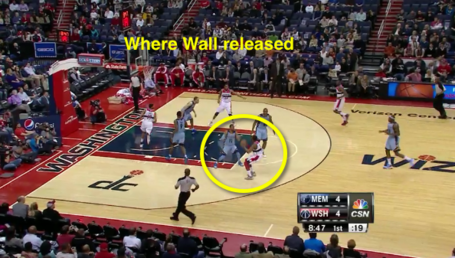 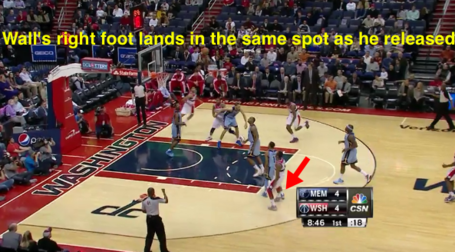 Had I watched this attempt live, I wouldn't have been wild about it. Mike Conley was there to contest Wall's jumper, and not knowing that Wall was going to go off, I would have expected a miss. But I loved two things about this first attempt.

First, Wall dribble-probed nicely in transition, careening sideways to see if he could create anything instead of just crashing into the lane. That shows maturity, change of direction, change of pace, etc.

Second, as I highlighted in these screenshots, Wall jumped straight up and down on this jumper. One of the biggest issues he's had with his shot -- and one he's noted several times -- is his tendency to fade away. Staying completely vertical is a huge key to making his shot seem more consistent. He was perfectly on balance on this attempt, even with Conley contesting well. That explains why the shot went in.

This too isn't great selection, but look at Wall's shooting motion. I slowed it down to emphasize how Wall went straight up and down despite Zach Randolph closing out. He didn't fade away. He didn't jump too far forward. He just got his body nice and lean, elevated and landed in the exact same spot as he jumped. Beautiful. 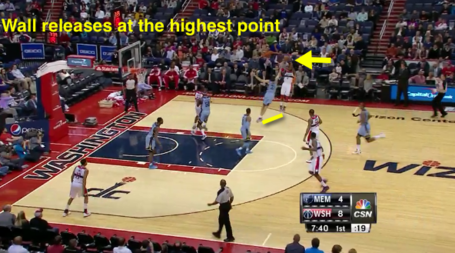 This pull-up in transition featured the same vertical jump as the previous two, but I want to focus on a different element of Wall's shot that needed fixing: his release point. As Wall noted above (that tweet's from the Hornets game), he sometimes didn't let go of the ball until he was already on the way down, which makes any shooting motion look choppy. I tried to capture the very moment in this shot when he let go of the ball.

Notice a) how much elevation he gets on this shot relative to Tayshaun Prince's contest, and b) how high his actual release point is. That's letting the ball go at the highest point. 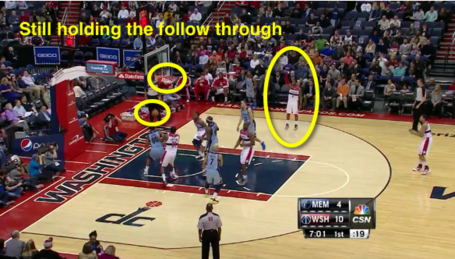 The ball is already well through the net, and Wall is still holding his follow through. If Wall's going to shoot this well, he can hold that pose as long as he damn well pleases.

On a serious note: the follow through has been an issue in Wall's shot since last season. As I noted last February, Wall tends to shoot significantly better when he finishes his motion than when he tries to pull the string. I've seen much more of the former and much less of the latter this season.

OK. On the one hand, this is an incredibly difficult shot that Wall has no business making. A stepback contested fadeaway on the left baseline where you land behind the backboard? Come on.

On the other hand ... there are two things about this shot that impress the hell out of me and demonstrate Wall's improved mechanics. First, notice where Wall's right foot is when he is preparing to step back. 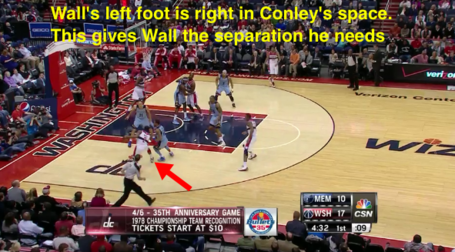 A proper stepback is difficult to execute and even more difficult to convert, but the first key is that right foot if you're stepping back to your left (it's the opposite if you're going to your right). To get the separation needed, a player needs to jam it right into his defender's foot space. That's how one gets the maximum effect when he pushes backwards and into his shooting motion. Wall's ability to plant that right foot right next to Conley's makes this shot possible.

The other great thing about this attempt: watch the video and notice how Wall, even as he falls away, squares up to the rim. He pronates his body a bit to make sure he's facing the basket instead of falling out of bounds. It's a small thing, but it makes a big difference here. By squaring up, Wall at least gives himself a chance to make the shot. 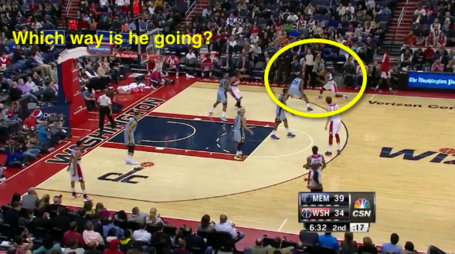 This was probably a carry, but as long as the refs won't call it, Wall can keep trying that high dribble. It used to be that he could only cross over right-to-left with this move, but he's developed a nice inside-out dribble to act as a counter with either hand.

On this play, Quincy Pondexter doesn't realize he has help going right, and he fails to shade Wall to the middle. Wall crosses him up and nails a jumper in his face. Wasn't great form, but Wall was feeling it on this night. 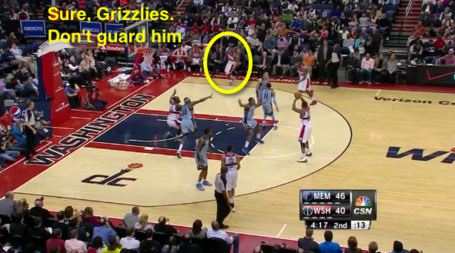 Wall's not exactly a huge three-point threat, but seeing as he's hit everything he's thrown up at the basket so far, the least the Grizzlies could do is actually guard him. Open three, swish.

First of all: COME ON.

Second of all: notice how Wall uses both picks to confuse Prince. He starts by going right into Prince's screener, which tilts Prince to the right. He then starts to go back to his left, which tilts Prince the other way. By the time Wall whips that crossover on Tony Allen, Prince is off-balanced and can't step up to help properly. This is a really intelligent read of the entire floor by Wall. 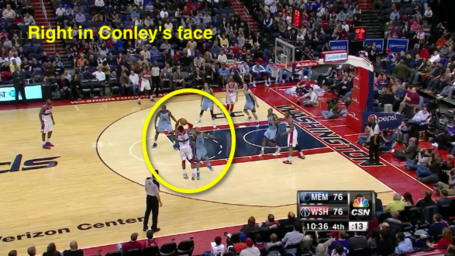 This is how you know Wall was feeling it.

Another insane shot that Wall won't make under normal circumstances. Bayless defended this as well as you possibly could.

Still ... as noted in the previous stepback, notice where Wall's right foot is planted as he steps back. 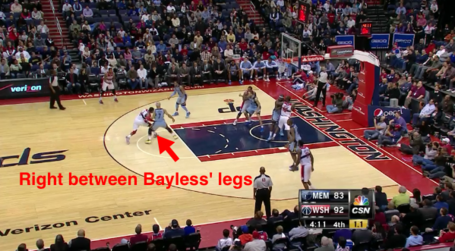 That's how you have to get separation if you want to execute a stepback. Bayless made an incredible defensive play to overcome that foot placement, but in the future, Wall will be able to victimize other guards if he can replicate that footwork. 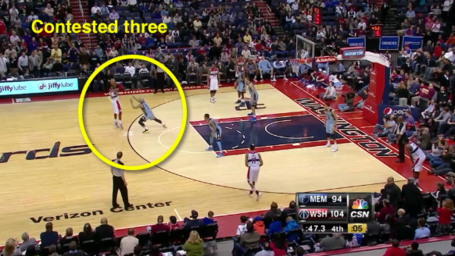 Wall isn't going to hit all of these shots all of the time. If he did, he'd be the best player in NBA history. Like any other point guard, he will have some nights where the shot isn't falling.

But this recent shooting improvement is no accident. Wall has made mechanical switches to his jumper, addressing so many critical weaknesses in the motion. He's jumping straight up and down instead of naturally fading away. He's releasing the ball at its highest point. He's jamming that right foot into the defender to set up stepbacks instead of just contorting his body. He's squaring up properly. He's holding his follow through.

Rebuilding a jump shot doesn't happen overnight. Wall's jumper arrived as broken as any could possibly be when he was a rookie. Over time, he's slowly addressed all the holes in his motion, and we're now seeing the fruits of his labor. As Chris Singleton said:

Singleton on Wall's J: "A crazy 2 or 3 weeks, right? His shot completely changed, from that hitch in his shot, to you don’t even see it."