John Wall had a career night against the Memphis Grizzlies. Now that the dust has begun to settle, where does his performance rank in NBA history.

John Wall went medieval on the Grizzlies. Memphis came into its game with Washington with the NBA's second best defense overall and arguably the best defensive backcourt on the planet. Despite the absence of running mates Nene and Bradley Beal, Wall scored 47 points off of 22 shots, got to the line 24 times and chipped in eight assists and seven rebounds on the way to Washington's 26th win of the season.

And that doesn't make him special. Well, it does, but maybe not quite as much as you thought.

According to Basketball-Reference.com, 27 players Wall's age or younger have scored more than 40 points in a game over the last 10 years. While the usual suspects of LeBron James, Chris Paul and Kevin Durant had big games early in their careers, so did Rodrigue Beaubois, Charlie Villanueva and Al Harrington. Most of the players to punch above their weight class were, like Beaubois and Ramon Sessions, guys with good ball skills who got hot from the outside when they were still flying under most teams' radars. 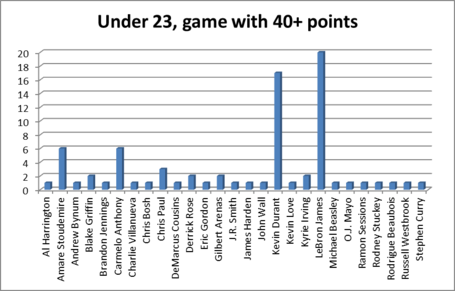 On the other hand, other than the two three pointers he hit, nothing about Wall's shot chart against Memphis screams fluke. Sure, he hit seven of his 11 shots inside the arc and outside the paint, but it's not like half of his points came off of three pointers. Wall shot well from mid-range, got to the line when defenses tried to adjust for his shooting and didn't make too many bad decisions with the ball. 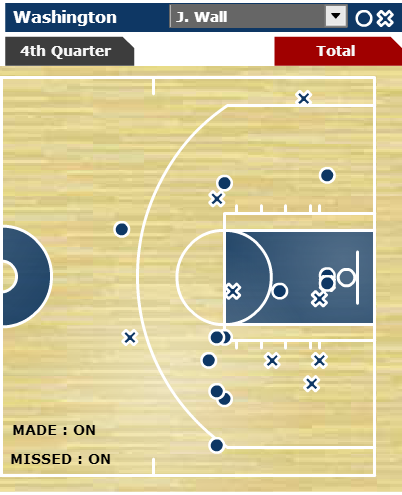 It's possible that Wall's big game was a complete fluke. It's just not very likely. As Mike pointed out this morning, Wall has improved the mechanics of his jump shot, something that should make further improvements to his accuracy far easier to come by. After a rough start during his first month back from injury, Wall has been shooting even better than he did to close last season.

A lot of Wall's offensive value comes from his pass-first instincts. Despite his overwhelming physical advantages, he'll always look for the open man, a trait that becomes far more valuable if defenses have to game plan around his scoring.

If his jumper continues to fall at even a league-average rat, this probably won't be the last time Wall approaches the 50 point threshold.