The rookie guard is starting to draw a lot of attention for his play over the past couple months, and he justified the praise Friday night with a career-high 29 points against the Knicks.

Share All sharing options for: Bradley Beal's development takes another step with a new career-high against the Knicks

WASHINGTON -- The reviews are beginning to stream in on Bradley Beal's rookie season, and so far they've been overwhelmingly positive. Some even suggest that it's Beal, rather than annointed franchise-savior John Wall, who is best equipped to one day in the near future pull the Washington Wizards from the ranks of the NBA's annual bottom feeders.

Beal did nothing to throw cold water on those assessments last night in a 96-88 loss to the New York Knicks, scoring a career-high 29 points and pulling down a team-high 11 rebounds while generally keeping his team competitive with the Atlantic Division leaders.

Beal was the main reason the Wizards were even in this game down the stretch. Up six at halftime, the Knicks pushed the lead to 11 five minutes into the third quarter and appeared poised to run away with the game.

But keyed by Beal, who scored 12 points in the quarter, the Wizards answered with a 21-6 run of their own to go up 77-73 heading into the fourth, where the Knicks quickly retook the lead as Washington's offense crumbled.

"I was trying to make plays. I was in the zone and I was just trying to do whatever it took to be able to get the team rolling," Beal said after the game. "[The opponents] always make runs. It's a game of runs. I just try to give us some type of boost of energy and enthusiasm."

Recapping Friday's loss to the Knicks 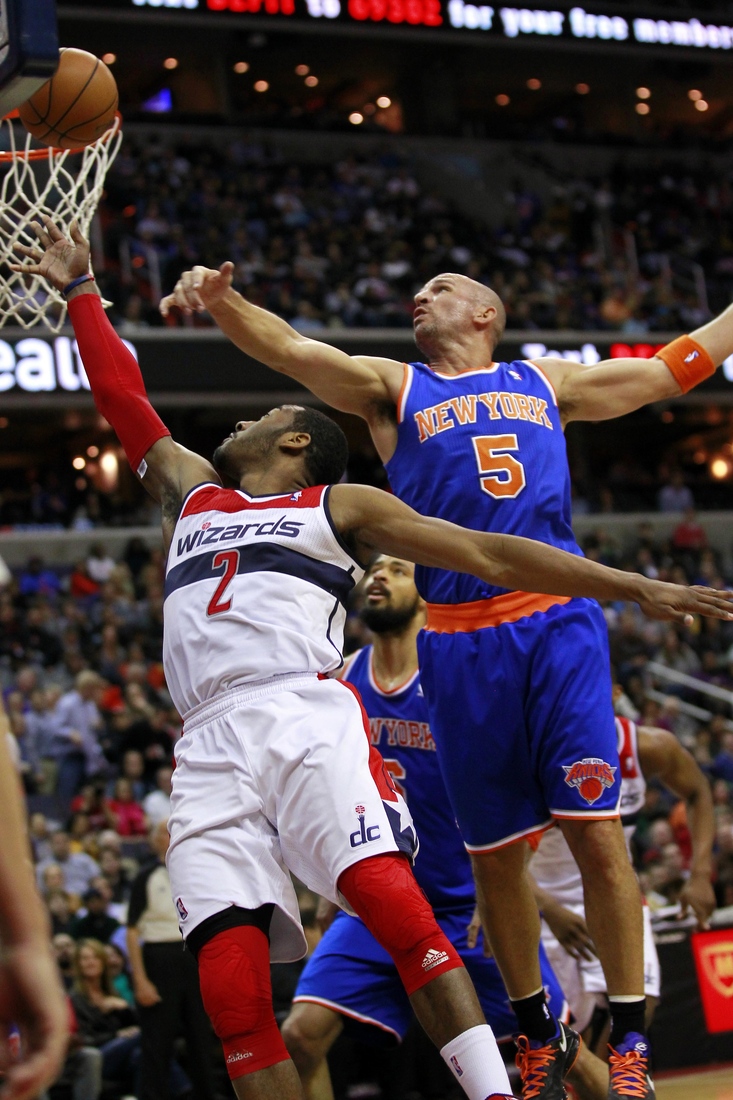 A summary of the Wizards' loss to New York

Beal made a three to bring the Wizards within one with four minutes to play, but then missed couple key free throws down the stretch before a running jumper by Raymond Felton iced things with 32.5 seconds left.

"Too many free throws missed by me," Beal said. "I think I only missed two or three, but those are crucial free throws that could have had a big impact in the game and I’m really beating myself up about it, but I just to move on from it."

Despite the misses from the charity strip, Beal's game was even more impressive than his final stat line. His rebounds weren't cheap -- he skied for most of them, and and even pulled a few down over Knicks big men Tyson Chandler and Amar'e Stoudemire. Nearly all of his points came within the flow of the offense and as a result of his off-ball movement. On one play in the second quarter, Chandler leaked out to help guard Wall on a pick-and-roll, but Beal snuck down beneath the basket and Wall found him for an easy dish and dunk.

After struggling early in his rookie season to adapt to the speed of the NBA, Beal credited his growing experience with helping him relax on the court.

"It's really just showing. You can just see how calm I am. I'm really starting to just be relaxed. I'm not pressuring myself," Beal said. "...Coach and my teammates as well do a great job of just setting me up and putting me in positions to make those plays and my confidence is sky high. Ever since January on, I think I've been playing pretty well."

Wizards Coach Randy Wittman was asked after the game whether he has put more of an onus on Beal to makes plays given Wall's recent struggles.

"Well, Beal's kind of created that on his own too, with the way he's played and the way he's developed," Wittman said. "So, not necessarily has anything to do with John. I think it's more Bradley's development, and the things he can do and the comfort level he's at now in doing those things, has added me putting the ball in his hands."

"We're only scratching the surface. We have a lot of things we both have to improve on. The sky's the limit for us." -Bradley Beal on himself and John Wall

"Lately coach has been putting the ball in my hand a little bit more, and I'm just doing a pretty good job of making sure I'm taking care of it more than anything and just trying to make the play that's best for our team," Beal said.

Still, Beal acknowledged the role Wall has played in his development and emergence as Washington's top offensive option. Beal said he can feel his and Wall's feel for each other growing "every game."

"You can just see on the break, it's hard to stop us because [Wall is] either going to kick it out to me or he's going to lay the ball up, so it just puts the other team in a bind," Beal said. "We always make eye contact. I always know where he is, he always knows where I am, so that connection is always there. We just have to keep it up. We're only scratching the surface. We have a lot of things we both have to improve on. The sky's the limit for us."