Are we witnessing honest-to-goodness development from John Wall?

What in the world has gotten into John Wall?

Share All sharing options for: Are we witnessing honest-to-goodness development from John Wall?

WASHINGTON -- Let's get one obvious caveat out of the way: Yes, the Wizards played just one game last night, and only four in the last week.

But goodness, has John Wall looked like a completely different player than one Wizards fans are used to. You know the one, the wondrously-gifted point guard with blinding speed and suburb court vision held back by a woebegone jump shot and seeming inability to slow down on offense.

Well, something has happened to that John Wall, namely, he's been nowhere in sight for the last three games while averaging 26.3 points, 11 assists and 5.7 rebounds with just three turnovers in nearly 38 minutes per game. Over that same span, he's shot 59 percent overall and 80 percent from three-point range. Before last Saturday's game against the Bobcats, Wall had only made 1-of-17 threes this season. Since then, he's made five of his last six attempts from deep.

We asked on Twitter last night for the last time Wall had such a dominant three-game stretch. The consensus answer seemed to be: Never.

The transformation was most stark Friday night against the Hornets, when Wall shot 12-of-15 (almost all them jumpers of some variety) and connected on all three of his three-point attempts en route to a season-high 29 points. Fans are not used to that kind of hyper-efficiency from Wall. It's all been so sudden, it's almost like he got a software upgrade after watching Deron Williams torch the Wizards with 11 three-pointers in a March 8 loss to the Nets.

Recapping Friday's win over the Hornets 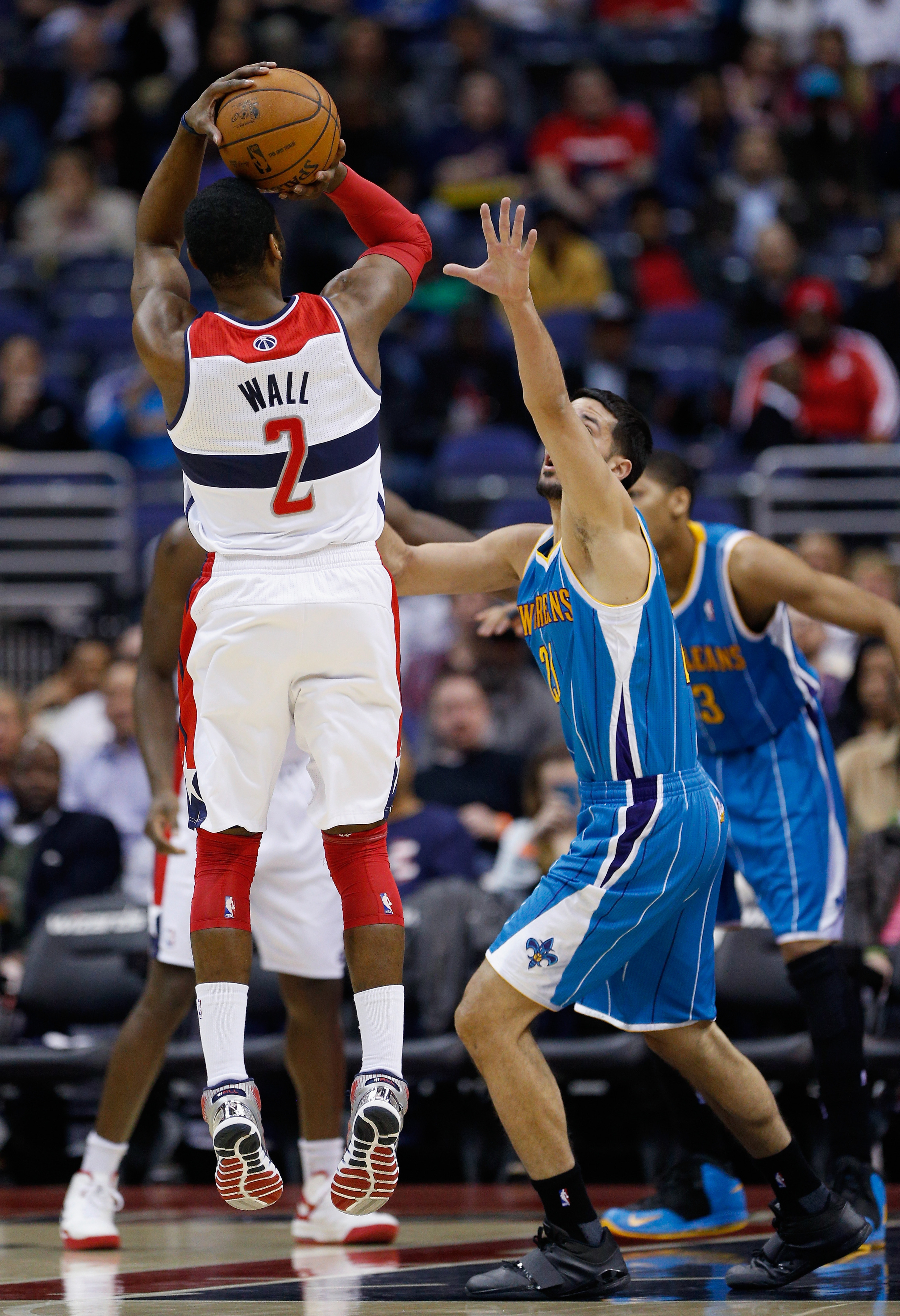 A summary of the Wizards' win over New Orleans

But is this version of Wall for real? It's doubtful that a player who was previously making 6 percent of his threes will stay this blistering for long, or that Wall will keep shooting 80 percent from the floor. But is his confidence to the point now where his jumper might actually be semi-reliable?

For what's it's worth, after the Hornets game Wall credited his hot shooting to confidence and getting in to an early rhythm. He also acknowledged that he has tendency to release the ball at different points in his jump shot, and said he's been working on shooting at the height of his jump. As for the critics who say he can't knock down a three:

"Doesn't bother me at all," Wall said. "You look at Jason Kidd, he didn't start making threes until later in his career. Long as I can make the mid-range, [am] improving my game and helping my teammates out, that's all that matters to me."

But for years the scouting report on Wall has been: Let him shoot, keep him out of the paint and away from the basket. Well, the Hornets followed that scouting report to perfection in the first half Friday, and as their coach said after the game, they got burned.

"In the first half we gave them way too many open looks. The ability to respect an NBA player wasn't there. I thought John Wall was disrespected tonight," Hornets Coach Monty Williams said. "We just let him shoot shots like he couldn't make them, and he made us pay. You want to keep out of your paint but you don't want to give him shots, and I thought our guards didn't compete at a high level to give our team a chance to win for 48 minutes."

A reporter asked Williams if he was willing to live with kind of shots Wall kept hitting (i.e. jumpers).

"No, not like that," he said. "You want to get a hand up. [In the] second half he made tough ones. In the first half, I thought he was just getting open look after open look. You can't disrespect a guy like that. He's a number one pick, an NBA player, one of the better young players in the NBA. You tip your hat to him. He took what the defense gave him, and he made us pay.

When was the last time an opposing NBA coach mentioned Wall and 'rhythm' in the same thought? Wizards Coach Randy Wittman said the work Wall puts in on his shot during practice is beginning to show up during games.

"Doesn't bother me at all. You look at Jason Kidd, he didn't start making threes until later in his career. Long as I can make the mid-range, [am] improving my game and helping my teammates out, that's all that matters to me." -John Wall, on critics saying he can't shoot the three

"I've kind of sensed it here coming up these last couple games. He's shooting the ball. [He] works every day, still a work in progress, but it's much more, the shot is much more repetition, same shot over and over again instead of, which he's had at times, taking different shots. A set shot, a jump shot, a fadeaway. That's been the main thing," Wittman said. "He's been really diligent in [working on it]. There's a good way to miss a shot and bad way, if that makes any sense, and his misses this last week have been really good misses. I've felt really good about where his mind was, too, in that aspect. Tonight he came out and proved that."

Mike asked whether Wall had been working on any specific mechanic aspect of his shot, but Wittman maintained that repetition was the key.

"Everybody's shot is different. Larry Bird didn't have the picture perfect shot, but he shot it the same everytime," he said. "I think we've used the analogy over and over again [of] the golfer. Jim Furyk has the ugliest golf swing in America, but it's the same one over and over again and that's why he's good. That's why he can do it. John's in that thing. He's got to make it the same shot. He can't take two different shots. Catch and he doesn't jump. Off the dribble he jumps. It's got to the same, repetition."

But much more than Wall's jumper, Wittman seemed pleased with how Wall has run the offense in recent games, specifically with the pace he's played at.

"I told him these last two games were as good as he's done in terms of keeping us in a pace that we have to play at for 48 minutes," Wittman said. "I think he's seeing that. There was very few times, other than he got tired a little bit at the end of that third quarter where he kind of walked it up, but other than that, these last two games, I told him ‘Take these home and study these, and this is the way from a pace standpoint we have to play on offense.' I thought he played with great confidence."

Wizards vs Hornets: John Wall explodes for 29 points in 96-87 victory