You never know which Milwaukee Bucks team you're going to get on a given night. Will the Good Bucks show up when they take on the Wizards at the Verizon Center?

Anyone remember what it was like to root for the Gilbert Arenas-era Wizards? The highs were high, the lows were low, and while the rollercoaster ride was often fun, it added up to a pretty average team. (One most of us would take over the Wizards of the last few years, I'm sure, but still).

So, your guess about which Bucks team shows up for tonight's game at the Verizon Center is as good as mine.

Where and when? The Wizards and Bucks will play at 7 p.m. EST. The game will be back on the regular CSN channel. All Hail High Definition!

Are they good? On the whole, this is an average team. A frustrating average team, to be sure, but they're deep with options to worry about on both ends of the floor. They've also been very good since acquiring J.J. Redick from Orlando at the trade deadline, going 6-3 with wins at Golden State, Houston and at home against Utah.

From the other side. 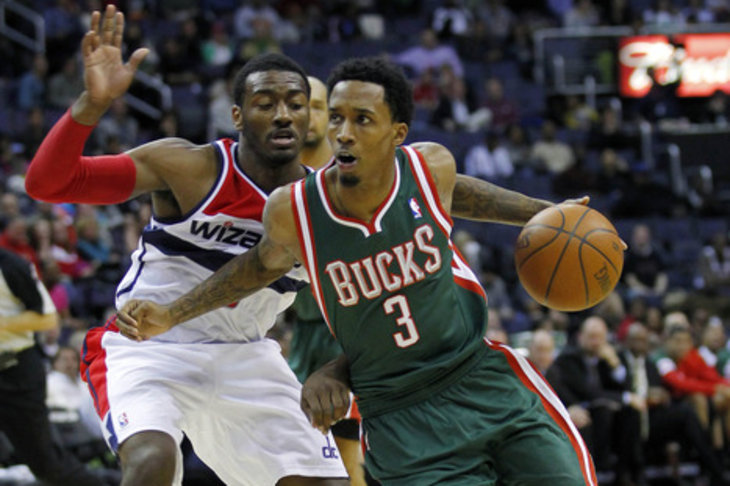 Who's out? I'd bet against Bradley Beal playing, though it's possible he woke up and found his injured ankle felt good today. It also looks like Trevor Ariza won't play after hurting his knee against Cleveland. The Bucks are relatively healthy, though a turf toe injury could keep Luc Richard Mbah a Moute out of the lineup. Ersan Ilyasova also returned from a nagging knee injury Tuesday and is still getting back into the swing of things.

Why should I care? The Wizards have a chance to play spoiler. Nobody wants to be the No. 8 seed in the East, because that means a date with the Heat. Milwaukee currently sits in that spot and are 1.5 games behind Atlanta and streaking Boston for sixth/seventh. A first-round matchup against Indiana, New York or Brooklyn is much easier to stomach than a series against the league's best team.

What are they good at? This is a really deep team, so it's hard to gameplan for them. Brandon Jennings and Monta Ellis can be incredibly inefficient, but they can also get hot and sink you if you're not ready for them. Redick has given them much-needed perimeter shooting since coming over from Orlando, making Jennings that much more effective as a passer. Up front, they have a multitude of long athletes, led by Larry Sanders, who might be the league's best interior defender outside of the usual suspects. As a coach, it's hard to go into a game thinking you need to stop any one guy.

What are they bad at? The shot selection of their guards is questionable, to say the least. If you can bait Jennings and Ellis into mid-range jumpers, you can win. It's not that hard with either, but it requires discipline to not overreact to a couple makes. The percentages will eventually even out.

What will happen to Brandon Jennings this summer? This promises to be one of the more interesting restricted free agency cases in the league. Jennings hasn't done a ton to distinguish himself as a player since his rookie-season breakout, though he had been playing a lot better with Redick prior to Tuesday's rough night against Dallas. There's talent there, but it often gets wasted with poor shot selection. As all this is happening, Jennings hasn't been too shy about expressing his desire to go to a bigger market, even going so far to suggest that he wouldn't mind playing one year on the qualifying offer and peace-ing out once he becomes an unrestricted free agent.

That puts the Bucks in an interesting spot. They'd have cap room if they just let Jennings walked, but they're also based in Milwaukee, so good luck attracting a decent free agent with that space. Despite his shortcomings, Jennings is the closest thing the franchise has to a marquee player. Would it make sense to match any offer for Jennings? Should they still let him go? Should they trade him? Considering the distinct possibility that Ellis and Redick will also be free agents (the former would need to opt out of his $11 million salary for next year) and the prospect of Sanders' extension on the horizon (he was in Wall's draft class), the Bucks may have to make some tough decisions this summer.

Prediction: The Bucks' Jekyll and Hyde act makes this interesting, but they ultimately have enough to win down the stretch.

Where can I read more about the Bucks? Brew Hoop is excellent.

How do you think tonight's game will play out?