The Washington Wizards travel to Cleveland to take on the short-handed Cavaliers. Here's everything you need to know about tonight's game.

The Washington Wizards are coming off of a victory over the Charlotte Bobcats that was as close to a gimme as it gets. Thanks to an injury to Cavaliers all-star point guard Kyrie Irving, Washington will get another chance to beat up on a short-handed team as they head to Cleveland.

Where and when? Tip off is at 7 p.m. in Cleveland. The game will be broadcasted on CSN+.

Are they good? No, but they will be. Cleveland has three excellent young players in Irving, Dion Waiters and Tristan Thompson and, when their young core matures, they could be a very solid team. That said, they're still a few years away from their primes and Cleveland has struggled this year.

Who's out? As mentioned, the Cavaliers will be without Irving, as well as Anderson Varejao. Washington will probably be missing Bradley Beal and The Ghost of Leandro Barbosa.

Why should I care? Dude, it's the Cavs. If you've watched the Wizars at all in the last 10 years, you're probably well aware that Cleveland is the closest thing to a rival that Washington has. They can also be fun to watch, especially the freakishly-athletic Thompson.

What are they good at? Without Irving, not much. Cleveland has the NBA's 15th-most efficient offense, but that's largely thanks to Irving's brilliance as a scorer and playmaker. The one ray of hope for the Cavs is that Irving, contrary to popular belief, isn't a pure point guard who regularly looks to set up his teammates. Cleveland has a couple of guys who can make shots and Waiters is a decent playmaker, especially for a rookie off guard. They should still be able to put up some points, just not as many as normal.

What are they bad at? Defense. As is common with young teams with loads of athleticism, Cleveland forces a lot of turnovers but really struggles on the defensive glass (27th in DRB%), making shots (29th in EFG%), not fouling opposing shooters (26th in opponent free throw attempts per field goal attempt) and defending the three-point line (26th in opponent 3PT%). The reason? They gamble too much. Cleveland picks up steals and offensive boards by the bushel, especially when Thompson and Waiters are on the floor, but this tends to come at the expense of staying with their man and boxing out. 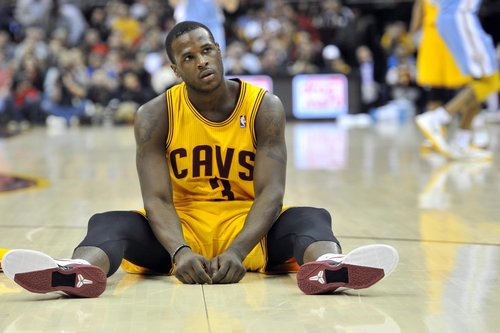 What's going to happen with Dion Waiters? Waiters has gotten a lot of press and has been labeled a future star. While he's got NBA athleticism and a decent jumper, he's far from a finished product and prefers to have the ball in his hands. He's closer to Tyreke Evans than a more traditional shooting guard like Beal, but considering Irving's ability to play off the ball and relative lack of court vision, they should eventually balance each other out very well. Waiters had a big February and is starting to develop that chemistry with Irving.

Prediction: Washington wins. As up and down as the Wizards have been lately, they're better than the Cavs team that will take the floor tonight. Look for Nene to have a big night, as none of the Cavalier big men are strong enough to deal with him in the paint.

Where can I read more about the Cavaliers? Check out Fear the Sword.

How do you think tonight's game will play out? Sound off below with your comments and predictions.