Welcome back to the rotation, Chris Singleton

After being glued to the bench for most of January, Chris Singleton has been a solid contributor to the Wizards' rotation in the last three games.

Share All sharing options for: Welcome back to the rotation, Chris Singleton

WASHINGTON -- Chris Singleton has been through an interesting trip since he was drafted by the Wizards in 2011. The first-round pick was valued so highly by the Wizards (and other teams) that the front office was contemplating taking him with their 6th pick instead of the 18th--just because he was touted as that good of a defender.

After he, Jan Vesely, and Shelvin Mack were added to the roster, these rookies were rudderless--the lockout rendered them unable to communicate with the team and and their coaches. Without a way to get oriented to the team, all they could do was wait for the season to start.

When the season finally did start, Singleton was thrust into the lineup as the starting small forward. While no one would call his performance stellar, it was certainly passable from the standpoint of a young, rebuilding team (especially one so young that its locked-out players barely had time to get to know one another).

The 2012-2013 season was going to be different, though. Singleton learned things in the offseason and tried to parlay the dual forward skills he harnessed at Florida State into a more versatile role for the team. Through summer league, the preaseason, and the early part of the regular season, Singleton played a Stretch-4 role. After all, with Ariza and Webster splitting duties so well at the 3, there wasn't much room for him there. But with a thinner rotation to start the year, Singleton had his chance to shine.

Except he didn't. His defense improved (as did the the rest of the team's), but his minutes started to dwindle throughout the November and December until finally he was out of the rotation. From December 22 through last Friday's game at Memphis, Singleton barely saw any action -- 30 total minutes, to be exact, and 15 of which were in an eight-point loss to the Pacers. Needless to say, January was probably a pretty rough month for him.

"He worked hard, put his head down and worked through it," said Randy Wittman of Singleton. "That's what all of our guys have to do. Guys that might not be playing that had been playing, they've got to fight through it. Work through it. He did that."

And something happened against the Spurs. Wittman decided, based on matchups and time-served (probably), Singleton was ready to go

Singleton has been a tremendous addition to the rotation the past three games. He has played just about 20 minutes per game, and he's shooting nearly 70% from the field. 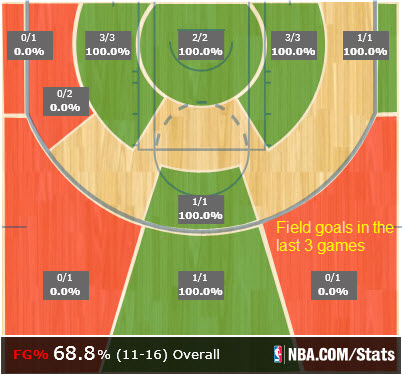 A lot of the recent success of the team is directly attributable to John Wall, and Singleton's success is no different. Of the eleven shots Singleton has made in these past three games, seven of them have been assisted, and four of those assists have been by Wall (Ariza, Webster, and Price assisted the others).

After the game last night, Singleton praised Wall's ability to give him open looks:

"John was creating. Was able to put my man in the help position. When he'd close out, I'd attack."

When defenses collapse on Wall, it opens up the floor for everyone else. That, in turn, makes things easier offensively for others -- especially Singleton. 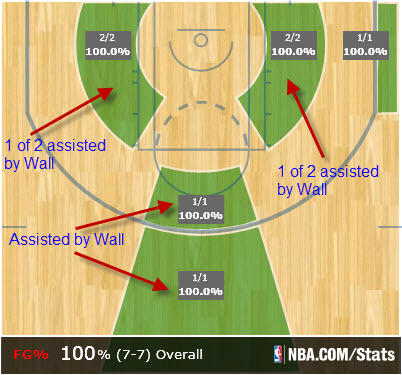 Against the Knicks last night, defense was more the key than offense. Singleton said the emphasis was to "run them off the [3-point] line a bit to settle for 2-pointers." Singleton was also incredulous at the number of 3-pointers the Knicks had been averaging in the few games prior to Wednesday's. "Forty-two? That's crazy," said Singleton.

The crazier part, though wasn't that the Wizards held them to fourteen 3-pointers below that mark, it was that Singleton knew the number was forty-two. At Tuesday's practice, in the pre-game presser, and in the post-game presser, "42 3-pointers" was a Wittman talking point staple. The fact that Chris remembered it, knew the game plan was to prevent it, and executed the game plan shows how much he has grown mentally as a player in his time on the bench. Wittman's tough love, it seems, has worked.

"Since my time on the bench, everyone's trying to keep me up," Singleton said after last night's win. "Just working with everyone, worked with the coaches and stuff on everything I needed to work on and just wait for the moment."

When asked if he thinks he's getting more confident with more playing time: "Definitely."

It's just a matter of holding on to that spot in the rotation.