How John Wall sealed the Wizards' win over the Knicks

With one minute and 50 seconds left, the Wizards clung to a six-point lead against the Knicks. But instead of folding late, the Wizards hit the game-sealing three, and they have John Wall to thank for it.

Share All sharing options for: How John Wall sealed the Wizards' win over the Knicks

WASHINGTON -- The best play of the Washington Wizards' 106-96 win over the New York Knicks was one that John Wallset up without getting any sort of credit in the stat sheet. I wanted to take a moment to break down that play, with the help of screenshots and Wall himself discussing the play when I asked after the game.

THE SITUATION: The Wizards are up six with a minute and 50 seconds left. This is the time where running clock is paramount, and it's also the time where they have failed miserably with their execution in the past. A few wins ago, Randy Wittman noted how he wasn't thrilled with the way the Wizards failed to run the clock down while protecting a lead in a late-game situation.

On this play, though, Wall heeds instructions. Holding the ball at the top of the key, Wall waits until the shot clock hits 10.

THE PLAY: It's obvious: a Wall/Nene pick and roll. Everyone in the building knows it, including both Knicks defenders. 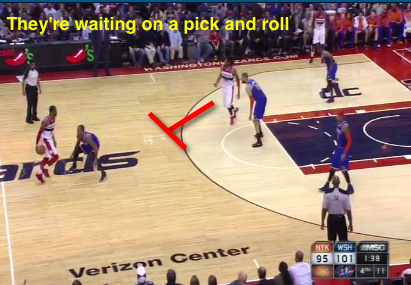 THE COVERAGE: The Knicks don't want Wall to go right, preferring instead to angle him left off where Nene is screening and force him to pull up for a jumper or make some other play on his own. Doing this allows them to take Nene out of the play. That's why you see Tyson Chandler cheat so heavily to Wall's left here. 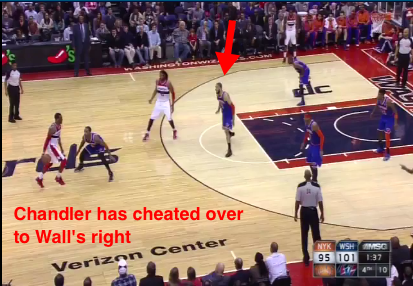 It's rare that you want a player to go into the screen, but the Knicks really don't want Wall to get a running start going right. They know how dangerous Wall is as a finisher, and more importantly, they also know how dangerous he is swinging the ball to the weakside corner shooter. They don't want to give Wall any sort of opportunity to get to his strong hand and make that pass easy.

THE ADJUSTMENT: To put it simply: Nene doesn't bother coming to set the screen. And that's by design. 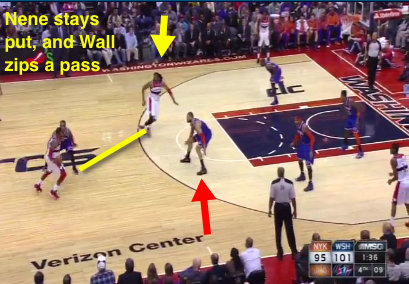 By staying put, Nene has given Wall a very obvious, but quick passing lane. If Wall hits him perfectly, Nene can create a two-on-one situation that forces Raymond Felton to decide whether to cover Nene rolling down the lane or Webster in the corner.

"Instead of me trying to force it or try to drive at it, I stopped short and found [Nene] in the pocket area," Wall says. "That made the guy from the corner collapse, and either Nene gets fouled or he finds the shooter."

THE EXECUTION: Even with all this knowledge, Wall's pass must be quick before Chandler notices the hesitation and scurries back to the left. If the timing is a split-second off, Chandler deflects the pass and the Knicks get a steal.

"It was just a matter of making sure to figure out what the right time was," Wall says.

And how did he know when the right time was? 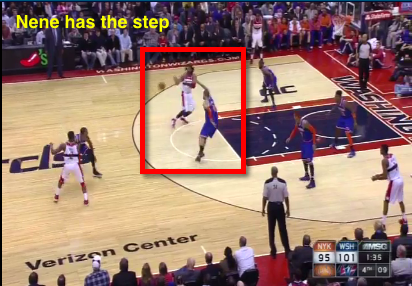 Once the eye contact was made, the bullet pass was thrown. Before Chandler knew what hit him, Nene had the step and Felton had already rotated over. From there, Nene stayed patient, drove by Felton and kicked to Webster at the exact perfect time. 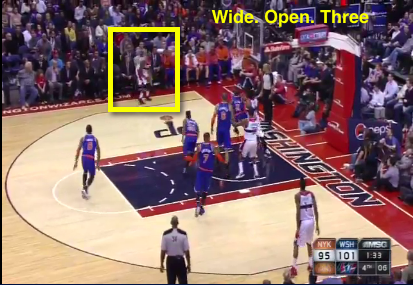 THE UNSUNG HERO: We'll discuss Wall's brilliance in a second, but this also demonstrates Nene's high basketball IQ. It was Nene that didn't come to set the screen. It was Nene that drew Felton and found Webster. Deservedly, it was Nene who got the assist.

"Bigs will trap me every time I'm coming off the pick and roll to try to get the ball out of my hands, and he does a great job of reading it," Wall says. ... "He makes the job a lot easier for me. He can read pick and rolls. He tells me when to cut. It just makes my job better."

This, of course, is a far cry from Wall's pick-and-roll partners in the past.

THE REAL HERO: But really, this was about Wall. He made the pass that led to the play. He made the read to keep Nene where he was. He made eye contact with Nene to keep him there. He won't be awarded any points, rebounds or assists in the stat sheet, but when the Wizards coaches watch tape, they'll credit Wall for making the play.

This is also why I always scoff when people say Wall lacks court vision. There's no generally-accepted definition of the term, but everyone at least has to agree that an element of court vision is understanding defensive coverages and seeing a play develop two passes before everyone else. Wall literally saw this play develop ... two passes before everyone else. Then, he executed it and allowed his team to seal a win in a late-game situation that has plagued them all year.

If that's not elite court vision, I'm not sure what is.

Wizards vs Knicks: Washington comes away with shocking 106-96 win