Whatever happened to Jordan Crawford, the 6th man of tomorrow?

Jordan Crawford has struggled since John Wall returned to action. Why has he struggled and what can he do to get back on track?

Share All sharing options for: Whatever happened to Jordan Crawford, the 6th man of tomorrow?

WASHINGTON -- Jordan Crawford is nothing if not ambitious. A relatively unheralded late first round pick out of Xavier, Crawford has always appeared to have something to prove to the world. The player scouts tagged a chucker, too small, too undisciplined and not athletic enough has made a career out of proving himself time and time again. People may have laughed when Crawford claimed to want to be better than Michael Jordan, but would you expect anything less from a player with the balls to attempt to dunk on an in-his-prime Lebron James as a teenager?

The Washington Wizards got off to an awful start this season and there were poor performances across the board. The one exception was Crawford, who appeared to relish the chance to become the team's go-to scorer. From the beginning of the season until John Wall returned to action Crawford was superb. Since then? Well, the results haven't been pretty, and even coach Randy Wittman has acknowledge that he's struggling.

All data courtesy of NBA.com/stats

Crawford has largely struggled since Wall returned, the two exceptions being a 19 point outburst against the Minnesota Timberwolves and a game-winning three-pointer against the Portland Trail Blazers. This string of bad games culminated in only five minutes of playing time against the Clippers for a player who only a month ago had appeared indispensable.

The dip in his performance is likely tied to the change in what the team needs from him. Crawford has experienced his greatest success when given lots of touches and free reign to pound the ball looking for shots. This freelancing, quantity- over-quality approach to offense makes sense when the next-best option is an Emeka Okafor post up or a Chris Singleton jumper. It doesn't, though, when players like Wall, Nene and Bradley Beal are on the floor.

Beal's emergence as an offensive weapon could also be tied to Crawford's decline. Both players have similar weaknesses defensively, especially against tall shooting guards, which usually leads to one of them taking an unfavorable matchup when they're on the court together. Furthermore, the team has made it no secret that Beal is the team's shooting guard of the future, relegating Crawford to a role as a backup and limiting the amount of playing time he can receive. In addition to altering the kinds of plays Crawford is involved in, this also has to have had at least some effect on his ego and confidence.

One player who's uniquely familiar with Crawford's struggles is his one-time teammate, Clippers guard Jamal Crawford. Jamal shares many of Jordan's strengths and weaknesses and spent much of his early career moving in and out of starting lineups before finally coming into his own as a sixth man with the Atlanta Hawks.

"[Coming off the bench] started in Atlanta full time. I understood we had a really good starting five and I didn't want us to lose much," he said.

Even though he was Atlanta's most explosive scorer, Jamal Crawford was more than willing to sacrifice if it meant winning.

"You can't have an ego. That's for sure. No egos whatsoever. You've got to work for the betterment of the team," he said.

It'd be unfair to Jordan Crawford to assume that he's become disgruntled per se due to a lesser role. That said, he's nearing free agency for the first time and it's a lot easier to get a big contract if a player has a prominent position on the team. Even if he's outwardly comfortable with fewer touches and less playing time, Crawford is facing enormous pressure to maximize his time in Washington and secure his financial future.

Jamal Crawford alluded to the pressure Jordan Crawford is under as far as his perceived value is concerned.

"When you're younger, obviously, you know you want to start to establish yourself."

He'd go on to say that believes it's only a matter of time until Jordan Crawford finds his groove again, adding, "There's always a place in the league for a scorer. He can really fill it up. He can make plays, too, I think he's an underrated passer."

What may be most frustrating about Crawford's recent performance is that he should actually be excelling right now. Crawford played his best basketball before this season with Wall on the court, is making 41%(!) of his spot up three pointers, and MySynergySports.com ranks him the NBA's 10-most efficient scorer in isolation this season. With his ability to create or finish plays, Crawford should mesh almost as well with Wall as Beal does.

Crawford needs to get back on track, and he needs to do it soon. Once Beal returns, he'll likely see a further diminished role in Washington's offense. With his poor defense, there's very little cause to play him if he's not hitting shots and making the game easier for his teammates. Warming the bench in favor of Garrett Temple could become routine.

Fortunately, it's still possible that he can turn things around. There's very little rhyme or reason to Crawford's shot chart, yet he's clearly far more effective from beyond the arc on the right side of the court. While he's made about 40 percent of his two pointers on both sides of the floor, he's making a scorching 46 percent of his above the break three pointers from the right side of the court versus 26 percent from the left side. 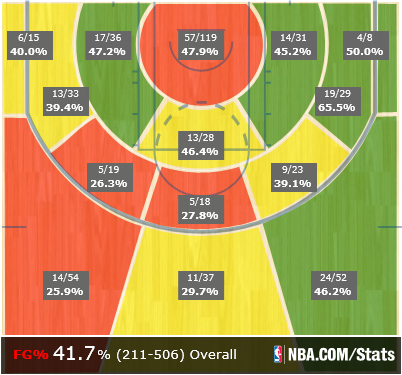 Data and graphic courtesy of NBA.com/stats

Washington could also make things easier on Crawford by simplifying his role. He's appeared to have trouble balancing his need to fit within a team concept with his natural inclinations as a scorer, so going back to square one and giving him free reign to run simple pick and rolls and isolations with the second unit could get help him find his rhythm again. As counter-intuitive as it may sound, by becoming even more aggressive, Crawford could actually do more good than harm.

Jordan Crawford won't be in a funk forever. Just as he's not as good as he seemed at the beginning of the season, he's not as bad as he's been the last few weeks. The million dollar question when it comes to Crawford is whether or not he can find some semblance of balance and consistency the way so many of the NBA's elite sixth men have. If he can, Washington will have a dangerous supersub who can fill either backcourt position.
If not? Well, there's always a place in this league for a scorer.