Pistons vs. Wizards: Randy Wittman calls out his team

Randy Wittman was sharply critical of his team following their loss to the Detroit Pistons. Also, other players respond to John Wall's struggles.

Share All sharing options for: Pistons vs. Wizards: Randy Wittman calls out his team

WASHINGTON -- Minutes before John Wall's terse postgame interview, Randy Wittman made a statement of his own, suggesting that several of his players did not accept coaching throughout the game.

"Tonight, we got what we deserved. We didn't deserve to win that game," Wittman said.

"We were more caught up in ourselves as individuals than the team," he added later. "That's the bottom line. We got guys that haven't been in the rotation complaining. The older guys try to help them; they won't listen. That just tells me, 'I'm just worried about myself. I'm not worried about winning this game.'" 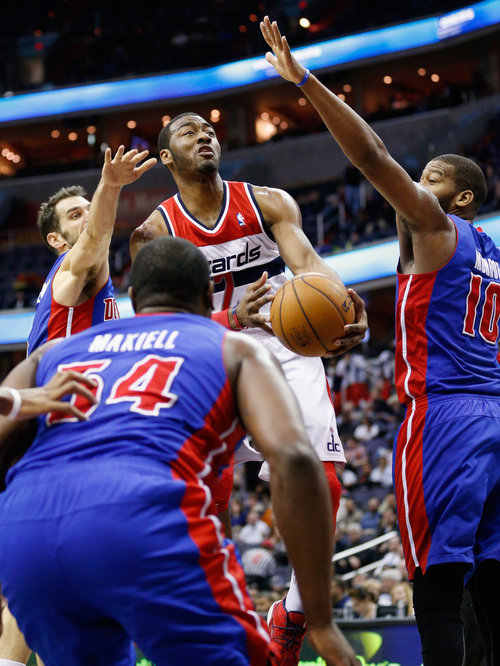 A summary of the Wizards' loss to Detroit.

"It wasn't about the team tonight," Wittman concluded before walking out. "That's what's disappointing."

I guess it's up to you to read into whether he was talking about Wall. Bradley Beal and Martell Webster, among others, agreed with their head coach about his general critique.

"He's right. We just have to be on the same page. We just have to realize it's not about me, me me, it's about we. We didn't show that tonight," Beal said. "Our body language tells it all. We just have to be men about it and accept the fact that someone else is playing good. Every night is not going to be your night, but there's other ways you can impact the game. We just got to stick with it."

"We got caught up in the emotions," Webster said. "Me, myself, I kind of got caught up in the game a little bit. As a veteran on this team, I have to do a better job of making sure, as a team and a unit, that we manage those and don't let them get the best of us. I was a victim of it."

Several players were asked about Wall himself. Here were their answers:

Beal: "When he's in a zone, he's hard to get to sometimes. But that's just the type of player he is. I'm kind of like that. I get frustrated and upset. You probably won't hear from me about it, but it's a learning process for him. It's a learning process for me and everyone else. Sometimes, the older guys don't have good games and we tell them to stick with it. They'll either listen or not. It's up to the player. You can tell him, but you can't make him, so to speak."

A.J. Price: "I'm not sure what it is right now. I don't think he's playing that type of bad, as bad as he thinks he's playing, but he's just got to stay with it. It's up to us as teammates to bring him with us, keep him up and stay confident."

"Being young and having that pressure, it can get to you sometimes." -Martell Webster on John Wall

Webster: "As a young player -- and I went through it too -- you've got to live in the moment. Once that moment's over, you've got to move on. As a young team, you shouldn't hold grudges. That's just every player's mentality. There's a lot of pride in this game, especially with the pressures of a point guard and a high-level point guard like John. Being young and having that pressure, it can get to you sometimes. Like I said, it's never going to be a perfect night. It's never going to be a perfect night. You're going to go through some bad stretches. It's how you manage those bad stretches and realizing that it's not about yourself, it's about the team, you can usually get over the hump. He's just got to keep chipping away. We all do. We're all victims of it. It happens."

All in all, a rough night in D.C. Thoughts on these comments?