Share All sharing options for: Jordan Crawford tosses jersey into crowd after Wizards lose to Raptors

WASHINGTON -- If you were hoping that Jordan Crawford was taking his benching well, the events at the end of the Wizards' 96-88 loss to the Toronto Raptors may convince you otherwise. The Wizards' guard spent most of the game lounging on the bench, and then he tossed his jersey into the crowd after the final buzzer. This picture, via Truth About It, is of the fan that caught Crawford's jersey. 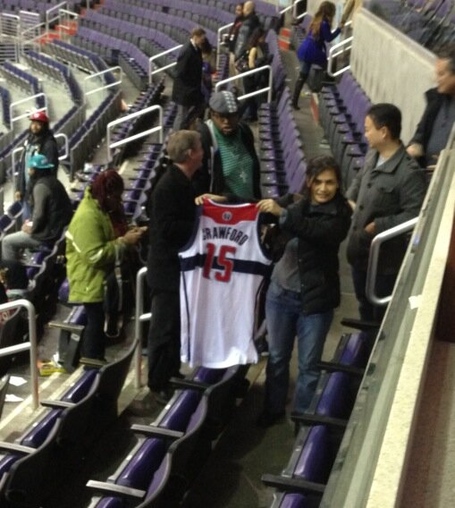 Crawford wasn't around to talk after the game, and Wittman claimed ignorance when asked about the incident.

Crawford's name has obviously been mentioned in many trade rumors over the past week as his playing time has vanished. Besides that above quote, Wittman has stayed consistent in his message that Crawford needs to work out of his struggles like Chris Singleton and others have.

Wizards vs Raptors: John Wall is ice-cold as Wizards fall to Raptors