Washington continued its season-long defensive onslaught of other teams in a 15-point drubbing of Brooklyn on Friday night. How good has the Wizards' defense been recently? We take a look at the numbers.

WASHINGTON -- I'm not sure if you know this, but the Wizards were kind of bad offensively without John Wall. Just kidding. I know you knew that.

Their offense still ranks 30th in the league; they dug themselves in so deep a hole that they still haven't climbed all the way out yet. But Wall being back on the squad has definitely helped the Wizards pick up their offense. Their sound defeat of the Brooklyn Nets on Friday night was a testament to how well-oiled their offense has become. They took down a team with seasoned vets, former and current All-Stars, and a big-market ego by 15 points. Wall has been back on the team for 16 games, and in those games (a record of 9-7) the Wizards rank 24th in the league in offense. Not stellar, but not the cellar. That's not exactly a motto I'd tattoo on myself anytime soon, but not being last is refreshing.

But on the flip side (and arguably, the more important side), it's also no secret that the Wizards have been a good defensive team all season.

As odd as that sentence may sound to any long-term fans of the team, it's 100 percent true. Randy Wittman's squad has played fantastic defense, and it's a tribute to their sets and their collective mental commitment that they've played so well on that side of the ball.

"It's just a matter of five guys being connected, and we're connected right now," Wittman said on Friday. "We're covering for each other and that's the main thing. We've got five guys that are committed defensively. Are you gonna make mistakes? Yeah. But I like our mistakes now because they're aggressive."

It's true the Wizards have been making mistakes on the defensive end. After all, they've lost seven games since Wall's been back. But Wittman might actually be overplaying the mistakes they're making. Since Wall has returned, Washington has the best defensive rating of all teams in the league, per NBA.com's stats page. I will repeat that because I believe it's a fact that bears repeating.

In the past 16 games, the Washington Wizards are in sole possession of the top defensive rating in the NBA: 95.1 points allowed per 100 possessions.

Everyone assumed that the Wizards would get better offensively when Wall returned, but I don't think anyone thought they'd improve even more on defense. Wall himself can be a great defender when he wants to be (which isn't as often as it should be), but perhaps it is his offense that's helping improve their defense as well. Wall brings a transition game that was non-existent 17 games ago, he can score at the basket and he can find the open man after a help defender has moved out of position. All of these things free up the energy the rest of the players use on the offensive end.

The result, as we saw against Brooklyn on Friday night, was everyone turning the screw just a little bit tighter on defense and making the Nets' night a living hell. Brooklyn's second quarter on Friday night wasn't quite as bad as another poor performance this season, but the Wizards held them to 11 points. Oh, and they went 0-12 on their first 12 shots. 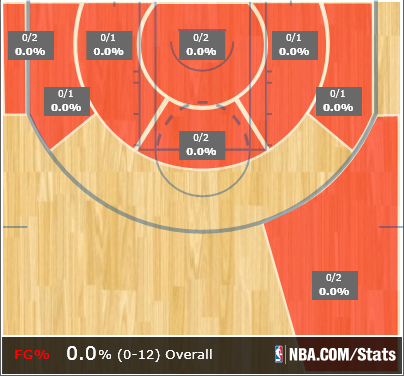 "That's one of the things we key on in practice," Wall said of the Wizards' defense. "We don't really worry about the offense. We've got guys here who can score and get easy shots. The main thing to be good in this league, especially as a young team, is to play hard and that's what we try to do every night. We create offense off of our defense."

To that point, Washington scored 19 points off 15 Brooklyn turnovers and had 16 points in transition.

The Wizards held Brooklyn to a season low 32.9 percent shooting percentage in the game. Much of that was the result of Nene and Okafor's stellar play against All-Star Brook Lopez in the paint (Lopez was 3-11 on the night), but we can't undersell the value of Chris Singleton's defense on Reggie Evans and Andray Blatche, or Martell Webster and Trevor Ariza's defense on Gerald Wallace.

When asked after the game about his team's lackluster performance, Nets coach P.J. Carlesimo said, "I'm sure Washington's defense had something to do with it." 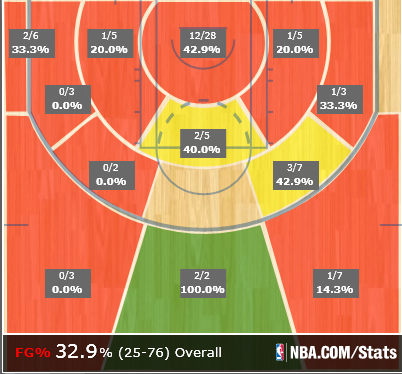