The headline following Monday's 98-80 win over the Orlando Magic was that the Washington Wizards made it to .500 for the first time in four years, but the bench's second-half performance was a key subplot.

We got into this a bit during yesterday's recap, and it is certainly too small a sample size to draw any meaningful conclusions, but the Washington Wizards' bench for the first time this season looked like a unit that could protect a big lead Monday en route to an easy 98-80 win over the Orlando Magic.

Chris Singleton, in particular, looked like a player who could quickly establish himself as Washington's key reserve as long as Al Harrington remains out with injury. While Jan Vesely brings rebounding and defensive energy to the floor, his standing as the first guy off the bench the last couple weeks has been mostly due to the utter lack of decent options Randy Wittman has to choose from.

In Singleton, Wittman has a player similar to Vesely in that he can rebound and defend, but different in that he at least brings something to the offensive end (the ability to hit a spot up jumper). Hopefully Singleton builds on his 11-point, six-rebound showing against the Magic and, along with Vesely, gives the Wizards two semi-reliable options that can come in an reduce Nene's minutes load.

Of course, with the return of Otto Porter seemingly imminent, and Harrington presumably on the mend, Washington's real problem on the bench is finding an adequate sub for John Wall. Eric Maynor has been nothing short of a disaster so far, and the offense completely falls apart whenever Wall has to come off the floor for a quick breather. Garrett Temple is the only other reserve capable of playing point guard, so it might be wise at some point for Washington to trade one of its young reserve big men for a legit backup point guard.

6 - Wizards with five or more rebounds against the Magic. Orlando entered last night's game ranked fourth in the NBA in defensive rebounding percentage, but Washington outrebounded the Magic 42-40 overall, and 35-31 on the defensive glass. Holding the Magic to 39 percent shooting obviously helps, but the Wizards also made a concerted team effort to rebound the basketball. No one had even seven rebounds, which is normally a bad sign, but not when you have three players grab six boards (Nene, Ariza and Chris Singleton), three haul in five (Marcin Gortat, Jan Vesely and Trevor Booker), and two more collect four (Wall and Martell Webster).

Wiz, of course, hit .500 tonight. Gotta re-check the rules, but I think that gets you a first-round bye and two-dozen cookies in the East. 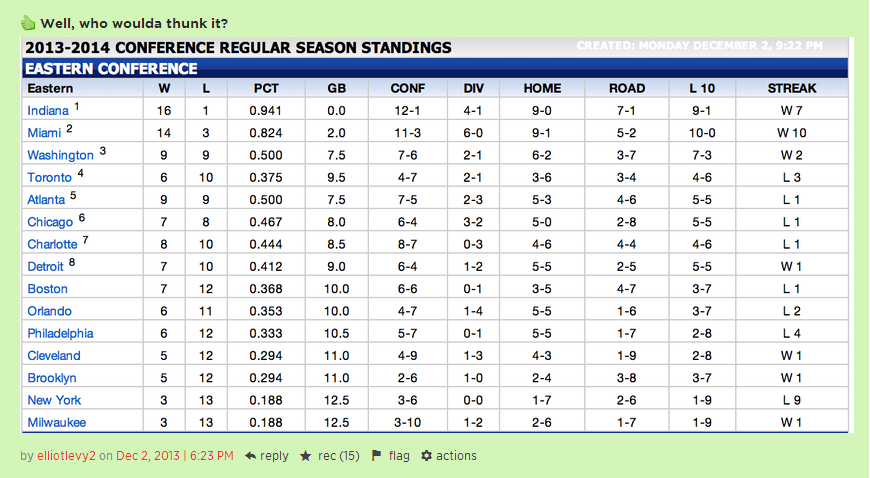 This was technically a comment on our recap, but it was too glorious to not include in Pixels. 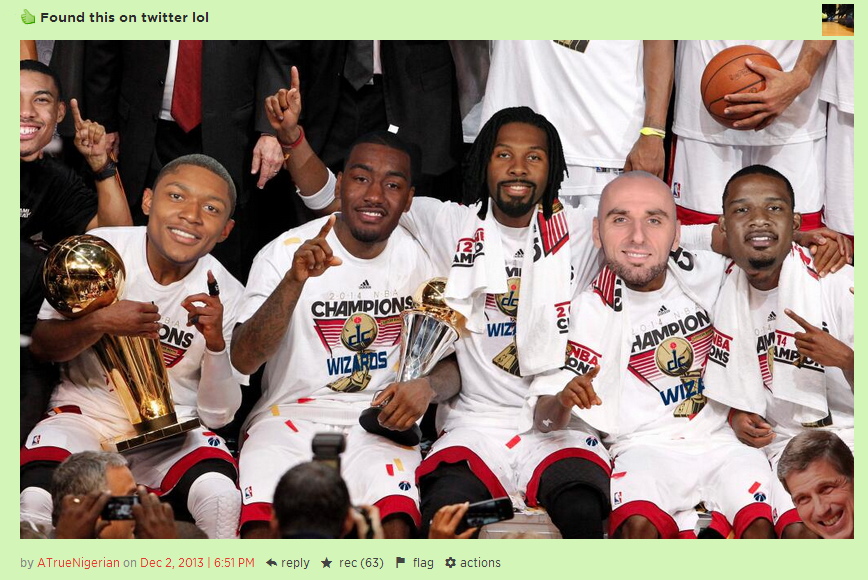