'We are not satisfied': For the winning Wizards, this is only the beginning

While fans are right to celebrate the Wizards' wins milestone, the players know that this is only the beginning.

Share All sharing options for: 'We are not satisfied': For the winning Wizards, this is only the beginning

WASHINGTON - You've probably heard this a hundred times by now, but it's worth repeating: the Washington Wizards have a .500 record for the first time since November 2009.

How does John Wall feel about it?

"It sounds great to finally have a so called ‘winning record' the first time since being here. We are playing basketball the right way," he said after Monday's 98-80 win over the Orlando Magic.

To say there's been a lot of turnover since the last time the Wizards were at .500 or above is an understatement. In just those four short years, the team has withstood an ownership change, a coaching change, a fully roster overhaul, and a teensy-weensy locker room incident that involved... well, you know.

And for a lot of that time, it has felt like this team has dragged its fan base through Hell and back over and over again. But for some reason, this milestone of merely winning as many games in a season as one has losses feels like something more. 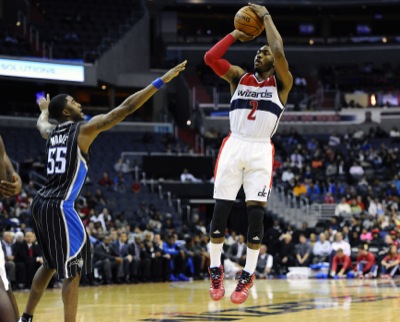 Well, if you look at it a few different ways, it is something more.

The Wizards have won five in a row at home, and are 6-2 at home on the year. The energy inside the Verizon Center is different. Where in the past, Wizards fans were outnumbered by carpetbagging Lakers and Knicks fans overrunning the arena, Wizards fans have begun expelling powerful air from their own lungs and making the Verizon Center their own. Go ahead and try to start a "Let's Go Knicks" chant in the third quarter; you'll get booed right out of Chinatown. Cheering for Purple and Gold at the free throw line? How about booing so loudly that the fourth quarter closers almost have to scrounge up a second chicken sandwich for everyone in the crowd? Home turf is now is safely home turf.

As much as Randy Wittman may want to slide some of last season's wins into this season -- he quipped as much when the 34-34 record was brought up to him -- there is a difference in this team even from just last year. Martell Webster sees this difference in how the team has managed to handle games against seemingly inferior opponents. Whereas last year, Webster admits, the team would find itself playing "down to the level of competition," this year the Wizards have "picked up the speed" at the start of the first and third quarters in order to "set the tempo" in favor of their own style of play.

After coming into the beginning of last season disappointed with the early loss of John Wall, the team seemed determined not to let that mentality wash over them again.

"We believed at the start of [this] year that we can compete and win. And even thought it didn't go that way to start, they never gave into that," Wittman said. "They knew we could play better, individually and as a team. And then guys picked it up and began playing better. And our team became better. And we are where we are... I like where we are from their psyche and their concentration."

Over the final 50 games of the 2012-13 season, the Wizards were .500. So, for the last 68 games, they are a .500 team. Many of those games were without Nene and Bradley Beal. Only one of those games, the first one, was without Wall. Every single one of those games had Wittman at the helm. The coach, not one to rain praise on himself, acknowledged after the game that the mental toughness of this team has "come a long way."

"[T]hey came out and they were bound and determined to win this game, start to finish," he said.

"[Winning] is something that we knew that we could do. We are not satisfied again. We want to continue this winning thing, make it a tradition around here, and go forward from there."

We are not satisfied again. We want to continue this winning thing. -Trevor Ariza

The Wizards have also improved their ability to close out games, keeping opponents at arm's length after being ahead for the whole game or after surrendering a partial comeback is something that tests a team's mettle. If the Wizards continue to play their "own style of basketball -- basketball we like, basketball that we work on every day," as Ariza put it, then the composure we didn't see last season will continue to fall away to the strong closeouts we've seen so far this year.

For Webster, one thing last year's games lacked as they moved down the stretch? "A sense of urgency." Webster noted that Wittman often encourages the team to remember that those last four minutes are "crunch time."

"You almost have to have a playoff mentality there," Webster said. "Crunch time: execution is key, getting stops is key, and for us that's been the big difference."

Crunch time: execution is key, getting stops is key, and for us that's been the big difference. -Martell Webster

"A playoff mentality." We'd have to go back to 2008 to remember exactly what that was like. It is quite the change from rosters of the last few years.

It's funny how happy the fan base was to get to this .500 milestone. But Ariza and the rest are right to not be satisfied and let the mentality they've built plateau here.