In his fourth year in the league, John Wall is emerging as a high impact defender. What is he doing differently this season? We break it down here.

Share All sharing options for: Breaking down John Wall's improvements on defense

The Wizards, a team that relies entirely too much on the oft-injured Nene, that lost their defensive anchor from a year ago and shuffle through their big man rotation on almost a nightly basis, surprisingly rank 13th in the NBA in defensive efficiency. They're a middle-of-the-pack team when it comes to defending the three, a mediocre rebounding team and really don't feature a great rim protector down low.

And yet, here they are, 13th in defensive efficiency. They have adjusted to life without Emeka Okafor, and done so while propping up John Wall as their multifaceted lead guard. He's mastering the art of playing the free safety role, whether it's using his speed to stunt to shooters out on the perimeter or his size to hound guards along the sidelines. He has spearheaded an above-average defense that, while not as good as last year's unit, has nevertheless been decent after undergoing a dramatic shift in identity since the start of last season.

Why the new Wizards big man is helping John Wall and others in the game's most common play.

How the Wizards' star is learning to read the defense.

The Wizards were an elite defensive unit by almost every measure last season. Led by Nene's ability to corral ball handlers on pick and rolls and Okafor's mastery in cutting off dribble penetration and protecting the rim, ball hawks like Wall and Trevor Ariza were more than happy to sit back and play passing lanes. They finished third in defending isolations last year, held spot-up shooters to just 38 percent shooting (good for fourth in the league) and were the sixth-best team defending the roll man in pick and rolls, per MySynergySports.com. The defensive rotations were immaculate, and players not named Wall or Ariza rarely took themselves out of plays with lapses in judgment.

But the luxury of Okafor and a healthier Nene isn't there now. To account for the defensive dropoff between Okafor and Marcin Gortat, the Wizards have had to work harder to get stops. If there was one slip-up in the Wizards defense last season, it was in their inability to contest jumpers out of the pick and roll when they dropped back their big men. Some of it is by design -- you want to bait the offense into taking as many midrange jumpers as humanly possible -- but you still want to get a hand up.

Wall emerged at the crux of this issue. He repeatedly slammed into screeners, effectively taking himself out of the play and ultimately giving ball handlers wide-open looks at the basket. He rarely positioned himself to avoid taking these hits and would often attempt to slide laterally with the ball handler in an attempt to trail as closely as possible. The problem is that's exactly what screeners want him to do, and there's no way of him fighting over the top of a player twice his size. 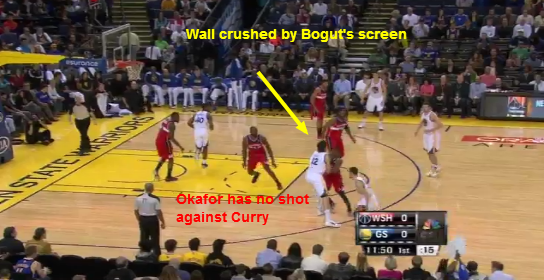 This season, Wall has taken on a more pragmatic approach to attacking these plays. He's seeing the floor better and is reacting to the screen before the ball handler is able to make his move, as he does here in overtime against the Bucks.

Gortat, who has struggled mightily this season defending in space, drops back on the pick and roll. His duty is to contain Brandon Knight's dribble penetration and not a lick more than that. He wants to stay as close to the painted area as possible, if nothing more than to defend Henson's roll to the rim. Wall makes his job a lot easier by stepping up before Knight accepts the pick.

Knight has no shot at getting off a clean look with Wall's speed and length. More importantly, Wall kept his big man from having to engage the ball handler along the perimeter.

Clearly the Wizards miss the presence of Okafor down low, and Nene missing seven games hasn't helped either. But Wall's improvement fighting over screens and funneling ball handlers into help along the sidelines has led to improvements in the Wizards pick and roll coverage regardless. They currently rank sixth in the league in defending ball handlers in pick and rolls, while Wall himself ranks 23rd among all players, giving up just 34.5 percent shooting, per MySynergySports.com.

The other major revelation this season: Wittman has unleashed Wall as a free safety within the realm of his defense. They're switching more on the perimeter, for better or worse, empowering Wall to freelance and make plays on other offensive players. For example:

The Wizards have also implemented ICE on side pick and rolls more often this year in an effort to keep ball handlers from getting to the middle. This requires the point guard to shade the ball handler toward the sideline by positioning himself between his man and the screener. The big man guarding the screener will either pop out on the other side and trap the ball handler or will drop back and force the offense into a midrange jumper.

In this case, Jan Vesely is the big man guarding the screener. With Tony Parker dribbling to his left, Vesely knows he has to cut off the baseline while Wall comes in over the top to trap him.

The other Wizards defenders have gotten better in scramble situations, knowing who to rotate over to and who to leave alone. In this screenshot, Ariza and Bradley Beal position themselves well.

Given that Wall is asked to push the ball every chance he gets and carries a huge offensive burden, it's promising to see him make these strides on defense. For years, we have wondered what a physical freak like Wall can become once he learns the nuances of NBA offenses and defenses, and we're beginning to see the fruits of his labor. He's holding his counterparts to a 15.6 player efficiency rating per-48 minutes according to 82games.com, and is no longer getting beat so frequently off the dribble.

There is still work to be done, particularly in transition, but progress is being made. He still lets his man go backdoor too easily, and he does make his fair share of mistakes. But the key is to minimize those errors and hope that the positives outweigh the negatives.

It's asking a lot from Wall to be a shutdown defender along the lines of Tony Allen. He's not a specialist, and will likely never be one. But progress is definitely being made.