Nene's impact and Nene's health: A constant source of conflict

Share All sharing options for: Nene's impact and Nene's health: A constant source of conflict

BROOKLYN - Deep within the vibrations of a gregarious locker room thrilled with a tough road victory, one quiet man stood out. The jersey was still on, and the feet were soaked in a bucket of ice. They sat there for a while, before the big man tried to shift positions. A grimace followed, then a quick exploration of the sore Achilles tendon that is the latest of a laundry list of ailments. And finally, when the routine was over, the jersey was taken off and the slow limp to the shower commenced.

This is a daily routine for Nene at this point. Now, it's the Achilles. Before, it was the left foot, or the knee. Who can really keep track anymore?

Nene did not speak to reporters following the Wizards' 113-107 win over the Nets, but he didn't need to. On the court, his 17 points, three rebounds and countless untracked plays in 23 minutes helped lift Washington to a critical road win. Off the court, the ice-and-limp routine provided a window into the Wizards' dilemma. They need Nene so badly, but will they ever get a healthy version of him for a consistent amount of time?

Jeff Newman gives the Big Brazilian a nod in his postgame wrap-up feature.

Late surge not enough for Nets

Nets Daily's recap of the game.

Nene's answers to Zach Lowe on this topic mirror many of the answers he's given this season at other points. He knows he's injury-prone and tries the best he can to prevent those injuries, but seems to accept that it's not always enough. He reads like a man who externally shrugs off the pain while being consumed by it internally.

It's frustrating to the point where many wonder if Nene is exaggerating his pain. The players that see him go through that same monotonous procedure every day, though, dismiss this idea.

"You don't know what kind of pain he's in, how he's feeling, so who are you to judge him?" Bradley Beal said when presented with the perception that Nene nurses injuries. "We never do that in this locker room."

Athletes almost never question a teammate's pain threshold. It's a sacred ground. But it's especially sacred in this case because the Wizards know how much they need Nene to succeed. Since acquiring him from the Nuggets, the Wizards are 7-34 in games he doesn't play. With him, they can smell a decent playoff seed. Without him, they're a high lottery team.

Watch closely, and you see the many ways he helps, particularly the ones that are mostly undetectable. For example, this ad-libbed backscreen to free Trevor Ariza for a three. 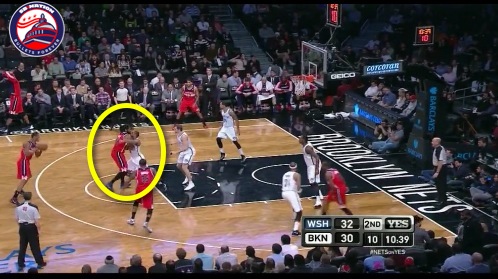 Or, this quick pointer to Ariza that the Nets are planning to set a backscreen to free his man for a top-of-the-key three. Ariza got the message, Nene stayed where he was instead of following Andray Blatche, the screener, and picked off the pass for a layup at the other end. 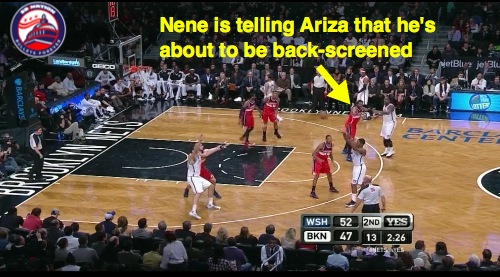 Or, this boxout on Kevin Garnett, one of several textbook ones that helped enable the Wizards' massive rebound advantage. 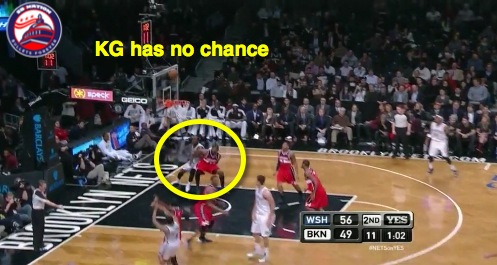 Or the three-possession sequence in the third quarter, during which Nene:

"It's everything," Randy Wittman said when asked to explain how Nene impacted this game. "How he plays. His basketball IQ. His passing ability. His ability to score when he needs to, both on the box in the paint and the 15-foot elbow jumper. The calmness to be able to throw him the ball in certain situations coming down the stretch and play off him."

Nene's effect on Seraphin in particular was easy to spot. After the game, Seraphin told me the story of a time he was dealing with a crisis of confidence last year. The minutes that had seemingly been handed to him had dwindled after he struggled on the court. Expecting a helping hand, he instead got tough love from Nene on his poor play. It was just what he needed, he said.

"He was mad at me," Seraphin said. "He was telling me, 'You are supposed to be on the court. You are the one that's supposed to be playing those minutes.' That kind of opened my eyes."

Last night, Seraphin was freed from the burden of dealing with double teams and paralysis from trying to make too many decisions, and he had one of his best games of the season. In a way, it was another teaching moment.

"I know he's always talking to those guys," Wittman said, referring to Seraphin and the team's other young big men. "When you don't have that, you feel a little lonely if he's not out there."

Wizards vs. Nets: Washington hangs on to get a New York sweep