Magical Pixels, Wizards vs. Knicks: Bradley Beal is awesome as ever

Bradley Beal returned against the New York Knicks, scored 14 fourth-quarter points and made the game-winning layup with 6.9 seconds to play. I wonder what the focus of today's Pixels might be...

Share All sharing options for: Magical Pixels, Wizards vs. Knicks: Bradley Beal is awesome as ever

Man, that was awesome. The Washington Wizards didn't play great last night, almost blowing a game they had in hand against a New York Knicks team that was ice cold from the field and down to it's third-string point guard.

But Bradley Beal, back after three weeks spent sidelined with a stress injury to his fibula, caught fire at the right time and scored 14 fourth-quarter points, including the game-winning layup with 6.9 seconds to play, in leading the Wizards to a 102-101 victory, their first at Madison Square Garden since 2006.

So good to have Beal back. But enough from me, let's get right into the Pixels.

Watch Beal's game winner over and over.

You know you want to hear Dave Johnson and Glenn Consor's calls of Beal's game-winner and his big-cojones three that tied the score at 100.

Last game, we marveled at Chris Paul's True Shooting Percentage of 1.008 against the Wizards. Yesterday, Martell Webster scored 30 points on 13 shots, good for a TS% of .933, which isn't quite as good as CP3's, but still pretty darn impressive.

14 - Points scored by Beal in the fourth quarter against the Knicks, including the game-winning layup. NBD.

Bradley Beal had no idea the Knicks left 3 TOs on the table. "Did the really. Hooly." Later: "That probably could have changed a few things"

Can’t really put into words Beal’s expression there. He shrugged for a good five seconds, like a kid who found out Santa doesn’t exist.

Marcin Gortat on Beal’s layup. "I don’t know what [the Knicks] were trying to do. They screwed up."

If Mike Woodson is still the coach tomorrow, we can assume he walked in on James Dolan dry-humping a wall socket with cocaine on his face.

@andrewsharp You're welcome to live in our guest house. We play video games every night & talk about funny movie lines I know.

At some point during the first half of last night's game, New York Daily News basketball writer Frank Isola had this to say on Twitter.

And John Wall cannot possibly play with any less intensity can he?

Wizards bloggers took note of Isola's tweet. Unfortunately for Isola, they also took note that Wall was on his way to 19 first-half points, along with five assists and four rebounds.

One of the many side effects rooting on a perpetually flailing franchise is that it turns you into a cold, cynical, arcastic, snarky smartass. This applies doubly (triply??) for bloggers, who only know one way to deal with an internet troll: Troll back, only harder. Thus, you can probably surmise how people reacted to Isola's tweet.

Uh, is Frank Isola actually watching the same game as every other human?

My name is Frank Isola and I like to type words. Do words need to make sense? NO I say.

Nice of you to watch last week's game vs. the Hawks. RT "@FisolaNYDN: And John Wall cannot possibly play with any less intensity can he?"

John Wall may look "magnificent" but his emotion and intensity are really letting me down.

How many units of intensity will John Wall have in the second half?

John Wall played those last two minutes like he read on Twitter that some NYK writer questioned his intensity.

Don't forget to vote for John Wall's lack of intensity on http://t.co/aRAL3gklUZ for the No Intensity All-Star team.

NY Beat writers, stirring up the interwebs since 2004.

So, no one likes Isola?

Beal's winner got you all pretty excited. 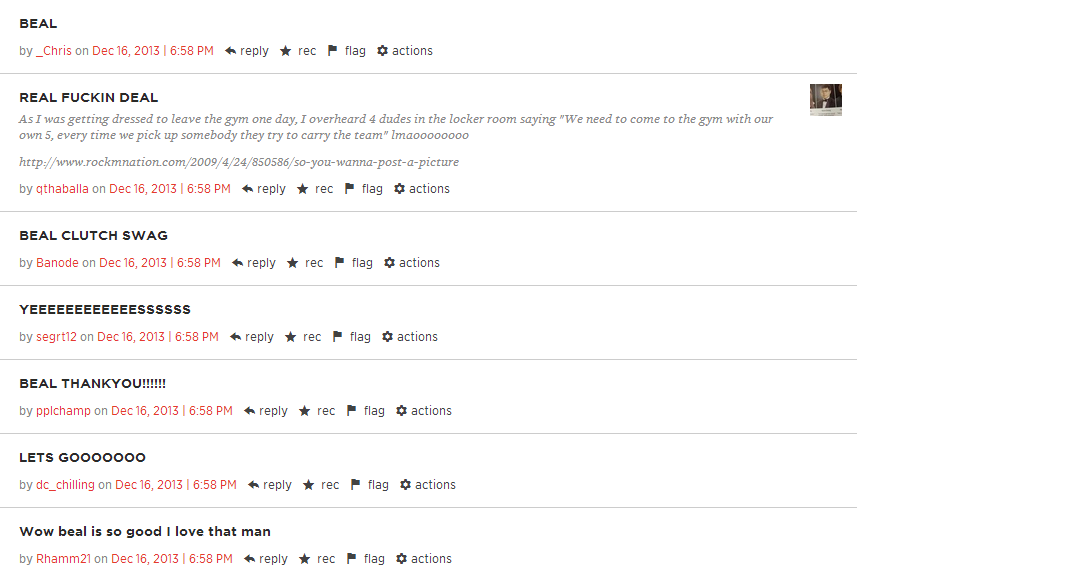