How Bradley Beal decided to go baseline against the Knicks

What the heck happened on that Bradley Beal game-winner? The Wizards players take you through the play.

Share All sharing options for: How Bradley Beal decided to go baseline against the Knicks

NEW YORK -- Nobody needed to tell Bradley Beal what the Knicks were going to do when he got the ball on the Wizards' final possession. He already formed his plan.

As the Wizards escaped the huddle, several different players gathered around each other for final instructions. There were many elements to choreograph, many places where Randy Wittman's complex play could be screwed up. But through it all, Beal had the whole thing diagramed in his head. He knew where he could find his opening.

"I knew in the huddle that if I came off a pick and roll, they were probably going to double me," Beal said. "So my first instinct was to reject the screen and go baseline if I had it."

It helped that Beal had done this before. A month ago, with the Wizards up one late in a critical game in Oklahoma City, Beal caught the ball on the same left wing. Thabo Sefolosha overplayed him, thinking he'd try to dribble to his strong hand and pull up for a jumper. Beal's response? A couple hard dribbles left, an extension of the shoulders to get by his man and an unimpeded finish.

"I had the exact same layup," Beal said. "I was kind of thinking it the whole time. Are they going to help baseline?"

You know now that the Knicks didn't in hilarious fashion. But it helped that Wittman drew up an actual play, one with tons of movement off the ball. There was John Wall dribbling the ball up, finding Beal and then screening away on Andrea Bargnani to give Marcin Gortat a head start on his eventual ball screen. There was weakside movement from both Martell Webster and Trevor Ariza, which pulled two Knicks wings away from the paint. And, of course, there was Beal going away from Gortat's screen instead of using it.

An oral history of the Knicks' breakdown

Posting and Toasting takes you through that final possession from the Knicks' point of view.

An oral history of the Knicks' breakdown

"That's just a great play that Coach called," Wall said. "Lot of movement going on the other side that kept the guys occupied."

"I was supposed to go set a screen away from the ball," Gortat said. "But I was like 'No. Bradley is rolling. Just give him a screen and let him do his job.'"

All of that movement confused the Knicks. At the very moment Beal made his decision to drive, the Knicks' defense looked out of whack. An instant before, Beno Udrih, guarding Beal for some strange reason, pointed towards the baseline, trying to tell Bargnani to stand there. Problem was, Bargnani never saw it because he was getting screened off by Wall. Once Bargnani fought over the top, he assumed a position on Beal's right instead of covering the baseline, and that was all Beal needed to see. 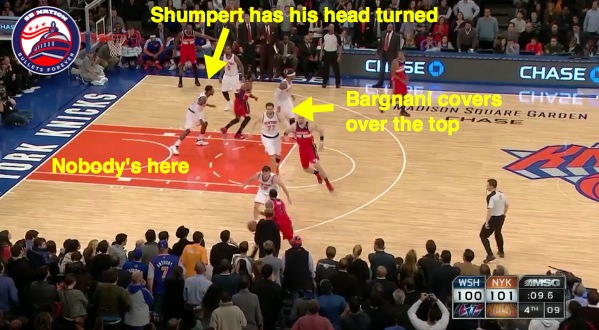 Shumpert eventually saw the play develop, but it was far too late. Beal was already at the rim.

"Bradley made a hell of a decision," Wittman said. "I think they were going to try trapping with Bargnani, so he faked the pick and roll and drove baseline to get to the rim."

Other Wizards were far less diplomatic about the Knicks' coverage.

"I don't know what they were trying to do. They screwed up"-Marcin Gortat

"I don't know what they were trying to do," Gortat said. "They screwed up."

Things got really chaotic once Beal scored. The horrendous defensive breakdown flustered the Knicks, and rather than call one of their three remaining timeouts, they took a second to yell at each other, then quickly threw it in to Carmelo Anthony. A timeout could easily have been called here, but it wasn't, for some reason. 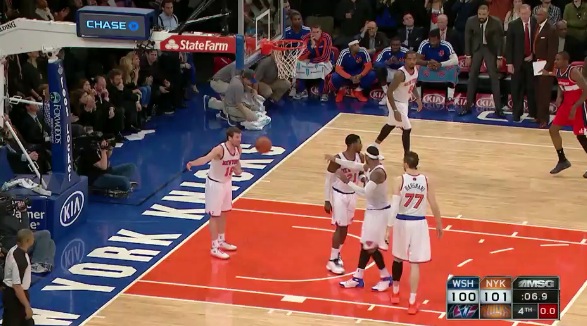 Knicks coach Mike Woodson took the blame, but got in a few jabs at his players while doing so.

"I probably should have taken a timeout there at the end, but you know, Beno grabbed it and the ball is in Melo's hands before I could even react," Woodson said. "I should have reacted a lot sooner once the ball went through the bucket. So, that's on me."

And Anthony, despite having plenty of time to argue with Udrih, deflected blame back to Woodson when asked.

But all that made for a wild final five seconds. The Wizards' goal was obvious: don't let Anthony get a three, because that was clearly what he wanted to do. Luckily, Ariza was in his face, and Wall came over late to bother the shot even more as it harmlessly fell away.

And later, the Wizards were relieved. Beal said he knew the Knicks had a foul to give and didn't use it, but had no idea about the timeout situation until after someone told him.

"Did they really?" Beal said with a shocked look on his face, as if he was being told Santa Claus didn't exist. "Oh. Oh wow." A few seconds passed as Beal stood there stunned. "Man, that would have changed a few things."

No matter. The Wizards won, and uncomfortable topics like giving up a big lead earlier in the game or Wall's own crunch-time struggles washed away. (Wittman, when asked if the latter concerned him, responded quickly. "No. No. We won.").

All because a second-year guard playing his first game back from injury saw an opening before the play even started.