When should John Wall be shooting threes?

John Wall hit five of eight three-pointers in Wednesday's win over the 76ers and is averaging nearly five attempts per game from downtown. Is this is a good development? We discuss when it's appropriate for Wall to rise and fire.

Share All sharing options for: When should John Wall be shooting threes?

A weird thing happened in Wednesday's win over the 76ers: John Wall shot a lot of threes. He made them, too -- five of eight, to be exact.

How odd is this? Two years ago, Wall made three three-pointers ... for the entire season. Prior to this season, he had converted on just 24 percent of his three-point attempts in his career. This season? Eight makes on 19 attempts, good for 42 percent.

Has Wall suddenly morphed into a sharp-shooter from deep? Probably not. But should he continue to take the three-point shot when he a) hasn't really mastered the mid-range shot yet, and b) is further away from the basket because of it?

There are two perspectives on this issue. One is statistical: if you shoot 33 percent on threes, it's like shooting 50 percent on twos, so exchanging mid-range jumpers for threes is an efficient play. The other is more traditional: you generally build up a shooting stroke by mastering closer-in shots and then moving back. There's also the thought that even if Wall is converting more three-point attempts, it's still better for him to be operating in the mid-range area because it puts him closer to the paint, where he can really do the most damage.

I was generally in the third category, because even if threes are better than mid-range shots, the optimal result is still Wall getting to the rim. But after watching last night's game, I now think there are at least two scenarios where you want Wall shooting the three when it's there.

The logic here is simple: corner threes are generally far more efficient shots than above-the-break threes. For one, it's a closer shot. For another, corner threes generally come after good ball movement, so they're usually open. In a very limited sample, Wall started taking this shot last year and had success with it. It's a much more efficient shot than a 17-foot pull-up jumper, so why not take it at times when the floor balance is good enough that a miss won't lead to an odd-man breakout?

Wall took two corner threes last night and made both of them. The first was contested and somewhat early in the shot clock, but I'm OK with it because the floor balance was pretty good. Trevor Ariza and Bradley Beal are in good position to retreat, as is Marcin Gortat, so the Wizards probably won't be victimized on the other end if Wall misses. In other words: it's a good gamble, because the upside outweighs the downside. 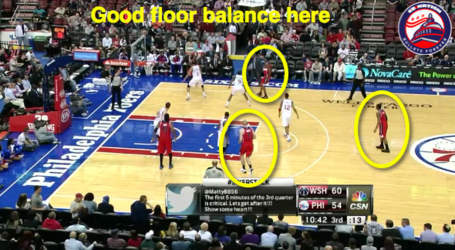 The other came when the 76ers zoned off him because of his reputation as a non-shooter and Wall responded by sliding to the corner and giving Ariza a baseline outlet on a drive that was otherwise going nowhere. 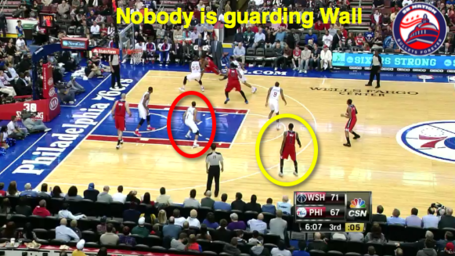 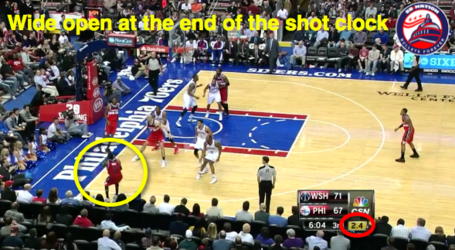 The floor balance here isn't optimal, but it's an open shot late in the shot clock. Wall made a great play to cut into this space and he has to take this.

Corner threes, therefore, are good shots for Wall to take. It's hard to drive from the corner, so this is the most efficient shot to take in these situations, even if Wall himself isn't a great shooter.

The other scenario where Wall needs to fire away freely is when defenders cheat off him to stop other players from getting to the hoop or attempting a clean look in the middle of the floor. If Wall is willing to make himself a threat in these situations, his defender will be hesitant to help in the future, which will open up shots for other players.

This is especially important because of Wall's backcourt partner. Beal is already good at coming off baseline screens, and he's only going to get better as his career progresses. Single-double sets and other Floppy action for him will be a part of the Wizards' playbook for as long as he dons this team's uniform. The Wizards also will take advantage of Beal shooting by using baseline screens to go quickly into a pick and roll on the move, which will prevent teams from forcing the play down to the baseline.

These sets will often place Wall on the opposite wing. If he doesn't turn himself into a shooting threat, teams are going to use his man to plug the middle and prevent Beal from getting good looks. For example: 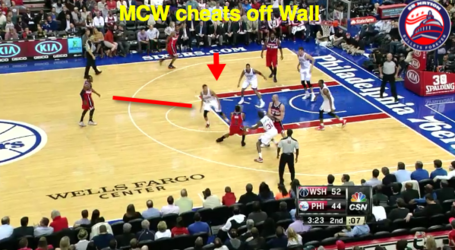 When teams do that, Wall has to be willing to step into that three-pointer and shoot with confidence to keep the defense honest. He does that here and knocks the shot down. 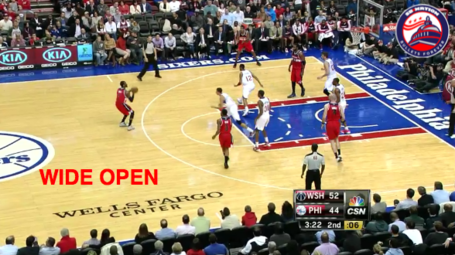 Obviously, shooting the three isn't the only option in these situations. When appropriate, Wall should attack a driving lane, either to score, dump off a pass to the big man or to kick out to an open corner three-point shooter. He can also cut off the ball if the situation presents itself.

But he also has to be willing to shoot the open three when it's presented to him. You're not going to get a better shot than this.

For now, these are the only two situations where I'm fine with Wall shooting threes. Given his ability to get to the hole and break down defenses, I don't want him bailing out the defense by trying to take threes when teams go under ball screens, and I don't want him taking handoffs and launching, especially early in the shot clock. He's not Kyrie Irving or Damian Lillard, both of whom are great jump-shooters, but don't have Wall's speed.