Bradley Beal has been stuck in shooting slumps like this before, so why is this one any different? Because he's forcing shots that he hasn't in the past.

Share All sharing options for: Bradley Beal's struggles show his next challenge

It says a lot about how well Bradley Beal performed in the preseason that we're so concerned over a shooting slump he's often encountered during his short playing career. The Bradley Beal we saw this time last year looked tentative with the ball in his hands, overburdened by the lack of weapons around him. While we can break down and psychoanalyze bits and pieces of his play, it's important to note that he's missing a lot of shots he normally makes.

Beal finished the preseason with a player efficiency rating of 25.75, the highest among players getting significant minutes on the team. All the qualms over the lack of practice he was afforded in the offseason were quickly put to rest as he fluently attacked the rim off the dribble. While all the attention was over John Wall's "leap" into stardom and how Nene's health would hold up over 82 games, fans had no reason to panic over Beal.

But through three meaningful games, Beal has just a 3.7 PER and is shooting just 32 percent from the field.

Why? The growth we witnessed in the preseason was substantial enough to turn heads around the league, to the point where help defenders key in on him and eagerly anticipate his movements coming off screens. The preseason afforded him the opportunity to take his refined ball handling to the limit, but it was the confidence he displayed that made all the difference. He regularly took players off the dribble, got into the lane and even showcased a flashy behind-the-back dribble or spin move to shake his defender.

Take this play in a preseason game in Cleveland. The Wizards load the opposite side with three players, clearing the lane and giving Beal a chance to make a play out of the pick and roll. 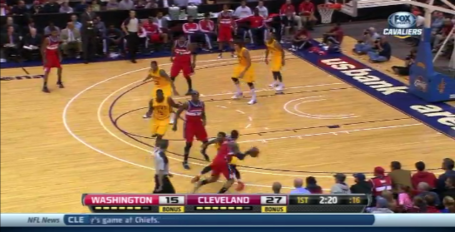 The second Anthony Bennett recognizes the play; he darts to the other side in an attempt to blow up the pick and roll. But Bradley wisely rejects the pick, and has a clear lane to the basket. 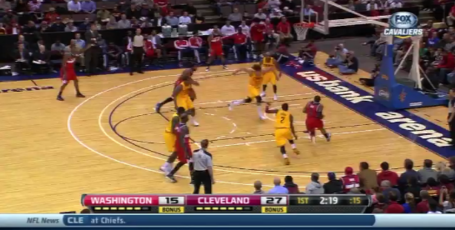 This is the kind of improvisation we haven't seen out of him in pick and rolls to start the regular season. He's 0 for 10 in these situations, per MySynergySports.com, mostly because he's been baited into taking contested jumpers, something he avoided last year. Defenders are trapping him, and he's had no answer for it. There will be an adjustment period as there is with all second-year players coming off a strong rookie campaign, but Beal hasn't even resembled the player he was last year.

Too many jumpers is the biggest issue. Over 70 percent of his shot attempts have come from mid-range or behind the three-point line, per NBA.com's stats page, and it's not hard to see why. He's forcing the issue, opting to take shots over defenders instead of making the correct read out of the pick and roll. He's moving east and west after catching the ball off screens instead of making a move toward the basket. Worse, he's failed to successfully attack hard closeouts.

Here, on a basic side pick and roll with Marcin Gortat, Beal again rejects the pick after seeing his defender overplay him to the right. But this time, the help defender is waiting along the baseline, and his primary defender is fighting his way over the screen. The lane isn't there.

In response, Beal takes the jumper over two defenders and doesn't even look at Gortat rolling to the basket.

This should be an easy read to make, but Beal is so focused on shooting his way out of his slump that he wastes a possession. This is a stark contrast from a year ago, where Beal would let his offense come to him. Some of it comes with the territory, as Beal is expected to take on more responsibility this year, but this goes back to what John Wall has also struggled with throughout his career: finding the right balance.

It's all part of the maturation process Beal is undergoing right now, and it's definitely something to keep an eye on throughout the year. This offense will go as far as their backcourt takes them, so both Wall and Beal will have to continue to evolve and adjust to defenses that are focused on stopping them. The Wizards can't afford more nights like their season opener, where Wall and Beal were a combined 14-39 from the field, and they're certainly not going to regain their optimal floor spacing from a year ago until Beal makes the pivotal tweaks to his game to get out of this slump.

There are 79 games remaining to right this ship, and it starts in the backcourt.