What is the Wizards' biggest problem right now?

Trying to figure out which one issue is plaguing the Wizards most during their 0-3 start.

Share All sharing options for: What is the Wizards' biggest problem right now?

So, 0-3. It's not good, no question. The schedule, as this piece indicates, is not easy coming up, and Randy Wittman is already on the hot seat on account of high expectations and the underwhelming beginning.

As we try to figure out exactly how the Wizards need to crawl out of this hole, it's important to set priorities. I'm going to list a series of problems that have plagued the Wizards so far and ask you all to help rank them in terms of which issue is most important to fix. You can also list other, but we're staying away from any front-office stuff because we have gone over that territory often and because there aren't any real immediate fixes there. The idea is that we're trying to figure out how to improve the mix that's already present. (We're also staying away from health for the same reason).

Why this issue is most important: Our max man hasn't made THE LEAP and is still showing the same kind of inconsistencies that he's displayed often in his career.

Why it's not: Wall hasn't played that badly, at least relative to the rest of the roster.

Why this issue is most important: The guy that lit it up in the preseason and was expected to take a huge step forward is shooting 32 percent, looks as scared as he ever did during the beginning of his rookie season and has a PER of 3.7.

Why it's not: Last year showed that Beal can break out of slumps if given time.

Why this issue is most important: The Wizards were so tightly aligned defensively last year, and yet this season, they all look like headless chicken. Seems like an issue.

Why it's not: Marcin Gortat just got here, and he needs some time to learn his teammates. Also, Miami makes a lot of teams looks bad.

Why this issue is most important: I could be wrong, but it seems like the Wizards are trapping pick and rolls more aggressively this year than last year, which is bad because it's forcing a lot of rotations in the back that are difficult for the players to make. A softer strategy on those plays will induce more mid-range jumpers and allow the rest of the players to stay at home more easily.

Why this issue is most important: Wall, Beal and Martell Webster were a great trio last season, and Trevor Ariza was very good as the "sixth starter," yet Wittman decided to start Ariza for defense and bring Webster off the bench to provide a jolt for the second unit. It hasn't worked out well for either group.

Why it's not: Both Ariza and Webster are playing relatively well. They're not the problem.

Why this issue is most important: These have been some pretty basic breakdowns. For example, why are four players right under the hoop after this shot already hit the rim. 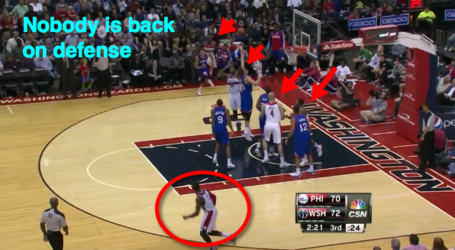 Teams tend to run more early in the season, and because of the Wizards' awful floor balance, they've feasted.

Why it's not: It's not like the half-court defense has been any good either.

Why this issue is most important: The transition defense has been exacerbated by so many sloppy passes, particularly from Wall. This is an issue going back to the preseason, and it hasn't improved.

Why it's not: Somehow, six teams, including the undefeated Pacers and Rockets, have coughed it up on a higher percentage of possessions than the Wizards, per NBA.com.

Let us know if so.