What can be done to improve the Washington Wizards' bench?

The Wizards have a great starting lineup and no depth. Is there anything that can be done to fix the bench?

Share All sharing options for: What can be done to improve the Washington Wizards' bench?

The Washington Wizards' starting lineup is balling out of control. Through the season's first 13 games, the four man group of John Wall, Bradley Beal, Nene and Marcin Gortat, almost always flanked by Martell Webster or Trevor Ariza, has outscored their opponents by 7.1 points per 100 possessions in the 20.5 minutes per game they've averaged together, per NBA.com. Not too shabby.

There are a couple of caveats here. The starters have played more minutes than normal against other teams' second units, which has likely inflated their per-minute statistics. Washington has also played the league's eighth weakest schedule thus far, with games against Brooklyn and New York as well as two contests against Philadelphia contributing to their apparent dominance.

Nonetheless, Washington's core is playing well, yet the team is only 5-8. Why? For the most part, it's because the bench stinks.

Of the team's current bench rotation, only Jan Vesely and Martell Webster have looked decent. Even that understates how weak the bench is, though. Webster has played many minutes next to the starters due to Ariza's injury, and Vesely is, well, Vesely.

Indeed, the bench is a problem. With little cap room to work with, the team doesn't have a lot of flexibility to come up with an external solution. Even if it's just re-arranging the deck chairs on the Titanic, there are a few things the Wizards could try with their existing group. 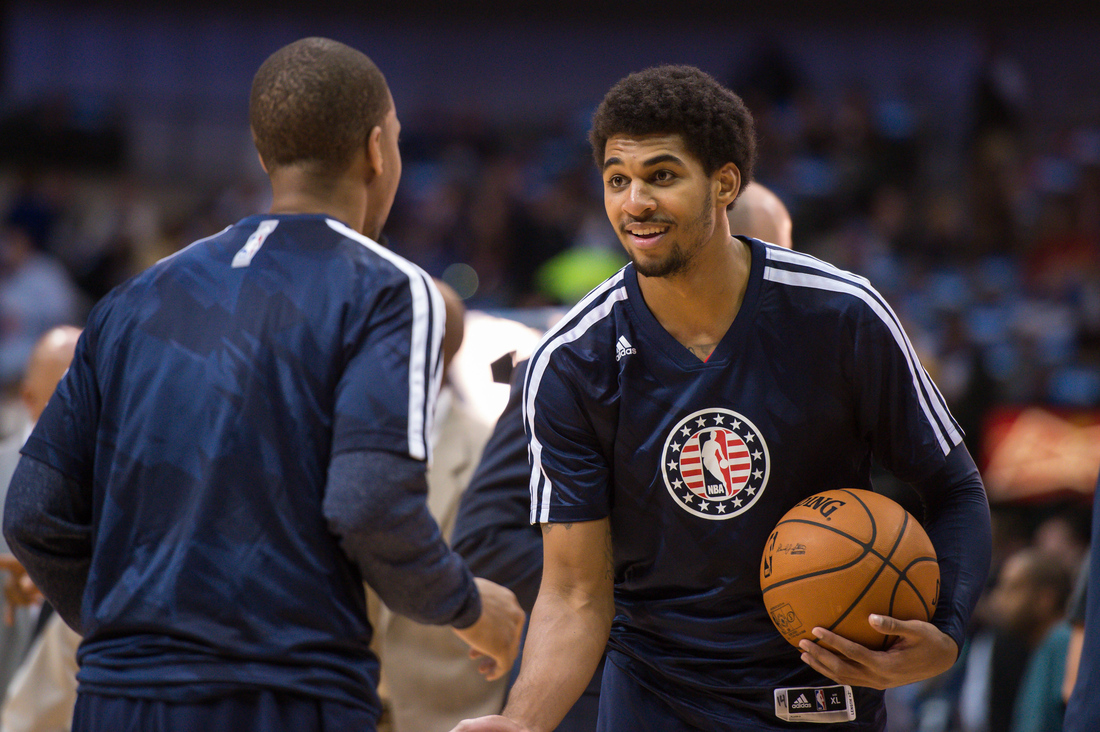 Maybe it's time for some trial by fire for Glen Rice, Jr. He's a volume scorer who's going to take a lot of lumps on defense and likely drive Randy Wittman insane with his shot selection and decision-making. That said, he's the only player other than Wall who appears comfortable creating shots off the dribble. Even if he's horrible initially, he should eventually settle into a groove in which he either puts up a few points with an acceptable level of efficiency or a lot of points with a terrible level of efficiency. Either would be better than what Washington currently has.

With Rice firing away, the role players on the bench -- Vesely, Webster or Ariza, a healthy Otto Porter, even Kevin Seraphin -- would be able to fall back into their natural roles as finishers off defensive breakdowns. Granted, this would require Rice to develop as a passer, but he's shown himself to be capable of this in the past. In the D-League, he averaged 2.6 assists in 26.7 minutes per game (3.2 per 40 minutes when you adjust for pace) which is a perfectly acceptable rate for someone who's essentially just a bench energizer. He was also efficient (1.04 points per play, 60 percent true shooting percentage, 49 percent from the floor), so even if he goes into full on chucker mode, he could wind up doing it with the efficiency of a Nick Young or a Jordan Crawford. That's not great, but teams can live with having someone like that on the floor for 15 minutes a night.

Learn from last year and play Nene with the bench

The Wizards finished dead last in the NBA in offensive efficiency last year and were at their worst in the first few weeks of the season before Nene came back. While no one would mistake that version of the team, one in which Beal still hadn't found his footing as a pro, Wall was out with an injury and Jordan Crawford was using 30 percent of the team's possessions, with the Nash/Amare Suns, things got noticeably better when Nene was on the floor. Washington's offense put up 103.6 points per 100 possessions with Nene on the floor through the end of December that season, far better than the team's overall offensive rating of 92.8 points per 100 possessions during the same time frame, per NBA.com's stats page. This was largely due to Nene's ability to create shots for himself in the post and pass out to shooters like Webster when he was double teamed by opposing second units.

This might also have the added benefit of improving the starting lineup's ability to put up points. Nene and Gortat work together, but his ability to score and pass isn't as valuable to the starting lineup due to Gortat's ability to run pick and rolls with Wall. Using a healthier Al Harrington or one of the wings playing as a smallball power forward with the starters would potentially give the team more spacing in half-court situations, opening things up even more for Wall. Similarly, a player like Vesely or even Trevor Booker could replicate some of Nene's rebounding and cutting to the rim when plays aren't run specifically for them.

Nene is 11th in the NBA in terms of points per play on post ups this year, per MySynergySports.com, and he finished 84th last year. That also doesn't include all the assists or hockey assists he gets when he uses his passing skills to kick out to open players. No one is going to mistake him for Kevin McHale, but the dude can get it done in the post, especially when he's being checked by the weaker defensive players that tend to come off the bench. 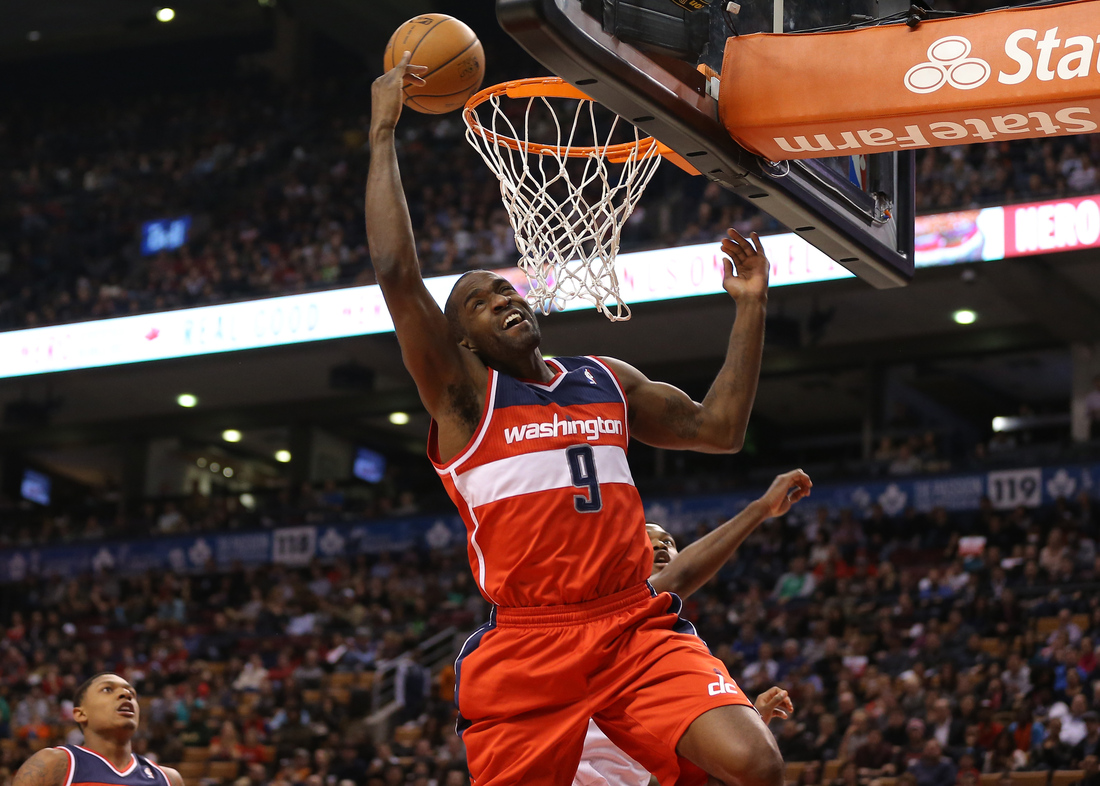 Webster will move back to the bench now that Ariza is back, and his scoring punch should help. Unfortunately, he's the type of guy who finishes plays that other people create, and isn't the off-the-dribble creator the bench needs. Without the threat of Beal, Nene and the Wall/Gortat pick and roll, Webster wouldn't be the beneficiary of the open looks and transition threes that he's been feasting off of during his time in Washington. Sure, he played well before Wall came back last year, but that was with Crawford and Nene regularly setting him up.

Even if Webster was able to put up points on his own while maintaining a reasonable level of efficiency, he wouldn't do much to make the players around him better. Last year, Webster set a personal record by recording 2.3 assists per 36 minutes, a middling number for a wing. He's not selfish, he just can't break defenders down in one on one situations or run the pick and roll, so it's rare that he has the ball in his hands with a good opportunity to pick up an assist.

Washington has 15 guys on guaranteed contracts and is dangerously close to the luxury tax threshold, but they could always cut someone. There may be a few guys out there who could come in and create plays for the second unit. The team doesn't necessarily need someone to come in and simply get points, they just need someone who can drive and kick or run a pick and roll. Trading Ariza for someone like Lou Williams, who may not fit with Jeff Teague-led Hawks, could work out well.

Similarly, there are a couple of guys floating around on the periphery of the league who might be able to come in on a minimum deal and contribute. Rodrigue Beaubois isn't doing much and looked good for about three months four years ago. Terrence Williams might have grown up a bit since falling out of the league and is a capable man to man defender and playmaker. There are other people out there, none of which look like sure things, but it wouldn't hurt to find out. Worth noting: someone with a guaranteed contract would have to be cut.

Actually, that probably wouldn't work. There isn't a single player coming off the bench for Washington who excels at anything other than cutting to the rim or hitting spot-up jumpers. Those shots only become available when defenses have to account for someone who can get to the rim and pass or score in isolation at a high enough level that they command a double team.

The closest thing the bench has to someone like that is Seraphin, who still can't pass out of a double team. He finished last season 117th in the NBA in points per possession when posting up and 86th in points per possession as the dive man in the pick and roll, per MySynergySports.com. This is encouraging, but he's far from elite. Unless he's able to set up his teammates, he's probably going to do more harm than good. 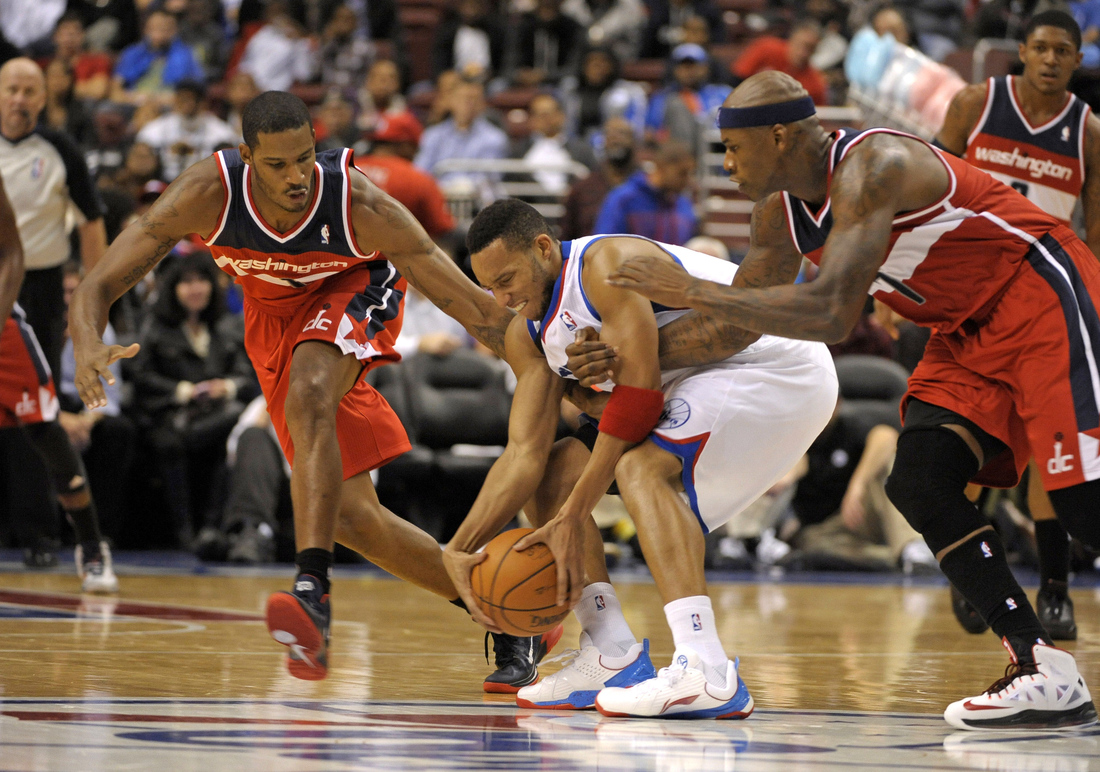 Ride out the storm until everyone is healthy

Harrington and Ariza are both capable of occasionally creating shots, even if they're calling their own number more often than not, and the bench should look a lot better once they're back and have established a rhythm. Harrington in particular has thrived as a first or second option with second units. Having Ariza around will also allow Webster to soak up some of the minutes that are currently being distributed to the struggling Garrett Temple.

Eric Maynor might also get better with time and with more options. A lot of the heat he's been getting seems to be related to him pounding the rock for 14 seconds then tossing up a floater. Maynor's always been a pass-first point guard and he should look better playing next to more guys who can either create their own shot or who are better in catch and shoot situations. It's a lot harder for him to create shots for his teammates when defenses don't respect them.

It's also unlikely that Maynor continues to shoot as poorly as he has. He's making less than 25 percent of his two point field goal attempts this season, including only 36 percent of his shots at the rim. Even though he's never been much of a scorer, those figures are so bad that it would be almost impossible for there to not be some regression to the mean as far as his shooting percentages.

How would you fix the team's bench?