An excerpt from this week's SBNation.com column on the Wizards' point guard.

Editor's Note: This is an excerpt from this week's Prada's Pictures, my regular column on SBNation.com. John Wall was the subject of the "Under the Microscope" section. Wall, by the way, won the Eastern Conference Player of the Week award, so bully to him for that.

The rest of this week's piece focuses on the Clippers, and there are notes from other teams around the Association. Click here to read it.

My Bullets Forever colleague Thomas Pruitt argued that we're in the middle of John Wall's official leap into superstardom. I'm not sure I'm ready to go that far yet, because we've seen Wall dominate for week-long stretches before only to fade back. But there are several notable areas of growth that make you think that leap really is happening.

Some of that is with his jumper, which looked excellent against the Raptors and Knicks after not looking so great earlier in the season. His shooting motion has a lot of moving parts, especially off the dribble, which explains why it can be so inconsistent. But when he gets this kind of balance, arc and follow through, he'll get good results.

But a lot of that growth is in his playmaking. Wall's always had great speed, but he's now seeing several steps ahead, anticipating ways to tilt the defense even if he's not getting the primary assist. Consider what's happening in this screenshot: 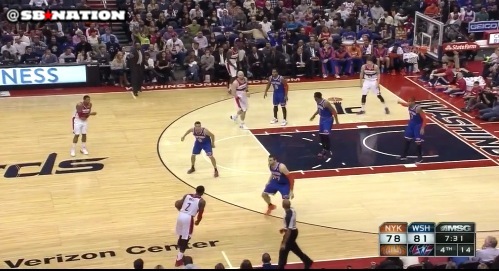 This looks like an ill-fated isolation attempt first glance, the kind of "hero ball" Wall is not suited to fill. Indeed, Wall has already waived Marcin Gortat away after he tried to come set a screen. But as it turns out, Wall is not looking to take Andrea Bargnani off the dribble here. He's spotted that the Knicks help defenders seem confused and is trying to figure out how to take advantage of it.

And ultimately, this is what he decides. 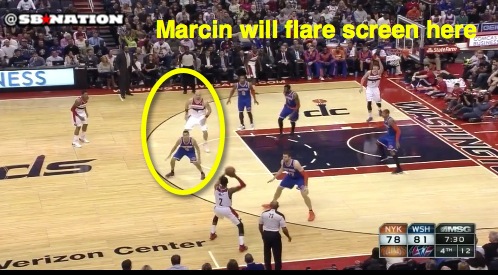 Wall and Gortat make eye contact, and Gortat comes to set a backscreen on Pablo Prigioni, who is guarding Bradley Beal. Yet, the goal here isn't to get the ball to Beal specifically. Wall knows the scrambled Knick help defenders will have trouble rotating, and thus he's set up the floor balance so that a pass to Beal will set up a subsequent ball rotation to Martell Webster in the opposite corner. Wall can't pass to Webster directly, but he can have one teammate clear out Beal's man for a screen to open a passing lane and convince Webster's man to help.

Sure enough, once Gortat's flare screen opens the pass to Beal, Webster's man, J.R. Smith, freaks out, comes to stop Beal and leaves Webster, one of the league's deadliest corner shooters, all alone. 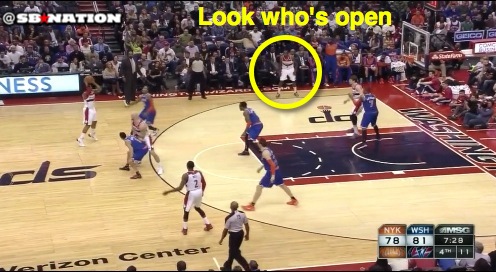 Webster knocked the shot down and Wall manufactured something out of nothing.

Sure, this was bad defense, but that's not really the point. It became bad defense because Wall studied the Knicks' jumbled alignment and created a multi-pronged plan out of thin air to exploit it. He processed several rotations in advance and determined that if he manipulated his teammates just the right way, he could get his corner three-point shooter a wide-open look.

For his efforts, he received zero stats in the box score. If you're wondering why Wall leads the lead in secondary assists per game, according to now-public SportVU data, this is why.

Wall's pick and roll play has also taken a step forward. Here, the addition of Marcin Gortat has paid off big time. Gortat is one of the league's best rollers, with expert timing and soft hands to catch any passes. His addition made it necessary for Wall to develop patience and figure out ways to draw help defenders to him so he could take advantage of Gortat's skills.

Gortat, and Nene to a lesser extent, has also allowed Wall to unleash his skills on transition drag screens. Rather than always charging towards the rim, Wall is now veering into his bigs on the break, creating pick and roll finishes on the fly before the defense gets set. For example:

That second one included a nifty hesitation dribble to get by J.J. Barea and draw Dante Cunningham to open up the pass to Nene. Again: a sign of growth.

No question, Wall's ultimate success requires that he continue to improve as a shooter, and we need more than two good games to say that's fixed. Even his shockingly-not-terrible three-point shooting has come in a small sample of attempts.

But Wall's now reached the point where he can control games without that jumper falling. He shot 5-17 against Minnesota on Tuesday, but still conducted a 104-100 win with 16 assists and one turnover. That's happening because he's learning the balance of when to attack and when to facilitate, when to push in transition, how to change speeds and how to use different movements to set up what he wants instead of just taking what the defense wants.

The process of putting it all together takes time for young point guards. Wall is getting closer to the end goal.