How bad is the Washington Wizards' bench? It can't even overcome John Wall's awesomeness and properly lose a game anymore.

Two days ago, the Washington Wizards couldn't overcome their horrific bench despite 37 points from John Wall in a 96-88 loss to the Toronto Raptors. One day later, the bench wasn't much better, scoring only six points as Randy Wittman played all of his starters for 35 minutes or more and only three reserves in a desperate attempt to defeat the New York Knicks at Verizon Center.

It worked. The Wiz won 98-89, thanks mostly to another sterling effort from Wall, who dropped in 31 points to go along with seven assists and a team-high plus-16. Marcin Gortat was also huge, with 16 points and 17 rebounds, and though Bradley Beal remained in a mini-shooting slump (1-for-7 from three), he still found a way to chip in 18 points, six assists and five boards. Oh, and Martell Webster had 19 points on 5-of-10 shooting from deep.

If you're good at math, that means you know the Wizards got 84 points from four starters. Nene scored eight, leaving Washington's reserves to make up the six-point difference. They tried their damndest, but the Wizards' reserves just couldn't give this game away, not when Wall & Co., were playing so well.

19.8 - Scoring average of the Wizards' bench, dead last in the NBA.

41.1 - Wall's season shooting percentage, up from 35.8 percent just two games ago. In his last two contests, Wall has shot 25-for-39, or 64.1 percent. Oh, and don't look now, but Wall is also shooting 34.1 percent from three this season, which would be a game changer if he can keep that up.

44.2 - Opponents' shooting percentage over the Wizards' last five contests. In their first eight games of the season, the Wiz allowed opposing teams to shoot 48.8 percent. It's a small sample size, but that's a big improvement, and hopefully indicative of progress on the defensive side of the ball.

Slowly, slowly, Jan Vesely is finding a niche as a hustle guy that he might be able to turn into a role down the road.

#wizards starting unit should get a joint endorsement deal with Five Guys. Right now, that's all they've got.

DC needed a hero, a guitar hero, and that man is Randy Wittman. #Wizards pic.twitter.com/oZ3GfuJ30m 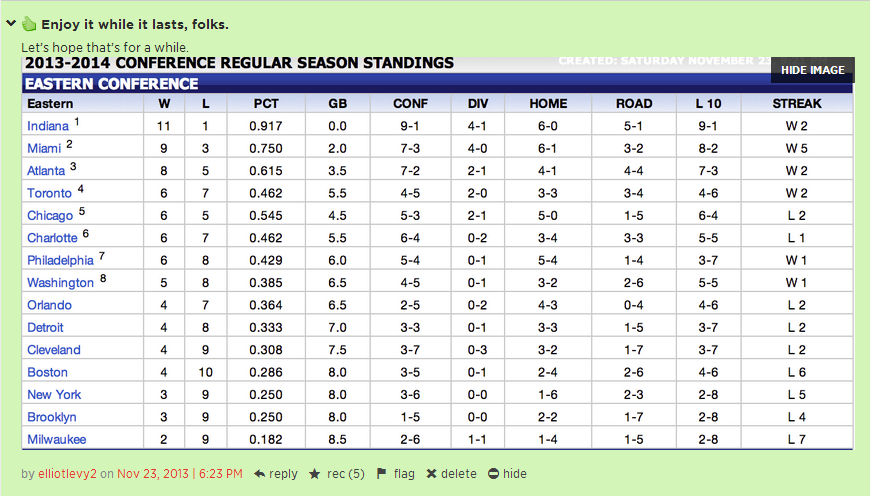 Knicks vs. Wizards: John Wall lights it up again in 98-89 victory