Wizards vs. Raptors final score: Washington gets doomed by its bench, loses 96-88

Another wasted effort by the starters, including 37 points by Wall, as Washington's bench kills its second half comeback in Toronto.

Share All sharing options for: Wizards vs. Raptors final score: Washington gets doomed by its bench, loses 96-88

This is getting ridiculous.

The Wizards stormed back in the 3rd quarter after a weak end to their first half, but their stagnant bench play allowed the Raptors to get back in the game and take over.

It's becoming a pattern for this team. The games are played in a see-saw fashion. If they get in the hole in the first half--like they did tonight--they climb out and give us a heart attack or five. If they get up big early, then the lead dissipates slowly... slowly... like a balloon with a tiny pin-prick in it. But one annoying pattern has emerged: the starters are good, and the bench is ATROCIOUS.

Bradley Beal and Nene continued their great play, Marcin Gortat is cleaning the glass like a pro, Martell Webster is letting it rain from the outside and hustling on defense. John Wall went BANANAS tonight and scored 37 freaking points on 15/21 shooting. 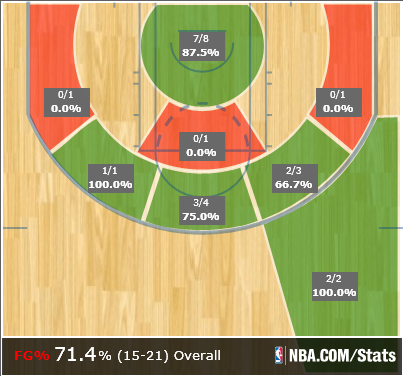 And then the bench goes and wastes all of that with some careless turnovers, poor passing, poor shooting, poor defense, dumb fouls, and lethargy.

Randy Wittman's actually doing a decent job staggering his rotations recently, but it's no surprise that Beal leads the league in minutes played this year and the rest of the starters--none of whom are exactly injury-free in their careers--are averaging around 40 minutes per game. Yeesh. Jan Vesely and Garrett Temple played the most off the bench, but that's mostly because Gortat was in foul trouble for a while and Wall needed to take a rest.

At least we got to see this, right (H/T @ananth_pandian)?

See you all tomorrow night when the Wizards face the Knicks at the Verizon Center and hope the bench shows up to play.

Wizards vs. Raptors: Washington beaten by Toronto and its own bench