John Wall continues to search for the right balance

Finding an equilibrium between being aggressive while also making defenses pay for not respecting his perimeter shot has been difficult for John Wall in the four-year career. Was Tuesday's win over the Timberwolves a turning point?

Share All sharing options for: John Wall continues to search for the right balance

WASHINGTON -- Two statements, each with a kernel of truth, each contradictory to the other:

This duality, Catch 22, whatever you want to call it has caused superstardom to elude Wall thus far in his four-year career. For Wall to achieve his optimal level of success, he must be a competent enough shooter to make defenses pay for playing off him, and yet still spend more time attacking and breaking down a defense, which is his strength. He's spent time vacillating between one extreme or the other throughout his career. Recently, by his own admission, he was spending too much time doing the former.
What is the optimal balance? We don't know, but it may have happened in Tuesday's win over the Timberwolves. Wall struggled with his shot, taking when appropriate if the Timberwolves sagged into the lane, but he also did a ton to break down the Timberwolves' defense, notching 16 assists against one turnover. He had one of those "he didn't shoot well, but he controlled the game" performances.
"That's a solid point guard right there," Randy Wittman said afterwards, with emphasis.
Was this a specific shift in Wall's mentality? Not necessarily, says his coach.
"He's got to have confidence in that 15-foot jump shot. He's got to take it"-Randy Wittman on John Wall
"They played him so far into the paint tonight, so he couldn't drive. He's got to have confidence in that 15-foot jump shot. He's got to take it," Wittman said. "Now, if he's not going to take it with confidence -- and that happens -- then move the ball on to the next guy. You don't have to take it. But I want him to. If they're going to play him like that, he's got to knock that down, and then it opens things up."
And not necessarily, says Wall himself.
"I need to get a little better at getting to the free throw line a little bit, but I did a great job of finding my teammates [tonight], and that's the biggest key," he said after the game. "Just trusting those guys and believing in those guys to make plays, knowing that I don't have to make all the plays all the time."
And not necessarily, say his teammates.
"John needs to continue to do what he's doing," Bradley Beal said. "We never pass up open shots. If they're going to continue to go under on him and there's all that space created, we want him to shoot that shot. We probably won't get a better shot than that."
"He has to take those jump shots, because in the end, we're going to need him to make one like he did at the end of this game," Garrett Temple said. "He needs to stay in tune offensively, take those mid-range jumpers when they're given to him, but also, like he did tonight, probe and find guys."
Confidence is a noun players and coaches use far more than scribes that pour over shot charts and see a sea of red from mid-range. Those players are more process-oriented, with more investment into improving for next time rather than dwelling on last time. It's in everyone's best interest to say that Wall needs to keep his head down and be himself. Self-doubt leads to dwelling on last time, which leads to fear of repeating last time.
Still, there are strategic fixes for maintaining the balance between aggression and taking what the defense gives you. Wittman suggested that it's in transition where Wall really must attack, something he hasn't done nearly as often this season.
"I think that if he were to [drive], because of the way they were playing him, he was going to turn the ball over trying to get to the basket," Wittman said. "He has to try to do that more in transition than in a half-court set."
Wall himself said that he has to constantly remind himself when it's appropriate to shoot the jump shot he's being gifted by teams correctly skeptical of his ability to convert it.
"I definitely don't need to take [jumpers] early in the shot clock" -John Wall
"That shot's going to be there every time for me, so I don't have to take it every time [it's there] and I definitely don't need to take it early in the shot clock. If I can get the ball back later in the shot clock and there are like 14 or 12 seconds left, I can take it then," Wall said. "But [it's better] to just move the ball and get some flow into our offense."
In this respect, Wall still has much room for improvement. Wall took 10 two-point jumpers last night, with five of those came in the first half of the shot clock. It's a problem he's had all year, and it carried over. This attempt in particular, where he pulls up despite Beal curling off a baseline screen as part of the set play, is the kind of shot he needs to avoid taking. 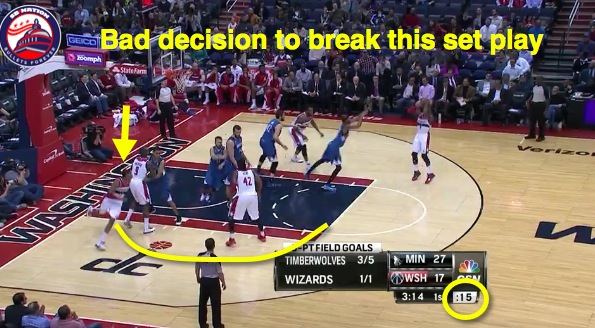 But at least Wall can put his problem into words. The next step is being able to act on it.
And being able to act on comes by not dwelling on the numbers. Wall can't stop taking certain shots because he's shooting X percent from Y range. He needs to understand when to take certain shots within the flow of the game, which, in turn, will cause his percentage from Y range will rise.
And above all else, he has to remember that scoring is just one part of his game.
"He had 16 assists tonight," Beal said. "That speaks for itself."

Wizards vs. Timberwolves: Washington rallies from 16 points down to win