Wizards vs. Cavaliers: Two paths diverged on a court

The Wizards and Cavs have been rebuilding for roughly the same number of years and had similar goals coming into this season. They also had similar early-season stumbles, and they both needed a win this past Saturday.

Share All sharing options for: Wizards vs. Cavaliers: Two paths diverged on a court

WASHINGTON --"You know, I've said this before: I'm still searching."

Cavaliers head coach Mike Brown wondered aloud about his team's offensive woes this season and his desire to experiment with his rotation. In the not-too-distant past, Brown knew exactly who was getting off that Cleveland bench, in which order, and for how many minutes. That team that terrorized so many in both the Eastern and Western conferences is a fleeting memory at this point.

It seems like eons ago when LeBron James and the Cavs would roll into the Verizon Center on a Wednesday Night for an 8 p.m. tip on ESPN. Wizards fans felt this rivalry all too well; it was these LeBron-led squads that their team fought to a draw during the regular season, only to deprive them of satisfaction in the postseason.

You can always have a rivalry if there's contention, bad blood, and mutual respect masquerading as disinterest.

Cavs fans like to pretend that there was no rivalry. After all, they say, can it be called a rivalry if only one side beats the other in all playoff meetings? As evidenced by the Cavs-Celtics rivalries of the same era, the same Celtics who always beat the Cavs in the playoffs, you can always have a rivalry if there's contention, bad blood, and mutual respect masquerading as disinterest.*

For three seasons, these Cavs and the Wizards embarked on different strategies to climb up the playoff ranks in the Eastern Conference with an end goal of winning an NBA championship. Of course, neither team in that era was able to reach its goal, and for the past four years, both have been trying to figure out the right formula to get back to where they were. Through a combination of high and low draft picks, overseas acquisitions, flyers on guys with injury histories, veterans with a little bit of know-how and benches that were seemingly assembled in a local YMCA, these two teams rolled into this season looking to sneak into the playoffs on strong defensive play and their offensively-talented backcourts.

Then when they actually started playing games this season, they realized that would be a lot harder than it looked. At 4-7 and 2-7, the Cavs and the Wizards have both seemingly let this season get away from them. Saturday was pivotal to both teams to try to right their paths forward this year.

The Wizards came back home after a nail-biter of a loss to the Thunder, a lackluster outing against the Mavericks and an ... educational ... experience against the Spurs. It doesn't help that the defense that got the Wizards noticed last season hasn't shown up at all this year, and neither does shooting below 70 percent at the FT line as a team. No, not much of that helps at all.

The Cavs came to Washington on Saturday after a massive loss to the Bulls, a walloping from the Timberwolves and their second loss of the season to the Bobcats. Throw in some purported locker room drama and a rumored-to-be-disgruntled player with a mysterious illness who doesn't travel with the team, and you've got a bonafide mess on your hands.

"We had a lot of good performances from a lot of different guys," Brown said after the game.

Former free agent Earl Clark and undrafted rookie Matthew Dellavedova helped the shorthanded team stay in the game and back up Kyrie Irving's tremendous 41-point explosion and leadership through a tumultuous week.

"We were kind of discombobulated. Andrew [Bynum] hadn't practiced, and I threw him out there to start," Brown laughed.

Brown made even more light of the team's upheaval later.

Postgame laughter from a coach can mean many things. It can mean relief that they were able to close out a hard-fought game. It could also mean that an oft-criticized coach coming off a 3-game losing streak is relieved that he just bought himself some more time before being lambasted again. Or more embarrassingly for Washington, it could mean "I have no idea how the hell we got away with it."

On the other end of the arena, Randy Wittman did not rush out to speak to reporters. When he eventually came out, he was short and spoke in the tropes we've come to expect from coaches.

No smiles, and definitely no laughter. Just replaying the whole thing in his mind while onlookers tried to join him in his retrospection.

"I'm searching," the coach lamented after the loss. "I got to find a consistent group that's going to go out there and produce. I'm still looking for that." 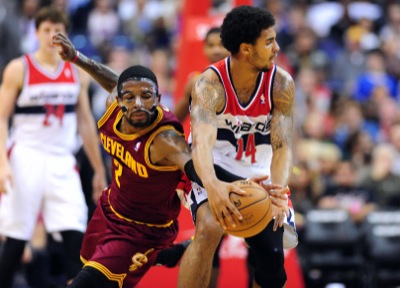 Is there any hope for a turnaround?

As cliché as this sounds: both of these teams needed a win on Saturday. The Cavs' next game is against the Wizards again on Wednesday, and the Wizards play Minnesota on Tuesday. Splitting a home-and-home for Cleveland would be ideal, and with the way the Wolves have been playing lately, a win on Tuesday would be hard to come by. Saturday, by all accounts, should have been a W for Washington. Instead, the Cavs have a spring in their step heading back to Cleveland, the Wizards are left searching for answers.

It's hard to tell from just one arbitrarily-defined must-win game whether paths have been righted or lost forever--in fact, one game probably can't tell us that at all. But for these two teams that have been running alongside one another for so long, Saturday night made it clear that while they've both got a long way to go, Cleveland's closer to getting there.

*When Soulja Boy and Jay Z get involved, you better believe there's a damn rivalry.