The things we expected the Wizards to depend on this season -- John Wall and defense -- have been seriously off this season. It's worrisome, but not hopeless.

Share All sharing options for: Losing to the Cavs and reflecting on the Wizards at 2-7

This isn't really a mathematically proper time to reflect -- nine games is roughly 11 percent of the season -- but sitting at 2-7, I'm admittedly a little worried about the Wizards. Last night's OT loss to Cleveland, one that saw Kyrie Irving absolutely blow up in front of our home crowd, was an especially hard one to endure.

The mistakes this team made were both big and small, and they happened on both sides of the court. John Wall, the the max contract man, looked absurdly passive around the rim, often passing up opportunities to attack and draw fouls in favor of dishing out to shooters. As he kept settling for mid-range jumpers, Wall ended up 3-for-13 with nine points, making a 12-assist performance look surprisingly mediocre in person.

Guarded often by Irving, not exactly a defensive savant, and former Saint Mary's guard Matthew Delladova -- playing in his fifth career NBA game -- Washington's deadly combo of Wall and Bradley Beal combined to shoot 14-of-38 from the field with a total of five free throw attempts.

Frankly, the shooting percentage isn't what bothers me so much -- as we saw on the other side with Irving, who had been struggling most of this season, good players can have bad games and vice versa. But against this kind of perimeter defense, Wall and Beal had the opportunity to attack and set a tone for the rest of the offense. Instead, we saw an array of mid-range jumpers and three-pointers that just weren't falling Saturday.

Let's remember that we're only nine games into the season, and things can change rapidly over an 82-game slate, but right now, I'm worried yet hopeful. Here are a few reasons why.

(a) John Wall isn't the same this season. Assists be damned, he's not attacking defenses in the same way, particularly when it comes to finding his own shots. I know we're all happy about his improved jump shot, but remember how we were all worried he would fall in love with it? 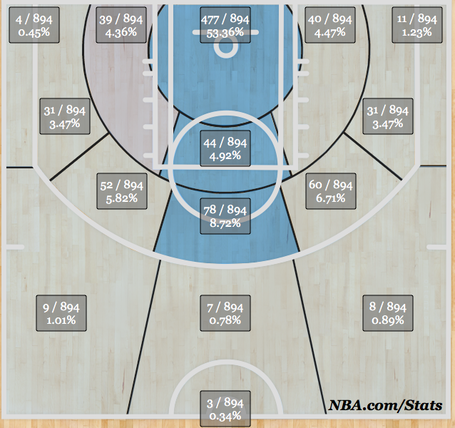 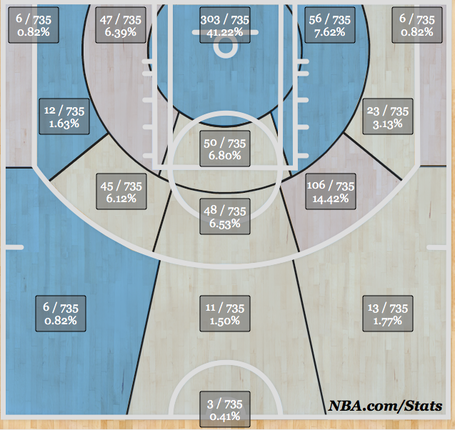 And here's this season: 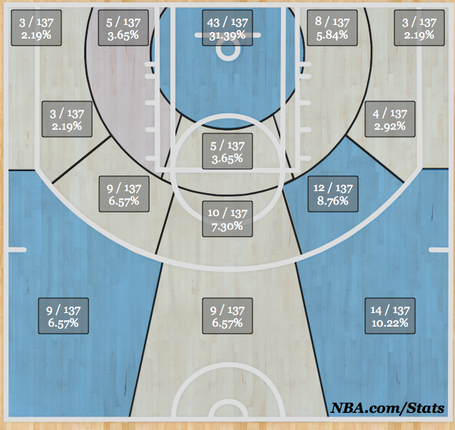 Many of those shots have moved beyond the arc, and it's good to see Wall expanding his range. But he's struggling badly with his mid-range shots this season, and by dropping a lot of the closer shots from his arsenal -- along with the free throw opportunities that come along with that (he's taking two fewer a game this year) -- he's just a worse player.

We all want to see John expand beyond the three-point line like Derrick Rose and other great point guard have done, but right now, he's working on that at the expense of what he does best. And while the Wizards' offense looks good at times, this is worrisome.

(b) We need to talk about Kevin Seraphin. I know it's only 79 minutes, but right now, he's averaging nine fouls and nearly five turnovers per 36 minutes. He's been a mistake-addled mess on the court, which explains Wittman's hesitance to play him. The problem is the lack of options, particularly when we're expecting Nene to handle a starter's workload for 70-plus games. Last night, Jan Vesely got the minutes against Cleveland, and frankly, he didn't look all that terrible. It might not be surprising if we start seeing more Jan than Kevin for a while.

(c) Playing off of the problems with Seraphin and the rest of the Wizards' front line, care to take a look at the bottom-five on the leaderboard for FG percentage allowed inside five feet? 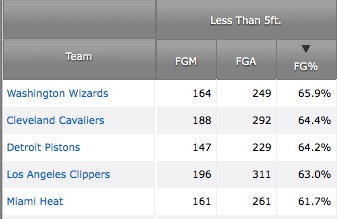 As you can tell, allowing teams to score near the basket doesn't completely prohibit winning, but the Heat and Clippers are the best offenses in their respective conferences while the other three teams are all below .500. The Wizards also allow the eighth-highest FG% from 5-9 feet and the fourth-highest from 10-14 feet. Last season, with Emeka Okafor in the middle, this team performed much better on defense, and that starts in the middle.

Wittman said positive things about Marcin Gortat before Saturday's game, and I think he's often played well this season, too. But the bench guys have proven a huge problem and lazy perimeter defense has given offenses the constant advantage inside 15 feet. We're only nine games into the season, but these problems won't get hammered out in a week.

(d) So I'm not really jumping ship yet, because the signs of a better team still exist on this roster. We haven't seen Otto Porter in action yet, and many of this team's most-used groups have actually worked quite well together (via NBA.com): 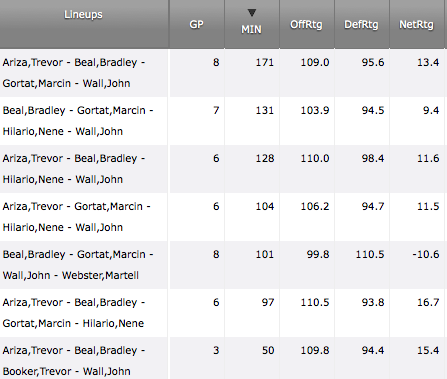 So we know the Wizards at least have a few pieces that work really well together, and the next goal is surviving those minutes when they need rest. Obviously, that's been a massive issue for this team, and one of the biggest reasons why we're sitting here wondering what the hell has happened. But don't be mistaken, because even with Wall not right, this team is beating up opponents most of the time that he's sharing the court with other good players. The plan has always been to surround him and Beal with quality talent, and when they've done that, the Wizards have produced good results.

Unfortunately, that hasn't happened often enough, and the guys that come in to replace them have been inadequate. It's left the fans, the coaches and everyone else involved in a precarious position, because after trading a first-round pick, there's no other choice really but to trek ahead and hope things get better. It could happen, but as I've explained over the last 1,000 words, some real problems need to get addressed. Otherwise, hopefully we'll be giving that pick up in 2015 after nabbing Julius Randle or Jabari Parker next summer (but no I really don't want to talk about the draft yet).