Heads out of butts: Examining the key stretch that put the Spurs game out of reach

Was there anything to Nene's angry words towards the Wizards' young players following their collapse in San Antonio? A look at the critical stretch that cost Washington the game says yes.

Share All sharing options for: Heads out of butts: Examining the key stretch that put the Spurs game out of reach

As I'm sure everyone saw, Nene was really pissed at unnamed young Wizards after the Spurs loss, saying those players need to "get their heads out of their butt." Here's the full quote, for those who missed it:

"Our young guys must take their heads out their butts and play the right way because I'm getting tired of this," Nene said after the game while praising the unselfish play of the Spurs. "I'm going to be honest. The way [the Spurs'] young players play, it's beautiful because they commit to do the right thing. They move. They cut. They help each other. It's amazing the way they play, simple basketball. I wish our young guys who think they know a lot of things, who think they are smart and they just got in the league. What make me mad, after a game like that, they look at stats."

We don't know who Nene was talking about, but we can make an educated guess seeing as only two young players -- John Wall and Bradley Beal -- played significant minutes. We also can guess what stretch in particular frustrated him and the team: the Wizards were blown out soon after they cut the lead to 60-57 midway through the third quarter.

But who really is at fault for this collapse? Let's take a look at some of those possessions in the immediate aftermath:

OFFENSIVE POSSESSION 1: After a missed Patty Mills three, Wall nevertheless wants to orchestrate in the half court and does not sprint ahead looking for an outlet and a fast break. Once he gets there, he calls a pick and roll play, hoping to create something for someone. Problem is, this is how the Spurs defend it. 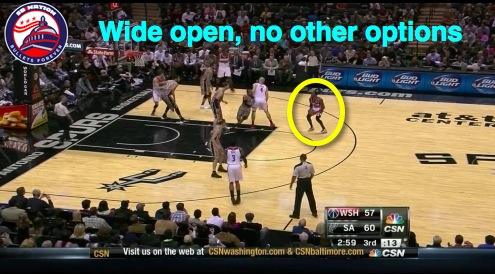 This is a common coverage against Wall and one reason he's struggled in half-court situations. He could try to drive, but the spacing is cramped on the right side. His only play, really, is to shoot with confidence.

Fault Wall for not trying to push the ball or for his play-calling, but it's hard to fault him for this attempt.

DEFENSIVE POSSESSION 1: After the miss, the Spurs speed it up and are going to run a drag screen in transition. The Wizards, specifically Bradley Beal and Jan Vesely, have no clue what's coming. 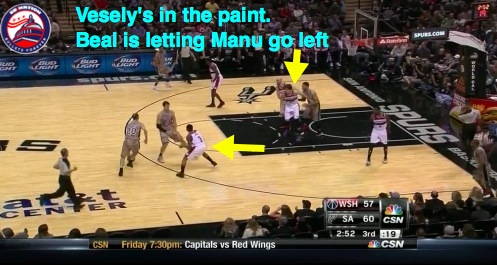 This is a concentration lapse by both players. Beal has to be on Manu's left hand to force him baseline, and Vesely, who is guarding Splitter, has to come out and show for the screen now that Marcin Gortat has recovered to Tim Duncan. This isn't as obvious an error as you might think, but it's right up Nene's alley.

OFFENSIVE POSSESSION 2: This time, Beal advanced the ball up the wing and ran a side pick and roll with Gortat that was broken up when Beal stumbled on the drive. He recovered in time to give the ball back to Gortat, but nobody came to collect it from him, forcing Gortat into a long jumper that air-balled. Beal had tried to cut backdoor, while Wall was standing flat-footed on the opposite side. 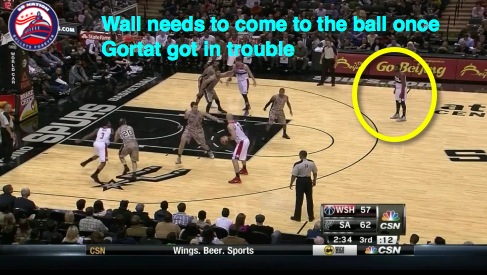 DEFENSIVE POSSESSION 2: Lots going on here. First, Beal staggers back in transition, forcing his teammates to account for him and get their matchups confused. 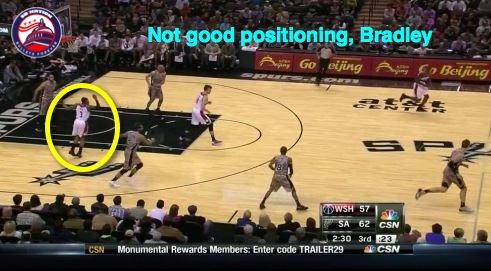 That causes a bunch of problem. Martell Webster picks up Belinelli, but then leaves him for an ill-fated double team on Tiago Splitter in the post for a wide-open three. Meanwhile, Wall is kind of hanging around the paint instead of picking someone up. This is a concentration breakdown by everyone, but Webster made the biggest mistake. 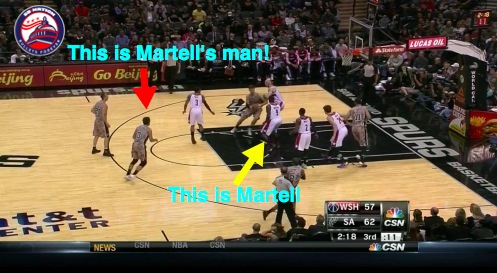 OFFENSIVE POSSESSION 3: The Spurs again gave Wall the Rodney Dangerfield defense, and a confused Wall doesn't attack, instead swinging the ball to Webster late in the shot clock for a wild three that misses. Wall then hangs his head for a split second and runs to Mills, but because Webster shot from the corner, Belinelli has a head start and sprints by him on the leak out. Wall tries to recover, but his man, Mills, gets open because of that and hits a three.

OFFENSIVE POSSESSION 4: Wall calls another slow-developing pick and roll play that turns his teammates into statues. Look at the shot clock when this play begins. 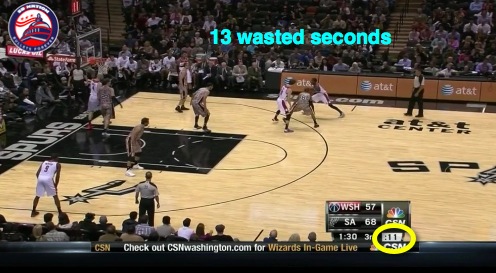 With nobody open or cutting into open space to give Wall an outlet, he crossed into the lane and throws up a wild floater that misses badly. It's clear the Wizards, and Wall, have lost their way, and it probably would have been a good idea in hindsight to call a timeout after the Mills three.

OFFENSIVE POSSESSION 5: After a missed Ginobili three, Wall again walks the ball up the court and calls a slow-developing play, this time a Beal/Gortat pick and roll. Note the shot clock: 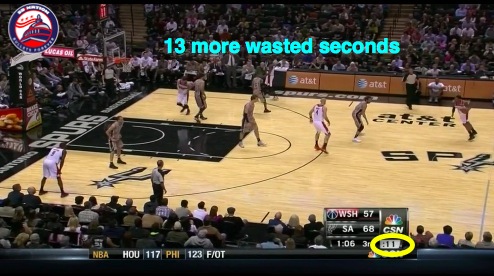 Gortat gives Beal a solid screen going left, and Beal has an opening, but there are a couple issues. Because Wall is in the opposite corner, the Spurs' weakside defender is cheating into the lane. Making matters worse, here's what Beal does with his opening: 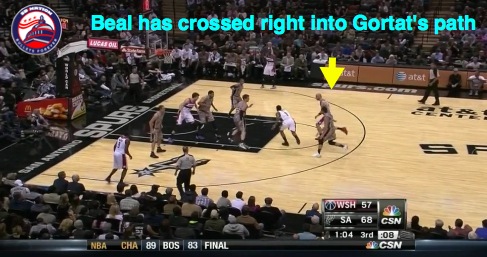 This is not good. Instead of giving Gortat his rolling lane, Beal tries to make a play himself and cuts his own man off. Beal could have pulled up for the jumper going left, or he could have paused and let Gortat roll and occupy defenders. Instead, he goes it alone and, once cut off, kicks to Wall for a desperation three that has no chance.

Umair noted Beal's lack of patience on pick and rolls last season. He appears to have some more work to do.

(Note: Webster eventually got the offensive rebound and found Gortat, who tried to make a post move and missed a jumper in the lane)

OFFENSIVE POSSESSION 6: After a brilliant Ginobili move that nobody can defend, the Wizards ran a flare screen for Beal. The pass is completed, but look at this here: 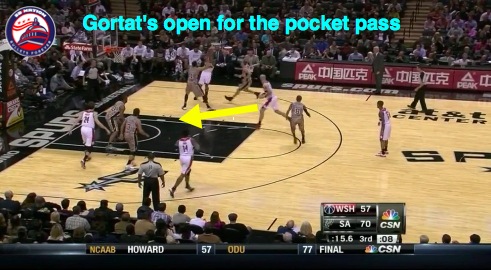 This is another poor decision by Beal, who continues to fire up contested mid-range jumpers with alarming regularity. Gortat has turned and started rolling down the lane, and his man has come to help on him. With a little more patience, the pocket pass to Gortat is open. That Beal didn't even think to look for it is a sign of both his inexperience and, to some degree, what Nene is talking about.

Beal obviously misses, and that's the quarter. Just like that, the 10-0 run killed any chance of the Wizards rallying.

Based on this sequence at least, some conclusions:

We'll see if Nene's outburst changes the situation. This was the Spurs, after all, who do this to lots of teams. Wall and Beal have to deal with a lot of built-in disadvantages, some of which are self-inflicted. Selfishness can therefore be misperceived as anxiousness, stubbornness, a lack of experience or other issues, all of which seem closer to the problem than either being poor or overrated players.

But it seems clear that there was something to Nene's words. They didn't just come out of nowhere.

Wizards vs. Spurs: Washington lays a huevo in San Antonio