The Wizards have a major bench problem

And it's not the coach's fault that it's there.

Share All sharing options for: The Wizards have a major bench problem

Whenever I lurk in our game threads, I always see some variation of the following comment:

"Why isn't [STARTER X] back in? Randy's letting this lead go to waste. This bench needs [STARTER X]."

The comment is on point in some ways. The Wizards have a way of playing well with their starting unit, then seeing things collapse once the bench is put in the game. It happened last night against Dallas, and it's not the first time. The numbers back this up. The Wizards' starting five of John Wall, Bradley Beal, Trevor Ariza, Nene and Marcin Gortat is outscoring opponents by 22.5 points per 100 possessions in the 89 minutes its played, according to NBA.com's stats page, and yet the Wizards are 2-5.

But it's hard for me to fully get behind it because the blame is falling on Randy Wittman's shoulders. It's his rotation that is causing the issues, according to this comment. I'd sympathize somewhat if the Wizards were this deep juggernaut that had hidden talent lurking on the bench, but save for maybe the #FREEGRJR movement, this isn't true.

The problem is simpler: this team has very little bench talent

The problem is simpler: this team has very little bench talent. And it's really hard for any amount of Wittman tinkering to cover that up.

Wittman's already trying, frankly. He leaves Bradley Beal in with the second unit often so it can retain some scoring punch (and there's the added benefit of developing Beal's off-the-dribble game). Last night, he took Nene out quickly in the third quarter so he could bring him back in with the second unit at the beginning of the fourth quarter. When Beal needs a break, he's played Ariza with Webster to get him more minutes given his excellent play so far.

These are patchwork moves, though, and they have negative effects. Beal, in particular, is being stretched way too thin, and I'm convinced it's had something to do with his inconsistent shooting all year. Not only is Beal third in the league in minutes per game, but according to publicly-available SportVU data, he's also traveling more miles per game than anyone in the league. He's not just playing lots of minutes; he's playing lots of tough minutes. All this, remember, is coming after a summer where he was limited while recovering from a serious leg injury.

This is Wittman's catch 22, though. Sit Beal more often, and the offense struggles. Play Beal to counteract that, and you run the risk of wearing him down. The same thing, to a lesser degree, affects Nene, who is currently playing a manageable 30.6 minutes per game, but could be stretched even thinner if this bench ineptitude keeps up. Any rotation tweak brings a cause and effect. Widen the rotation, and more bad players are playing more minutes. Shorten it, and the starters are playing too many minutes. As a coach trying to win games and save a job, I don't blame Wittman for being apprehensive about playing Kevin Seraphin, Trevor Booker and Jan Vesely when they continue to flail around. These Wittman quotes about wanting to shorten the rotation even more may be frustrating, but they're also expected. 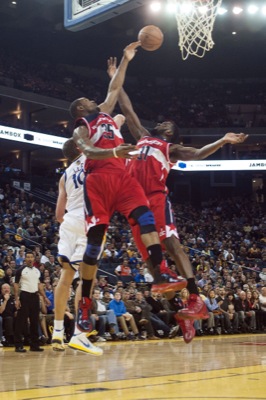 Why the Booker/Singleton/Vesely trio is dragging the Wizards down.

That falls at Ernie Grunfeld's feet, and it's the culmination of several years of bad drafting. Nailing every draft pick in a three-year span is impossible, but nailing as low a percentage as Grunfeld did is a problem. Forget Kawhi Leonard; what if the Wizards had Markieff Morris instead of Vesely? Quincy Pondexter instead of Booker? Tobias Harris instead of Chris Singleton? Avery Bradley instead of Seraphin? Just making one of those swaps makes a huge difference with the bench. Instead, the Wizards have four former first-round picks that give them nothing, a mid-level wing that is miscast in the wrong role and a couple veteran signings that aren't really moving the needle.

It's possible that the Wizards can overcome their bad bench a little better than they have so far. Indiana squeezed enough out of its elite starters and awful bench the past couple years to advance far in the playoffs, for example. But the Wizards' starting lineup isn't as good as Indiana's was. It's not even clear whether it's as good as Portland's was last year, and that Blazers team still couldn't stretch its starters enough to patch up its horrid bench and make the playoffs.

Continued Wittman tinkering, whether it's stretching the rotation or shortening it, may help along the margins, but it doesn't fix the real problem: this Wizards' team lacks reasonable reserve talent. That's on the GM, not the coach.