Magical Pixels is the name of our new, extended recap roundup. Enjoy.

If you're like me, you were watching NBATV around 6:55 p.m. yesterday evening, eagerly awaiting the preseason debut of your 2013-14 Washington Wizards. As the seconds ticked away, your anticipation kept building. If you aren't like me, then you don't understand why someone would be excited to watch an NBA team that went 29-53 last season play in the preseason, and you probably happened upon this post by mistake.

Anyway, we were so stoked, right? Then 7 p.m. struck, and NBATV broke to Wiz-Nets, and we local D.C. fans were so happy to have NBA basketball back, because... 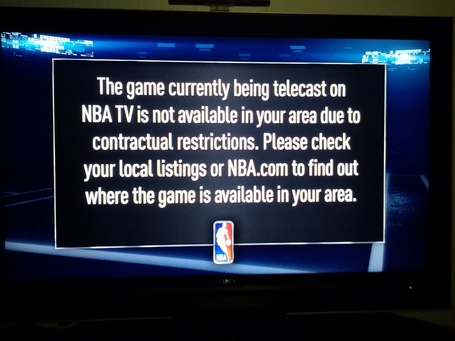 Oh NBA, you slay me. Seriously, it's hard to get people all worked up over a preseason game, but if there's one way to do it, it's to make sure the local fans of one of the teams playing are the only people that can't actually watch the game. Yeah, sure, some of us are fancy and can find an illicit stream on the interwebs, but the vast majority of Wizards fans were blacked out from watching the game. Not cool.

Just a terrific start to the #Wizards preseason! pic.twitter.com/myeUJuMcQ7

Yeesh, they weren't even kind enough to give the Wizards a heads up. As you can probably imagine, Twitter was angry/amused.

.@NBA @WashWizards @NBATV Hard 2 understand how a #Wizards-#Nets game is blacked out in DC when it's not on TV otherwise. #ContractualBS?

@AminNBA Bro, it's not like live sports are a valuable TV commodity

At Verizon Center, fans were (presumably) blissfully unaware of the rejection felt by those of us stuck on our couches looking at the NBA's big, static middle finger. I say 'presumably' because they were distracted by the return of their favorite son.

I found out Andray Blatche entered the game because the fans woke up and booooooed rather loudly. Good times.

Boos for Blatche among the loudest sounds at Verizon Center thus far tonight. He just clanked a free throw.

There aren't a lot of Wizards fans here tonight. But those that are here are booing Andray Blatche quite emphatically.

I wonder if it's confusing for Jan Vesely when he's guarding Andray Blatche and the fans boo loudly.

But then Al Harrington made everyone happy again.

What channel Wiz on?

Oh no, he doesn't know yet.

Anyone got the Wizards game on Comcast? The NBA.tv is blocked & it says it's on local somewhere.

Turned on the Wizards game late and it's blacked out. Wut?

Hey I nearly blacked out watching Vesely grab all those rebounds. RT @SarahKogod Turned on the Wizards game late and it's blacked out. Wut?

You win @NBATV can't do this Wizards stream #SoWizards

The Wizards game is blacked out on NBATV because it's not being broadcast locally, or something. Whatever, I'm blaming hockey.

Right now on TV, in WASHINGTON DC, there are 2 NHL games not featuring the #Caps, and ZERO Wizards preseason games taking place IN DC!

Sad face. And it stayed that way for much of the second half, hitting rock bottom when Garrett Temple had a layup at the rim swatted away with eight seconds to play. Miles Plumlee made a free throw to put the Nets up 97-95. Oh well, nice effort against a very talented Nets team, time to pack it in... 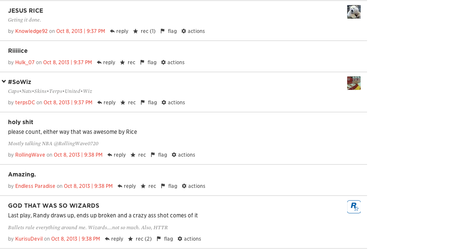 The refs tried to ruin everything by calling basket interference, but then they looked at it and remembered THIS IS PRESEASON: WHERE AWESOME HAPPENS.

We'll need a screenshot of Rice with his arms well above the rim. Kthxbye

Nice play by Glen Rice Jr., that was a smart hustle play by the Wizards rookie. Looks like someone is working OT in the nation's capital.

Despite Rice's heroics, the Wiz still fell in overtime, but whatever, it's preseason. Positives: John Wall looked good, Nene looked healthy, and the Wizards stuck with a superior team. Negatives: The backups stunk, and Jan Vesely balanced out his 12 rebounds with ZERO shot attempts (from the field or foul line) six fouls and three points on 1-for-4 shooting (1-for-2 from the charity stripe).

Sigh. Make sure to check out our Storystream for the game, as well as postgame interviews with Randy Wittman, Wall, Bradley Beal, Rice and Vesely (courtesy of Monumental Network).

Here's a link to some game highlights, including Rice's buzzer-beating slam.