A call to arms: Why Wizards fans should lobby for more national attention

The Wizards' success in the future depends on national perception. This is where us fans come in.

Share All sharing options for: A call to arms: Why Wizards fans should lobby for more national attention

If I have one plea for Wizards fans this season, it's this: Be sensitive. Lobby. Whine about a lack of respect.

Normally, I don't like this behavior. Trust me: media members aren't out to get a team. Nobody is completely objective and we are all human, but trying to figure out subconscious biases is difficult because they are shaped by so many experiences that a fan never knows. The logic people use to suggest a media member is either critical or absent-minded toward a franchise is circular. If they aren't mentioning my favorite team, it must be because they hate them.

But this year is different. For the Wizards to succeed, they need their Q rating to rise. And nothing helps a team's Q rating rise better than the fans and the public. 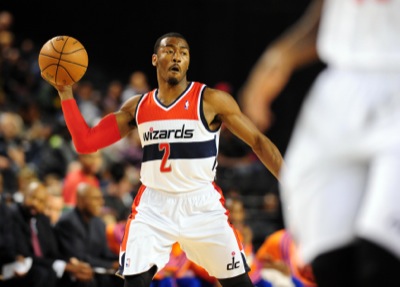 Given the strategy the Wizards have pursued, it's not enough to take a slow step forward. It may not even be enough to slip into the playoffs and lose unceremoniously in the first round.

No, the Wizards need buzz. They need to be decent, sure, but they have to be decent in an entertaining way. They need people with the power to influence the public to think that they are a team on the rise.

The Wizards are playing for themselves, sure, but they're also playing for an audience of 435 other NBA players, or at least the 30 or so that are free agents soon and will help the Wizards take another step forward. The strategy was made crystal clear when John Wall signed his maximum contract. Ted Leonsis' declaration then? This will help the Wizards sign "marquee, brand-name free agents" in the future. Winning, the Wizards decided, was the only way to do that. Playing with other stars is the only way to do that.

But winning isn't enough of a difference-maker for a team like the Wizards. There are other teams in similar spots that are pursuing the same strategy. Atlanta has gobs of cap space after Danny Ferry remade the team. Cleveland, led by Kyrie Irving, has a similar number of young, buzz-worthy players and flexibility for years. Detroit just made two big free-agent moves and has a brilliant young frontcourt. Portland has last year's Rookie of the Year and a retooled bench that can convince its superstar to stay. New Orleans has the league's most intriguing backcourt and a former No. 1 pick coming into his own up front. And just wait until Masai Ujiri does his magic in Toronto.

The key, then, is Q rating. The Wizards are competing with those teams not only for wins, but for national attention. The top free agents in the league will have plenty of up-and-coming teams to choose from when their contracts end, so why should they sign with the Wizards? The only way is because they think the atmosphere is exciting, the infrastructure sound, the surrounding talent complimentary. And the only way for them to even notice and start to think about those qualities is if their new franchise vaults its way into the national conversation.

If SportsCenter's highlight package of a Cavs-Wizards game shows Kyrie Irving more than Wall, complain about it.

So, this is my call to fellow Wizards fans. If SportsCenter's highlight package of a Cavs-Wizards game shows Kyrie Irving more than Wall, complain about it. Lobby for more Wizards inclusion. Carry out a public campaign to get people to recognize Wall, Bradley Beal and the rest of the team as a rising club.

Because this time, you're not just trash talking other fans. You're lobbying for the attention of those brand-name free agents the Wizards want to sign.