Have the Wizards and their fans finally been set free of the Groundhog Day cycle of dashed hopes and lottery picks? Will 2013-14 actually be a different year? Let's talk about it in the SB Nation NBA Season Preview of the Wizards.

You followed them last season. Hell, you've been following them for years. This offseason, you saw some movement. You saw things happen. It felt different. You've been keeping track of comings and goings and dollars and cents, and the season is FINALLY around the corner. So, as part of SB Nation's NBA preview series (you should really check all this out), here's a little quick-hit cheat-sheet to make sure you're (and we're) on our toes for the coming season. Y'all ready for some Wizards basketball? Here we go! 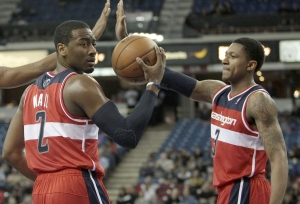 1. What significant moves were made during the offseason?

A lot of moves -- and non-moves -- were made this offseason. The non-moves basically consisted of letting some free agents leave. It also meant seeing some pretty high-level guys from the front office go. But it also meant taking a look at the good that was accomplished last year, taking a look at some of the bad and making some decisions to make the team better.

The biggest move made had to be signing John Wall to the five-year, $80+ million rookie max extension. The jury is still out on whether it was a good move or not -- though based on his offseason leadership moments and his preseason play, I'm leaning "good move" -- but it was certainly a significant move. Additionally, the Wizards decided that they needed Martell Webster and his shooting (and probably his positive locker room presence) back on the team for the next few years. Lastly, the most significant move was to bring Eric Maynor in to back up John Wall after A.J. Price was found to be lacking in this unfortunately very necessary skill last season. Oh, and Al Harrington's here, but that's just fun. I hope it winds up being a significantly positive move.

2. What are their biggest strengths?

Oh, wait. Sorry. Got off track for a second. Well, last year their biggest asset was defense. They were a top-10 defense for most of the season, and their defense wasn't boring to watch. I guess it was refreshing to watch everyone be collectively good at something, you know? They trapped. They smothered. They deflected. They pressed. They boxed out. They took charges. Emeka Okafor's presence in the paint was a big part of their defensive success last year, so his injury will probably have a negative effect on their defense to start the season. But the guard and wing defense on this team was just as terrific. I hope to see more where that came from this year.

3. What are their biggest weaknesses?

So remember that top-10 defense thing? Yeahhhhhhh, not so much with the offense. They were ranked No. 30 most of the year in offense. 30th as in dead last. They were bad. They were better when Wall came back, but they were still not good. With a full year of Wall at the helm, plus an improved Bradley Beal, plus a still sharpshooting Webster, plus (hopefully) Maynor being able to run the second unit so that it doesn't get creamed, their offense should improve.

Another weakness: injuries. I know every team suffers injuries, but it seems like every year there's something. Currently, Chris Singleton is out with a broken foot, Otto Porter's got a strained hip flexor and Okafor has a bulging disk in his neck. Plus, Nene often has issues staying healthy for a full season. And even though Wall's knees seem healthy, this team has been betrayed before by knees, so it's always something lingering in the back of everyone's mind.

Another weakness: the end of the bench. While the Wizards did a great job to shore up their bench this offseason, there's still some issue with the rotation bigs. Harrington, the newest big on the team and the one with the least big-man game, is probably the most reliable. We are still waiting to see consistent production (at a high, medium, or low level -- just consistent) from Trevor Booker, Jan Vesely, Kevin Seraphin and Singleton. With Okafor out for the foreseeable future, we're going to see very soon what this crew is made of.

4. What are the goals for the Wizards?

1. Stay healthy. And for whoever's not healthy: get well soon.

2. Salvage as much of the 2011 draft class as possible (either on-court or as trade pieces).

3. Most importantly: playoffs. Playoffs, playoffs, playoffs. Playoffs or bust this season. This team played .500 ball in the last 50 games of the season, Can that translate into a postseason appearance? They're not even talking about trying to win a playoff series. Just be in the playoffs. The players want it and think they can do it. The management wants it and thinks they've put a roster together that can do it. Other teams in the league think they're capable. The fanbase is salivating waiting for it.

If they don't make the playoffs, then there are a lot of things in play.

Let's assume the team is in the playoff hunt all season, and they narrowly miss making the postseason. Maybe the bottom of the East is suddenly strong this year, and even with a .500 record, the Wizards don't make the postseason. It will feel like a failure in some ways, but it'll probably be more of a tinker-and-come-back-fighting experience.

If they narrowly miss the playoffs and are still under.500 (by a handful or more games), then it'll probably be a stay-the-course and make some bigger free agency moves kind of summer. There are some deals coming off the books (RFAs in Vesely and Singleton, plus Ariza and Okafor are expiring) that will help with this.

If it's clear prior to the trade deadline that this team is dead in the water, then I imagine a big mid-season trade will happen. The aforementioned tradeable contracts will be traded for something to help the team make the playoffs next season.

I would also imagine that it could spell the end for both Randy Wittman and Ernie Grunfeld, but that's just speculation. They're both on the last year of their respective deals, and a playoff appearance would do well for them to keep their positions with the team. A lackluster season and another playoff absence under the same tenure with some core players that the team has recently spent a pretty penny to keep around? That wouldn't be as good.

Oh, and the fanbase will implode into its own existential flow of tears. You can bet on that.

So basically what I'm saying is: this team needs to make the playoffs.