Using the 1-3 pick and roll in late-game situations

The injury to Emeka Okafor has opened a world of opportunity on the offensive end for Randy Wittman. We break down one specific play that can and has been used in late-game situations.

Share All sharing options for: Using the 1-3 pick and roll in late-game situations

If Tuesday night's preseason victory over the Miami Heat was any indication of what's to come for the Emeka Okafor-less Wizards, it's that small ball may very well be Randy Wittman's preferred course of action when closing out tight ball games or giving the team an extra jolt of offense during their notorious third-quarter slumps. Between the array of possible lineups and how comfortable John Wall looked picking apart a scrambling defense with thread-the-needle passes to open shooters along the perimeter, this was the most fluid the offense had looked in quite some time.

It remains to be seen how sustainable the Wizards shooting was on Tuesday night, and opting for offense over defense will not always work out against the offensive juggernauts in the league, but it's a well needed change-of-pace from the league-worst offense a year ago.

The addition of Al Harrington has made all of this possible. His ability to slide over to the center position is essential in this style of offense, but its Martell Webster and Trevor Ariza who may become the X-factors in this lineup moving forward. Their roles are somewhat interchangeable in that they both have a propensity to come off screens, play the passing lanes, and camp in the corners, though it's Ariza who will assume the responsibility of the "power forward" in the traditional sense.

The 1-3 pick and roll (1 being the point guard, 3 being the small forward) is designed to take advantage of the mismatches that small ball lineups will frequently generate. It's a simple action that can cause a lot of confusion on the floor and it could absolutely devastate teams that regularly trap ball handlers. But the beauty lies in how quickly a team can execute it, and if defenses adapt, how easily it can re-calibrate into something completely new, all within the boundaries of a shot clock.

We've seen the 1-3 pick and roll a decent amount this preseason and occasionally last season. Here, in the closing seconds of a tight ball game against the Blazers last January, the Wizards attempt to seal the game with one final bucket. Nene serves as the teams' lone big man with Jordan Crawford and Webster in the corners, Wall as the ball handler, and Ariza on the low block. Wall brings the ball up court, calls off the Nene pick and continues to work down the clock. 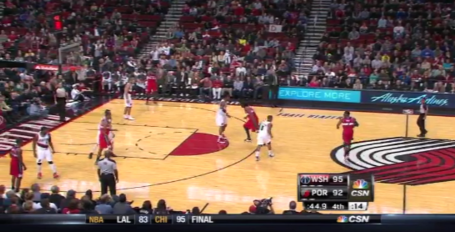 As soon as Nene makes his way to the right block, Ariza vacates the paint and heads to Wall to set the ball screen. But notice as he does this, Damian Lillard fights his way over, paying no mind to Ariza flaring out to the three. Ariza's primary defender, Luke Babbitt, stays to the left thinking they're switching on the pick. 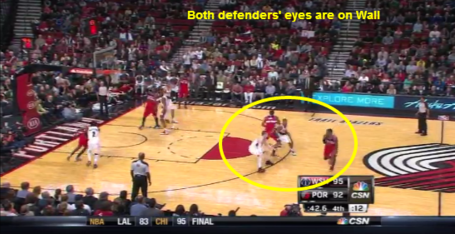 As all of this is happening, Crawford runs over to the paint to set a cross-screen on LaMarcus Aldridge to free Nene on the strong side.

Knowingly, Aldridge avoids the screen and is able to trail Nene. Had Babbitt and Lillard switched on defense, Wall would have still been able to make the entry pass to Nene, who has the entire left side of the floor to work with. However, with two defenders on him, Wall knows exactly where he's going with the ball. 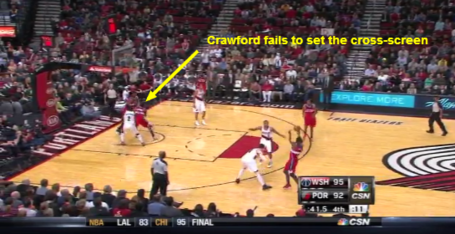 Ariza misses the wide-open three, but it was a beautifully drawn-up play by Wittman. 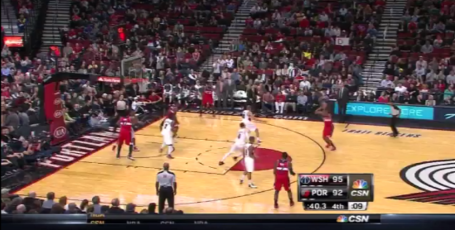 But the Wizards cannot continue to run the same run-of-the-mill 1-3 pick and rolls and expect positive results each time. They'll have to add more layers to their sets to keep defenses guessing. Here, A.J. Price will set-up on the right side of the floor, waiting for Chris Singleton to come over to set the pick. But as soon as Price receives the ball, Ariza will run into the paint to set a cross-screen on Danilo Gallinari. 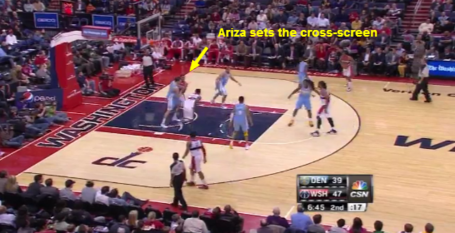 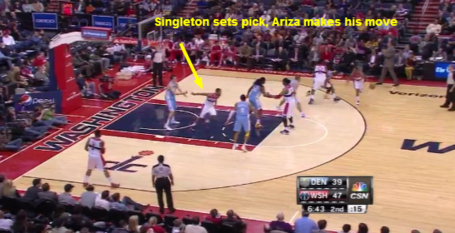 Ariza will purposely set the screen right in front of Nene, and will then flare out to the three-point line. 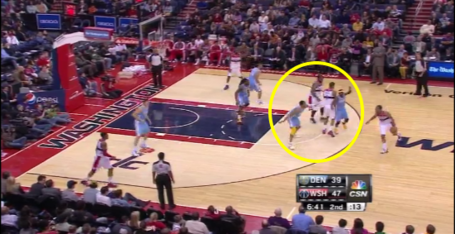 Iguodala quickly sniffs out the play and knows he has to recover to Ariza as quickly as possible. Nene will attempt to screen him off and roll to the basket in order to grab Kenneth Faried's attention. As this is happening, Singleton will position himself right outside the restricted area to give Ariza an open lane to the basket. 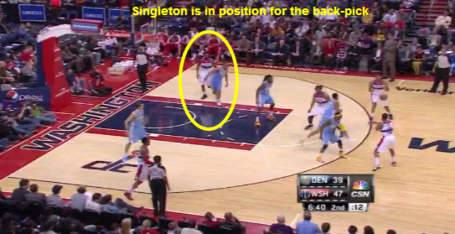 Faried can't completely commit himself to cutting off Ariza's path to the basket with Nene still lurking in the paint. Thanks to Singleton, Ariza has the easy dunk. 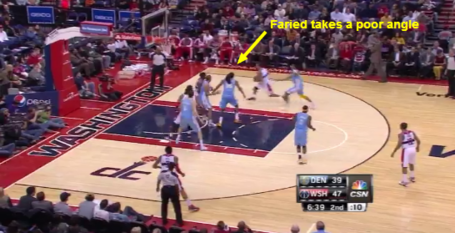 Wittman will continue to work these plays into his offense throughout the season, and in time, they could pay dividends as the team begins to play meaningful games in April. Rather than tinkering with a starting lineup that yielded staggering results when healthy, the Wizards should shift the bulk of their attention over to their late-game rotations, and most importantly, getting Ariza on the floor in small lineups. It's no coincidence that a Wall, Beal, Webster, Ariza, Nene lineup garnered an effective field goal percentage close to 56 percent (albeit in limited action), according to 82games.com. This was by far the highest figure among Wizards lineups playing over 20 minutes.

Closing out games, especially on the road, has been an unquestionable area of weakness for this team since the rebuild, and developing these pet plays to employ in late game situations is imperative for a team seeking the playoffs.