It's only preseason, but Bradley Beal's lights-out performance against the Miami Heat shows just how much he's grown from his rookie to sophomore year.

Share All sharing options for: How Bradley Beal dropped 29 on the Heat and made it look easy

WASHINGTON -- The preseason wasn't going too well for Bradley Beal. He wasn't bad per se, he just didn't leave much of a mark in Washington's games against Brooklyn and Chicago. That changed in the team's third game of the preseason when Washington hosted the Miami Heat.

Beal made his first shot of the night, a 17-foot jumper off a Trevor Ariza pass, early in the first quarter, and from there it was off to the races. Despite the presence of the Heat's veteran defenders, Beal was able to repeatedly get free for jump shots and transition buckets. He finished the night with 29 points on only 15 field goal attempts, tying his career high for points scored. Perhaps just as impressively, every shot was within the flow of the offense, a product of patient, disciplined ball movement and offensive execution.

It'd be easy to simply write this game off as entertaining, but meaningless in the grand scheme of things. Sometimes players get hot or are the beneficiary of a favorable match up, and a decent game becomes a great one. That Beal scored 29 points against the Heat isn't special. What went into it is.

Randy Wittman went out of his way to praise him during his post game remarks, noting in particular how much Beal's demeanor and ability to make split second decisions has improved.

"A year ago at this time, he was scared shitless. Now, he's a different guy-Randy Wittman on Bradley Beal

"A year ago at this time, he was scared shitless," Wittman said. "Now, he's a different guy."

"That's who he was, we saw him grow up last year and take more and more responsibility," Wittman continued. "By the end of the season you could see his demeanor change. Then you had a whole summer and, with the work he put in, by training camp he was a whole different guy. He even came up to me before the first day of practice at training camp and said to me, 'Man, I feel so comfortable. Last year I didn't know what I was getting myself into.'"

It would have been understandable if Beal had been a little spooked by the Heat. Still one of the youngest players in the league, the second year guard spent his adolescence watching players like Wade and James every night on television and playing as them in video games. The Heat are still riding high after their most recent title win, and Beal's last game against them, a 99-71 defeat that saw him score only nine points, could have only made the night seem even more hopeless.

But instead of backing down from a tough opponent or even coming out firing to overcompensate, Beal played his game and didn't let anything, even a brutal match up with Wade, phase him.

"I have a whole year under my belt. I know how he plays, he knows how I play. I've gotten better, he's gotten better. It's just me staying confident and being aggressive. Last year, I wasn't aggressive at all." Beal said.

Beal entered the second half with 17 points, and the Heat made a few defensive adjustments. After spending much of the first quarter focusing on containing John Wall's penetration, Dwyane Wade and Udonis Haslem trapped Beal as he ran a pick and roll with Trevor Booker. Despite the suddenly-swarming Heat defense, Beal didn't miss a beat and calmly passed the ball to a cutting Booker for an open dunk. It sounds simple, but this is the kind of situation that a lot of players struggle in. There's literally a split second to not only decide what to do, but to then act. Like many youngsters, Beal struggled with these situations when he initially entered the NBA, but has handled them like a veteran since. 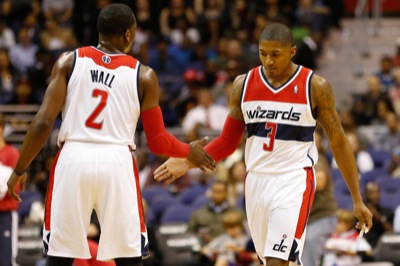 Satchel Price on why Beal will be that guy.

After the game, Booker was all smiles when it came to Beal.

"Lights out. He stepped up big for us tonight. He played like an all-star," he said

Despite the increased defensive pressure, Beal was able to continue to score at will in the second half, pouring in 12 points on 4-5 shooting while continuing to get all of his points without breaking the offense. Wittman said Beal's success came from his willingness to stay in attack mode and stick to what he does best.

"He maintained his aggression. He made shots, took it to the basket, one-two dribble pull ups, open threes, he had the gamut of shots and he was smart on each one," he said. "He had an opening to get to the rim, he got to the rim. They're a very good team, you don't get all the way to the rim against them very often, and when he knew he couldn't get to the rim, it was a one-two pull up before they could recover to him. And those are things he's been working on, so it's good to see those things pay off."

There are a lot of players who can get points, but what separates a player like Beal from the J.R. Smiths and Jamal Crawfords of the league is that he's able to have big-time scoring nights without breaking the offense. He knows what he excels at and rarely gets away from it. His ability to balance this controlled approach to the game with the aggressiveness required to be a big time scorer in the NBA is rare among NBA players, and youngsters in particular. And this method of scoring both contributes to and benefits from ball movement.

One quality that both halves of last year's Finals match up shared was impeccable ball movement. The flip side of this is that offenses built around ball dominant players who don't make the extra pass never seem to go anywhere. How many rings has Carmelo Anthony won? How about Rudy Gay? Allen Iverson? These players might have been able to get a an acrobatic, almost impossible-looking shot off any time they felt like it, but you always got the sense that it was at the expense of the team.

Beal's not like that. Beal can score at a rate of almost a point a minute against the defending champs and make it look like just another day on the job.

Heat vs. Wizards: Bradley Beal stars as Washington wins in a rout