Here's a bunch of John Wall shoes with 'playoffs' on them

The journey to the playoffs starts with a single step, and John Wall is making sure that step has the word "Playoffs" on it. We imagined what this might look like.

Share All sharing options for: Here's a bunch of John Wall shoes with 'playoffs' on them

As you've probably heard by now, John Wall is going to be writing "playoffs" on all of his shoes this season. And hey, that's awesome. We're all about going to unusual lengths to ensure one remains motivated.

With that in mind, we wanted to give John Wall a few creative ways to inscribe his goal on his shoe throughout the year. Otherwise, it'll get pretty tiring just seeing PLAYOFFS in black Sharpie on the side of his shoe every night.

1. Write PLAYOFFS on the bottom of his shoes

(Yes, John Wall's handwriting looks just like that handwriting font on your computer. We're as surprised as you are.)

Sure, John Lucas III might be the only one who gets to see it, but that's okay.

Haters gonna hate. And if they're gonna hate, make 'em hate all the way by using some Myspace glitter text. Maybe next time you won't leave John Wall out of your top 8. 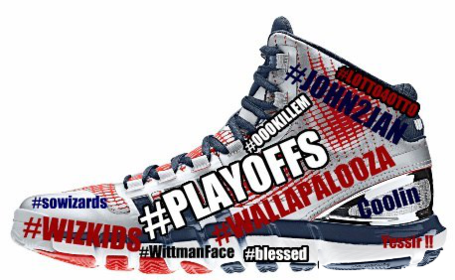 If John Wall is looking to tap into a slightly more relevant social network, he could really generate some buzz by adding a hashtag for "#PLAYOFFS". And if he's going to do that, he might as well keep add some other hashtags and sayings from Twitter while he's at it. Please RT.

4. Skip the shoes and get Playoffs tattooed on his foot 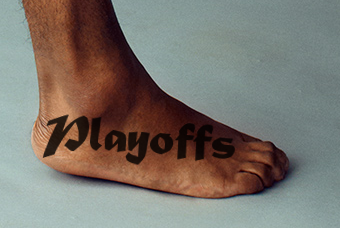 Honestly, this makes more sense than anything he could put on his shoe. There's no better way for John Wall to generate more criticism -- and thus, more motivation -- than get another tattoo.