Taking a look at one of the Wizards pet plays, the triple baseline screen. How effective is it with John Wall in the lineup?

When John Wall made his return following the New Year last season, the entire Wizards playbook opened up and finally, fans were able to see just what GM Ernie Grunfeld envisioned with this team following a busy offseason. While many skeptics voiced their concerns over the lack of shooters surrounding their dynamic young point guard, the coaching staff had ideas over their own to help diversify the offense and provide Wall with the floor spacing he was never afforded since entering the league.

The triple baseline screen (or "Loop") serves as a way of getting the speedy Wall in motion while simplifying his reads. For an offense without a premium of ball handlers capable of freelancing once a play breaks down, this set can trigger several actions such as a pick and roll, a flare screen in the corner or elbow, a post-up opportunity, or a Wall drive to the basket.

This set starts off with the point guard dribbling up the right wing and performing a dribble hand-off with the shooting guard. Wall will then run through a series of screens in order to free himself from his primary defender to get the rest of the defense scrambling. After running through the initial screen set by a big along the baseline, the small forward will cut into the paint and set the screen right under the basket. The third screen is set by the second big stationed at the weak-side elbow, but as soon as Wall runs around it and receives the pass, the big that set the first screen will have already darted over to his side in order to initiate a pick and roll.

As soon as Wall completes the hand-off, Okafor has to be in position to screen off Eric Gordon cleanly to prevent him from lock-and-trailing. The onus is placed on the bigs to set a wide base in order to create contact with Wall's defender, but it's also on Wall to zip around these screens as tightly as he can. 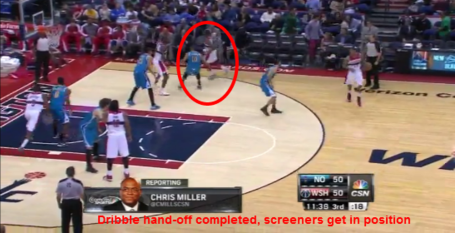 Now Wall has a step on Gordon, minimizing the importance of the second screen. Martell isn't likely to set a screen to the effect of Nene or Okafor, so while he'll attempt to thwart Gordon's pursuit of Wall, he's more concerned over popping out to the right elbow and keeping his defender out of the lane. 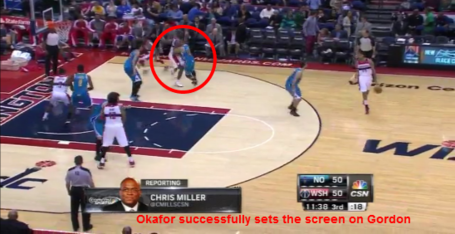 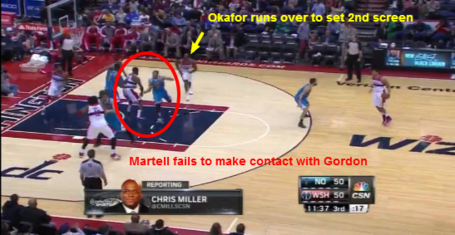 Gordon takes a shortcut and tries to undercut Wall's route rather than meeting him to his spot, a common mistake among guards refraining from constantly fighting over screens. This gives Wall another step on his man, knowing he still has Okafor's pick to go over. 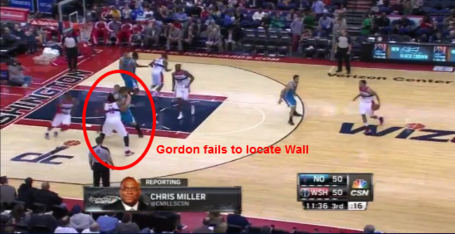 Wall receives the pass and Okafor sets the pick on Gordon. Meanwhile, Garrett Temple, who just made the entry pass to Wall, runs to the weak-side corner. 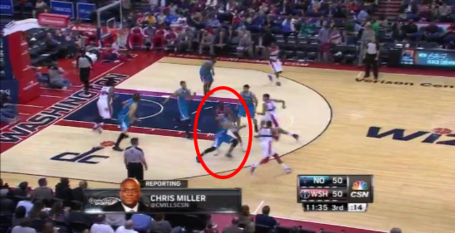 Now look at all the real estate in front of Wall. He takes full advantage of it by hitting the floater in the lane, but he also had a safety valve in Temple in the corner unguarded. 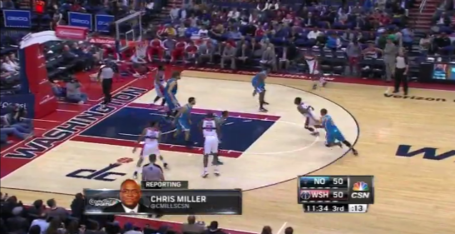 Wittman and his coaching staff have also figured out ways to use this set to get Martell open looks from three. Here, the Wizards are in the exact same alignment, but instead of Wall handing it off along the sideline, Webster pops out above the break. Wall will make his usual run through the series of screens. 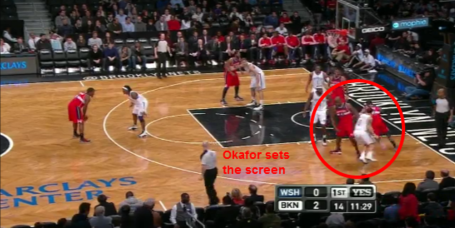 However, rather than the center sprinting to the other side to set the pick on Wall's defender, Okafor stays on the right side to set a flare screen on Webster's man. 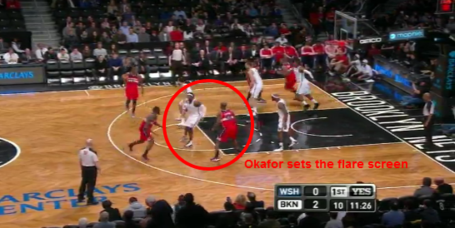 Webster is wide open at the elbow. Gerald Wallace had no chance of making a recovery in time to contest Webster's shot, and Reggie Evans had already sagged off too far into the lane to switch on defense. This is an easy catch-and-shoot situation for one of the best shooters in the league. 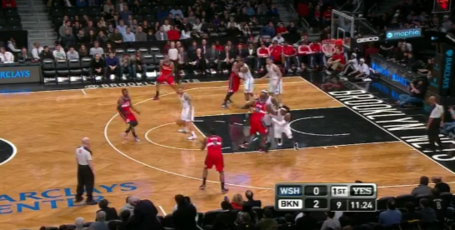 The Wizards ran the loop a number of times at the beginning of each half with Wall last season, but not much outside of that. Teams rarely run these plays in succession or even more than two or three times a night in order to keep defenses on their toes. However, at the very least, deploying these sets when the team is in desperate need of a basket would go a long way toward preventing those dreaded third quarter slumps or in the final seconds of a close game.