Washington's starters looked good in the team's preseason loss to the Brooklyn. The bench? Not so much.

Share All sharing options for: Is bench scoring the Wizards' biggest weakness?

WASHINGTON -- Last night's Wizards preseason opener to the Nets was a weird game, one in which Brooklyn's core only played 12 minutes and Washington's core all played less than 30. It's hard to make definitive judgments from an unremarkable game like this. But one thing stood out, clear as day: Washington's bench can't score to save its life.

Despite facing Brooklyn's reserves for three quarters and an overtime period, Washington's offense was awful when John Wall and Nene left the court. There are players who will come off the bench who can score from time to time, most notably lottery pick Otto Porter, Al Harrington, Kevin Seraphin and Martell Webster, but all of them are very reliant on a good set up man to put them in positions that cater to their strengths. Despite the best efforts of Eric Maynor, that more or less didn't happen against the Nets, and the team was forced to rely on garbage buckets and free throws to get most of their points.

After the game, Randy Wittman raised the issue of the bench's ineffectivness, blaming a lack of time spent playing together. 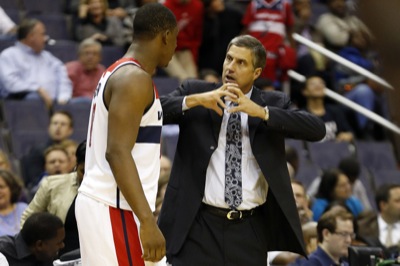 Jan Vesely and Kevin Seraphin were up and down in their preseason debut. One must emerge to replace the injured Emeka Okafor.

"The second unit in the second quarter struggled a little bit to find a rhythm. I think we scored five points in the first six or seven minutes of the quarter. We ended up knotting them at 20 at the quarter break, but a lot of guys were playing with each other for the first time in terms of that second unit," he said.

Realistically, though, everyone knows what these players strengths and weaknesses are, and its hard to see how they can come together to form a unit that can manufacture points at an acceptable rate. While everyone associated with the bench, even the big men other than Vesely, can shoot, no one other than Maynor is any better than average as a passer. There are a lot of guys in that second unit who can finish plays, be it off of dunks, three pointers or even attacking off close outs a la Webster, but there's no one to set them up. As a result, the team wound up forcing a lot of bad shots while players who can't or won't take them got phased out.

That playmaking responsibility should fall to Maynor, and whether he's able to round into shape and demonstrate the gift for playmaking he showed during his stint with the Oklahoma City Thunder. He finished the game against Brooklyn with three assists and three turnovers, but to his credit, he looked good with the ball and its not hard to imagine him becoming the type of guy who could get six or seven assists if he was given starters' minutes.

If Maynor isn't able to play as well as he did before his knee injury, though, Washington could be up a creek without a paddle. Seraphin has shown improvement when dealing with double teams in practice and the pre-season game, so it's possible he could go from a comically-inefficient black hole to someone who's still a black hole, but at least doesn't hurt the offense every time he shoots. Glen Rice, Jr. also looked very good against the Nets' second unit and could carve out a niche as an instant offense guy in the vein of JR Smith or Marcus Thornton if his best case scenario comes to pass. And Harrington has thrived in instant offense roles in the past, so if he can turn back the clock, he could be the answer to the team's prayers.

It's only the preseason, it's still early, and not everyone is healthy, so there's no need to hit the panic button quite yet. Keep an eye on the bench, though. If Wall and Beal play well and Nene stays healthy and the team still isn't winning games, the bench could be the culprit.