Wizards Vs. 76ers final score: Washington fumbles the game away in Philly, 92-84

Eighteen turnovers dug the Wizards in too deep of a whole, and even a comeback in the last five minutes couldn't dig them out. Washington fell, 92-84.

Share All sharing options for: Wizards Vs. 76ers final score: Washington fumbles the game away in Philly, 92-84

Another game. Another loss to snuff out the excitement of last week.

Last week, the Wizards were riding high on the return of John Wall, a 4-3 road trip record, a Steez-ful game winner, a 5-game win streak at home, and a whomping of the Bulls. Then a sloppy loss to Sacramento followed by a sloppy loss to Philadelphia, and just like that Wizards fans hopes of their team vaulting up to the 8th seed of the East are yanked back into reality.

The injury bug hit the team tonight again. Bradley Beal sat out the game to try to heal his ailing wrist. Garrett Temple got the start in his place, and he was the only starter without a turnover! His defense went a long way to keep the Wizards in the game, especially with a nice chasedown block and some aggressive coverage during the Wizards' run at the end of the 4th. But it was all for naught, including another wasted double-double for Emeka Okafor (15 and 17).

This was John Wall's shot chart tonight (courtesy of NBA.com). 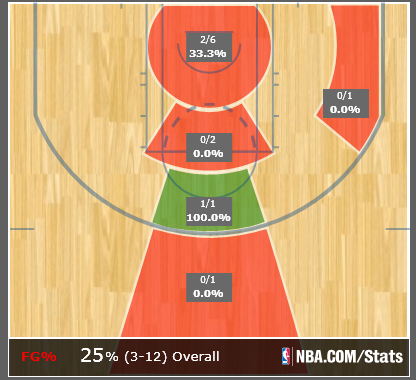 Credit to Philly, though. They played a tough game all the way through, and newly-minted All-Star Jrue Holiday gave everyone on the Wizards--especially Wall--fits. He's a special player. Glad he's getting to shine.

Next game is Friday in Memphis, against a newly-structured Grizzlies squad. Hopefully the Wizards can figure out how to get all the slipperiness off their hands by then. Man, you can see how jarring this game was when I didn't mention Nick Young once in this recap.

What did you like from this game? Anything to take away? Sound off in the comments. Let me start you off: TURNOVERS ARE THE DEATH OF US.