The Wizards were victimized by an Isaiah Thomas buzzer beater, and afterwards, they couldn't properly explain what happened.

WASHINGTON -- The chaotic end to the Washington Wizards' 96-94 loss to the Sacramento Kings did not get any clearer following postgame interviews. The game ended when Isaiah Thomas hit a floater in the lane with one second left to give Sacramento the win. That much was clear.

But the most maddening part for Wizards fans is that Randy Wittman elected to put Garrett Temple in the game to guard Thomas despite Temple not playing the entire rest of the contest, save for one short possession where he came in to foul with the Wizards down one with 13 seconds left. Temple is regarded as a good defender, but you almost never see a coach put a player in cold at the end of the game.

Thomas ultimately beat Temple to his left -- his strong hand, mind you -- and hit the game-winner in the lane. Afterwards, everyone seemed pretty confused with what happened.

Wittman, while admitting that he needed to see the play again to confirm, said that Temple only guarded Thomas on a switch.

"I think they actually switched. They may have switched after the play. We were supposed to switch everything. I have to look and see if Garrett actually started on him, but Garrett is one of our better on-ball defenders."

"We just switched. They set screens and we switched the whole thing up."

Re-watching the play, I'm not sure what either of them are talking about. Here's video.

And here's the photo above, once again, which clearly shows that Temple began the play on Thomas, with Wall on Jimmer Fredette. 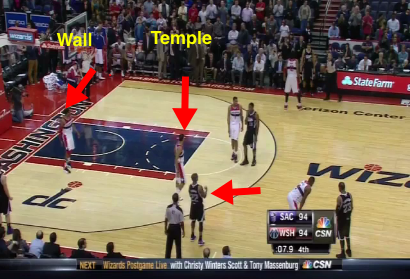 Thomas did run off a screen to initially get the ball, and he then did run a pick and roll with Francisco Garcia, but the two other Wizards defenders involved were Trevor Ariza and Nene. Neither switched any screen. So, I'm really not sure what to make of all that.

One thing that was interesting: Wall giving this quote at the end of his answer about whether he began the last play on Thomas.

"It was tough to put [Garrett] in that situation, especially with him not playing the whole game until the end," he said.

I agree with Wall on that one, that's for sure.