Since John Wall has come back from injury, Bradley Beal has improved his game, and Randy Wittman found a new way to use his rookie sharpshooter.

Already on his way to another Rookie of the Month award, Bradley Beal has been even better with John Wall back from injury. Let’s take a look at how Bradley Beal’s game has changed since Wall returned and one interesting play they can use in the future.

The shot chart below shows Bradley Beal’s shot distribution in his 31 games without John Wall in the lineup (all shot chart data via NBA.com). 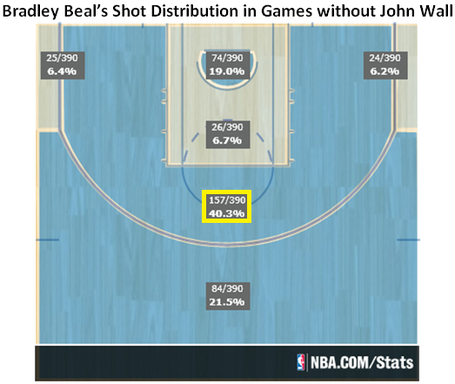 In those games without Wall, 40 percent of Beal’s shots were coming from midrange (highlighted in yellow), a number well above any other areas of the court. He also wasn’t getting many of those "easy" corner threes, as most of his three-point attempts came above the break.

Looking at the distribution of Beal’s shots in games with John Wall back in action, it’s easy to see how Wall has helped. 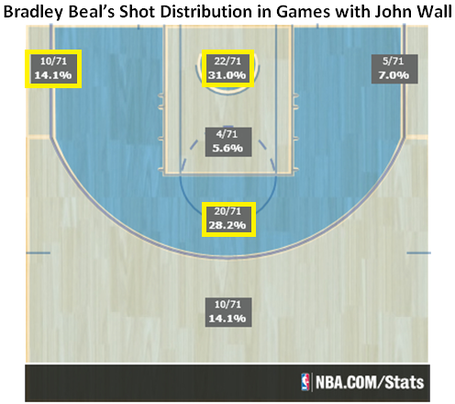 Beal has replaced a bunch of those midrange jumpers with shots from much more efficient areas. In the past six games, Beal has taken more corner threes than above-the-break threes, and he’s getting many more shots at the rim. (Beal's shot distribution with Wall on/off the court shows a similar pattern, but I couldn't make neat shot charts with that data.)

Beyond Wall simply helping in the halfcourt offense, Beal’s improved shot distribution is also due to Wall’s ability to push the ball in transition. In the six games with Wall, Beal has seen 4.2 transition plays per game, an increase from the 2.9 he had prior to Wall's arrival. As you can guess, most shots in transition are layups or threes. Wall has created shots for Beal out of situations that the replacement point guards could not. Specifically, Beal has had success running to the corners on the fast break (Wall has a great eye for finding corner threes), and Wall has done an excellent job in finding him through heavy traffic. The clips below show a few examples of this. It’s hard to imagine the other Wizards’ point guards pushing the ball in transition, drawing the defense, and then threading a pass through defenders' arms. Beal is getting the easy looks that he wasn't seeing in his first 31 games.

Now that Beal has mastered the transition three, it' time for him to work on making his transition layups.

One new wrinkle that the Wizards can add to their offense is putting Wall and Beal in a pick-and-roll together. This season, Beal has only taken two shots as a roll-man in the pick-and-roll, and he’s made both. After watching the success of the play below, Randy Wittman may want to use Beal as a ball-screener more often.

Trevor Ariza’s action on the baseline gives the defense three separate options to guard: Wall coming off of the ball screen, Beal popping to the three-point line, and Ariza running off of a double screen from the baseline. If you replace Ariza with a real perimeter threat like Martell Webster, then, baby, you got a stew goin’.

John Wall’s return to the lineup has clearly changed Bradley Beal’s place on the team for the better. Beal is handling the ball less and shooting threes and layups instead of forcing midrange jumpers. Although he won’t continue to shoot 60 percent from three, Beal’s shot selection with Wall bodes well for the future.