The future of the Washington Wizards' transition attack

The Washington Wizards have blitzed the Magic and Hawks with an up-tempo offense that has looked better than anything the team has fielded in years. Can Washington keep this up, and what will be the secret to sustaining these improvements?

Share All sharing options for: The future of the Washington Wizards' transition attack

The Washington Wizards' offense has been shockingly competent lately. Powered by a surging Bradley Beal, a returning John Wall and Nene, Washington's up-tempo attack has been a difference-maker during the team's three-game winning streak.

Can this uptick in efficiency last? If last year's performance is any indication, it should.

Brilliant as Wall can be at times, Washington's offense wasn't better solely because of his ability to drive and dish in the halfcourt. The 2011-12 Wizards were an up-tempo team that played faster than all but eight other NBA teams that year and that seemed to get at least one or two buckets a night thanks solely to Wall's ability to be a one-man fast break. With Wall out of the lineup this year, Washington has sunk to 17th in the NBA in pace while getting out in transition far less. 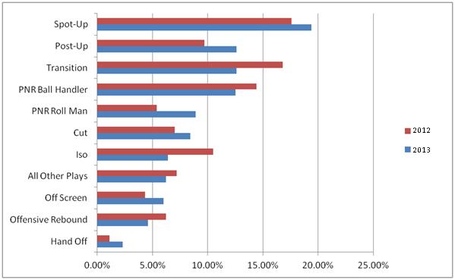 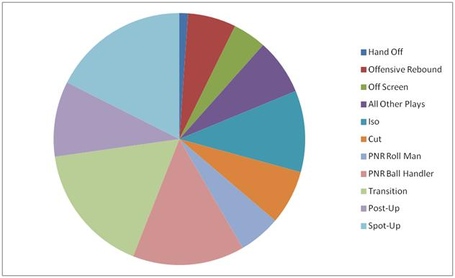 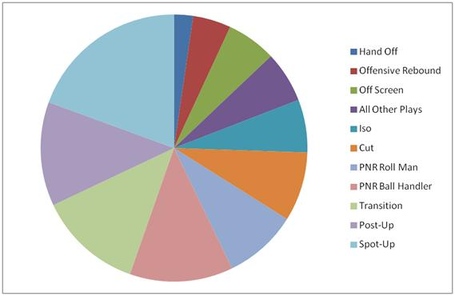 Washington, with its poor point guard play this year, has been unable to run out in transition and get the kinds of baskets that a team without a traditional go-to scorer needs if it wants to put points on the board.

Now that Wall is back, Washington can be expected to get out in transition more, run more pick and rolls and rely on fewer long jumpers when the team's guards come off screens, all of which should lead to an improved offense.

Washington Wizards Rankings, By Play, for the 2012 and 2013 NBA Seasons 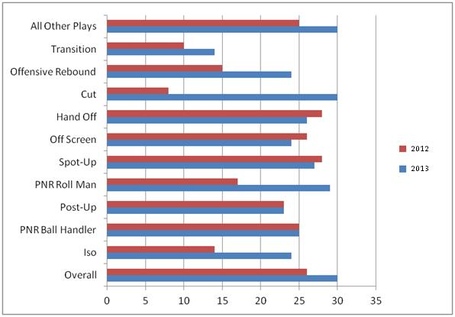 Washington hasn't done anything other than score in transition, off cuts and in isolation situations at an above-average level over the last few years. The team's pick and roll attack, which was never particularly strong to begin with, had dramatically declined in terms of efficiency this year despite a much improved Jordan Crawford, who ranks 65th in the league in points per possessions as a pick and roll ball handler. Having Wall on the floor instead of A.J. Price will allow the team to run the pick and roll more often and more effectively, giving the team another weapon in the halfcourt and creating the kind of defensive breakdowns that can lead to the open looks its spot-up shooters and garbage bucket specialists desperately need.

Of course, that's not to say that Washington's offense will necessarily be good. In fact, it probably won't be much better than it was last year. The thing is, Washington doesn't need it to be better than "meh" in order to win a couple of games as long as the team has a top 10 defense. Matching last year's offensive rating while continuing to hold steady defensively would leave Washington with a point differential of about -2.5 points per 100 possessions. No, they still wouldn't be a playoff team, but they'd be respectable, and that's all fans can really hope for at this point.

Whether or not a change in play distribution is enough to turn around an awful offense is an open question. The odds seem to be in Washington's favor, though, as long as the bar isn't set too high.