Magic vs. Wizards: How Washington ran its way to victory

The Washington Wizards ran all over the Orlando Magic in a blowout victory. How did they do it? With every player working in harmony together.

Share All sharing options for: Magic vs. Wizards: How Washington ran its way to victory

WASHINGTON -- Martell Webster began his answer of my question with a confused look on his face. I was trying to see if he could shed light on why the Wizards have been able to zip by teams in transition lately after struggling so much with this obvious point of emphasis all season. Webster answered like he had been hearing Randy Wittman's voice in his head all season.

"We shoot a higher percentage and now people begin to see. It's like, 'Oh, now they're running,'" Webster said, with that same facial expression. "We've been running the whole time. Now, we're taking advantage of the open shots we're getting and converting them into points."

It's true that the Wizards have tried to run all season, but they certainly haven't do it as successfully as they did in their 120-91 win over the Orlando Magic. The Wizards scored 29 fast-break points, rushing the ball up the floor and making Jan Vesely look like a legitimate NBA player with all his rim runs.

The Wizards had been trying to achieve this pace ever since early December. As much as Webster wanted to say it came down to makes or misses, there had to be a difference, right?

"We didn't always have that sprint up the floor because the ball wasn't always delivered up the floor," Wittman said. "Now, it is, and guys are running harder. Jan is out on the break now and up the floor."

Credit the return of John Wall, of course, but the Wizards were running last night even with A.J. Price playing the point. Was it the chicken (the point guard doing his job) or the egg (everyone else running with him)? Wittman seemed to say it was the chicken, and ultimately, it doesn't really matter. You need both to be successful when you run.
But in rewatching some clips of the game, it does seem like the egg deserves some credit. On this play, watch how Trevor Ariza's conscious effort to sprint up the left wing opens up a three for Price. 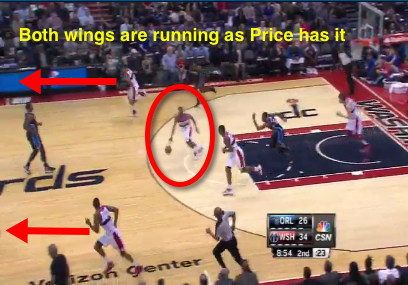 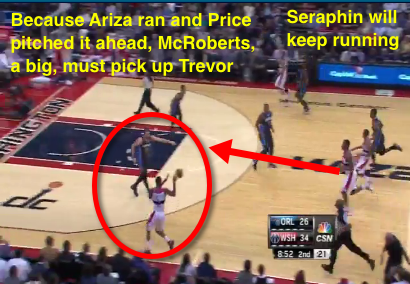 At this point, Price has gotten the ball quickly and thrown a pitch ahead to Ariza. Unless he drives, there's nothing immediately present on this break. But because Ariza still ran hard to get up the court, Josh McRoberts has to switch out on him. Now, watch how the Magic defense gets confused as Kevin Seraphin completes his rim run. 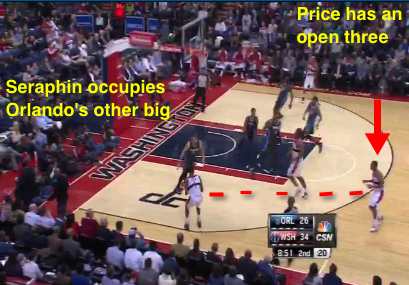 There's Price, open for three. Yes, this was a shot the Wizards sometimes missed before, but it wouldn't have been presented without Ariza's sprint up the floor and Price's conscious decision to pitch it ahead. The chicken and the egg are working in harmony together.

And then, there's Vesely. There's a sense that the only way Vesely is saved as a prospect is to play with John Wall. Wall admitted after the game that he knows how to get Vesely the ball in his spots, hence the alley oops. But Vesely also showed off his speed in the second quarter with a series of rim-runs that aided Washington's fast break.

Here's one that he actually finished. Note where he begins in these first two screenshots. 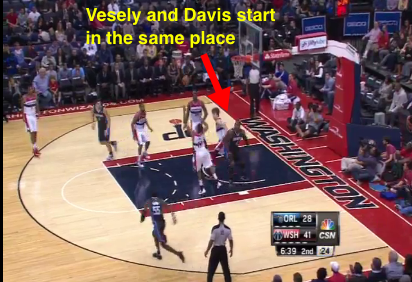 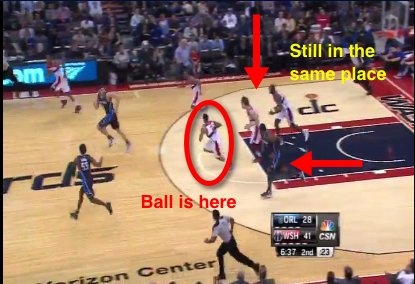 Vesely is under the opposite hoop fighting for a rebound, and Glen Davis is right with him. But with a flick of a switch, Vesely turns on the jets and leaves Davis in the dust, screwing up Orlando's transition defensive recovery. 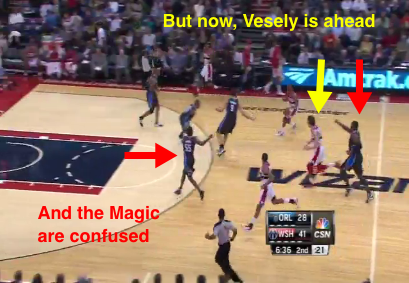 It takes a couple passes, but none of the Magic pick up Vesely, giving him a dunk. 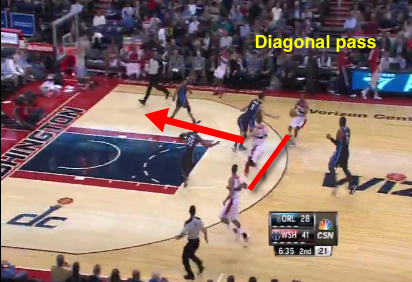 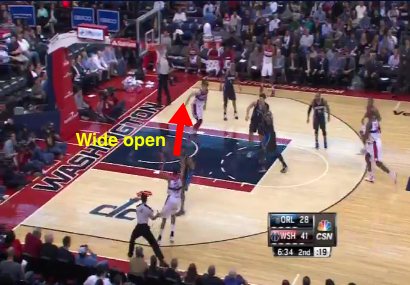 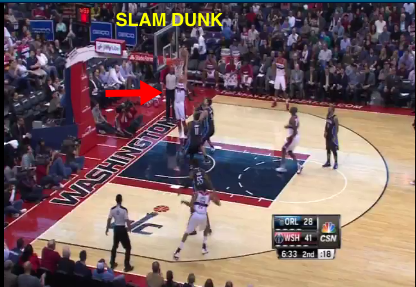 These are just two examples, but there were several more. There's no fancy stat to measure running the floor, but the teams that consistently do it are the ones who get easy buckets. You can bet that the Wizards' next film session will drive that point home.

"I don't know [how to explain it]," Bradley Beal said about the team's recent play. "It just came out of nowhere how fast we're playing now."

In Beal's defense, the explanation is shockingly simple. Run the floor, and good things will happen.

Wizards vs. Magic: Washington has a 3-game winning streak