Share All sharing options for: No Spacing for the Washington Wizards? Just Let Jan Vesely Dunk

As everyone has already noticed, the Washington Wizards are still not rife with shooters. With a bunch of potential 2012-'13 frontcourt combinations having limited perimeter skills, the Wizards will just have to learn to work without spacing the floor. One way they found a bit of success in close quarters last year was by using Jan Vesely's athleticism. Let's take a look at one particular alley-oop play that has had success despite a lack of spacing.

The play starts with Vesely setting a ball screen for John Wall. Looking at the rest of the floor, you can see how compressed the play is. Wall is the only player outside of the three point line, not something you see very often in today’s NBA. As Vesely sets the screen, Tyler Hansbrough hedges hard to force Wall farther away from the basket to stop him from turning the corner. 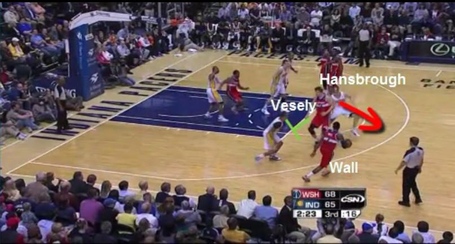 Unfortunately for Hansbrough, this plays perfectly into the Wizards’ hands. Because he stepped out onto Wall, Hansbrough has to cover even more ground to catch up to Vesely. As Vesely rolls to the basket, Roger Mason comes up to set a screen on the recovering Hansbrough. At this point, Hansbrough has no chance to get back to Vesely. 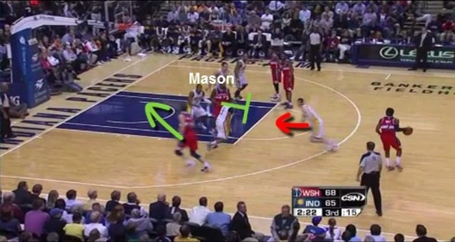 Off-ball defenders Leandro Barbosa and Lou Amundson are of little help. Barbosa ignores Vesely, and Amundson is focused on Wall at the top of the key. Vesely has a free run to the hoop. 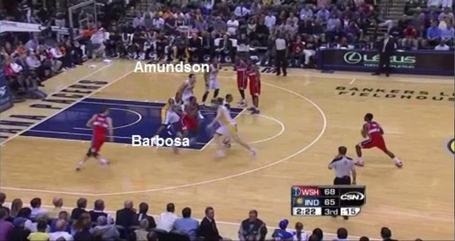 Barbosa and Amundson definitely could have done a better job helping out, but the Wizards’ compressed spacing played a part here too. The defense has a shorter distance to cover when everyone is inside the three-point line, and things have the potential to get clogged. However, defenders can also be more reluctant to leave their assignment simply because everyone is so close to the basket. Amundson, in this case, may have broken up the pass if his defensive assignment was in a less threatening spot on the floor.

Here we see the same play again versus the Raptors. Vesely sets the screen for Wall, and Andrea Bargnani hedges out to Wall. This time, the floor is a little more open with two players outside of the three-point line. 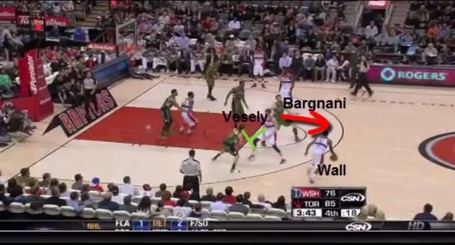 Roger Mason sets the screen on the recovering Bargnani… 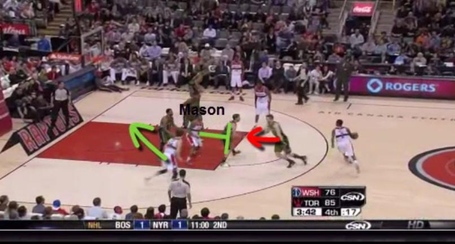 This time, the Raptors help defenders lend a bit more of a hand than we saw with the Pacers. Gary Forbes acknowledges Vesely’s existence by sticking his hand out, which is an improvement over Barbosa’s defense. Meanwhile Amir Johnson drifts deep into the lane and nearly gets a hand on the pass. 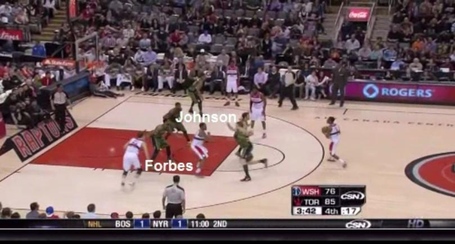 John Wall uses Vesely’s athleticism well here. Few players will be able to backpedal and rise with Vesely, so Wall throws it away from the defender and lets Vesely go get it.

The full plays are below:

Working with condensed spacing will make things difficult, but not always impossible. This alley-oop play to Jan Vesely shows how even in tight quarters, there are some ways to beat the defense.